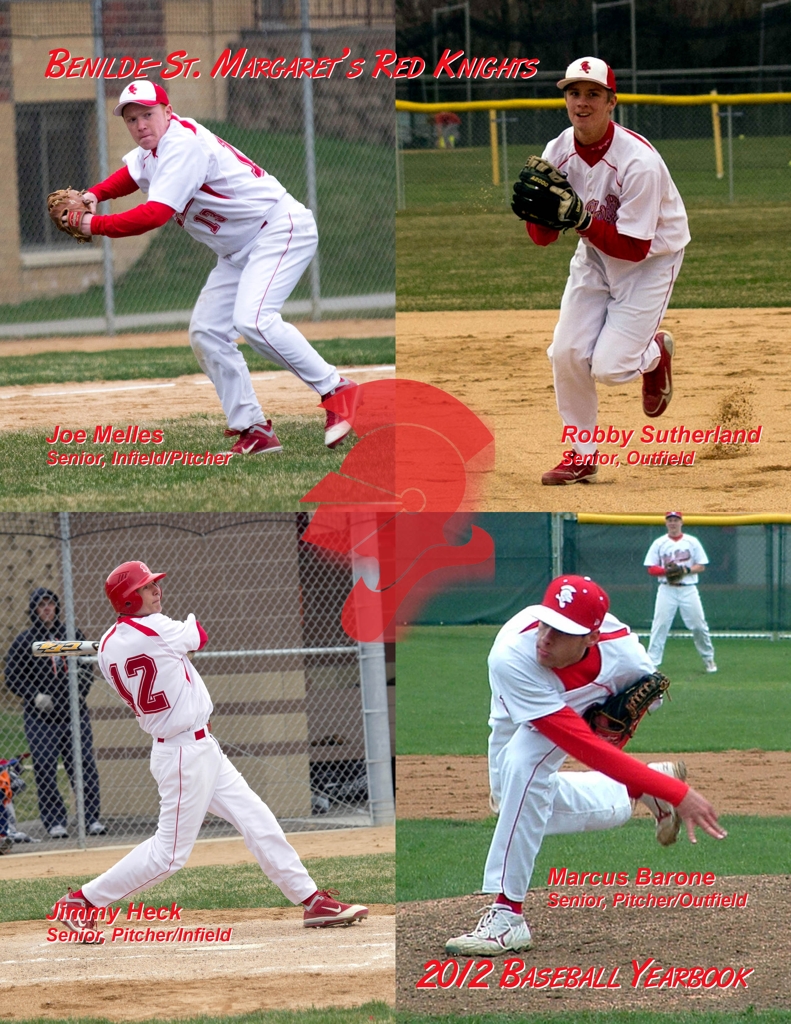 The 2012 playoff bracket for Section 6AAA, updated with rescheduled games from May 26.

Dan Labosky opened the game with a triple, Grant Besse followed with an infield single and the duo combined to go 8-for-8 and reached base in all 10 of their plate appearances, scoring seven runs to lead Benilde-St. Margaret's to an 11-3 win over Minneapolis Southwest in a Section 6AAA second-round game.

The game, which was pushed backed one day because the first round was washed out by rain and then delayed another three days as Saturday's scheduled game was rained out, forced the Red Knights to change their pitching plans as scheduled started Jimmy Heck was replaced by left Willie Falk.

Falk allowed two runs, one unearned in five-plus innings while giving up three hits and a walk with four strikeouts. He kept the Lakers at bay as the BSM offense supported him with 10 runs.

Labosky and Besse both scored to give BSM a 2-0 first-inning lead and the duo each drove in a run in the Red Knights' five-run third, Labosky with a single to left and Besse with a ground-rule double to left-center field.

Gabe MacDonald began the rally with the first of his three walks. Robby Sutherland would eventually single in a run and Joe Melles and Jimmy Heck had back-to-back singles to finished the five-run inning but a larger rally failed to develop as the hosts left the bases loaded after getting six hits and a walk in the inning.

Labosky and Besse began a three-run fifth-inning rally with a bunt single and a walk. Melles also walked to load the bases and Heck followed with an RBI groundout. MacDonald then drew his third walk of the game and pinch hitter Spencer Shaver single in a run ahead of John Backes' sacrifice fly.

The Lakers scored an uneared run in both the sixth and seventh innings but Heck's third RBI of the game, a single which brought home Labosky with his fourth run of the game, added insurance to the Red Knights' lead in the sixth inning.

BSM got solid relief appearances from Both Labosky and Mikey McGill. Labosky walked the first batter he faced in the sixth but retired the next three batters while McGill gave up an unearned run in the seventh but got the last two outs of the game via strikeouts.

With the win, BSM advances to the Section 6AAA Final Four, which is the double-elimination portion to the playoff. The top-seeded Red Knights will face fourth-seeded Wayzata at 4:30 p.m., Wednesday, at Alimagnet Park in Burnsville.

A complete box score, statistics and play-by-play are available here.

Rain and wet field conditions forced Section 6AAA to postpone second-round games, the second time in three days games have been pushed back.

Benilde-St. Margaret's, the top-seeded team in the section had it's 10 a.m. game with Minneapolis Southwest suspended and the two teams are now slated to play at 4:30 p.m., Tuesday, at BSM Field.

The other quarterfinal game whic was slated for Parade Stadium, Saturday, is also being moved to a home site as fourth-seeded Wayzata will host Robbinsdale Armstrong, Tuesday at 4:30 p.m.

The games between second-seeded Hopkins and Bloomington Jefferson, and third-seeded Edina and Richfield, will be played at Breamar Park in Edina as originally scheduled. However, the games are now scheduled for 4:30 and 7 p.m., respectively.

The winners of the 4:30 p.m. games at Alimagnet will meet at 7 p.m. on Field 1 with the losers meeting on Field 2 in an elimination game.

Following a 17-3 regular-season by the Benilde-St. Margarets' varsity team, which earned it a number one seed in the upcoming Section 6AAA playoffs, the Red Knights held their annual awards banquet.

The Freshman team handed out participation certificates and gave out two awards. The Coaches Award was given to Connor Deterding and the Sportsmanship Award went to Joe Kleven.

The B-Squad team was also presented with participation certificates with the Michael Kaminski earning the Coaches Award and Chris Landis being given the Sportsmanship Award.

The varsity team was present with their varsity letter awards along with all-conference and individual awards.

Sutherland also earned the Gonsior Hustle Award while MacDonald earned the team's Sportsmanship Award and Melles was named the winner of the Coaches Award. Heck and Barone were co-Most Valuable Player Award recipients. 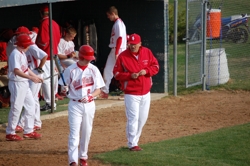 Hoemke took over the reigns of the BSM program in 2008, following five seasons as the Red Knights’ assistant coach.

A junior high English teacher at BSM, Hoemke also is a member of the Red Knight football staff, working with the Junior High program.

A 1983 graduate of St. Agnes, Hoemke earned his bachelor’s degree from Minnesota in 1986.

He and his wife, Jane, have two children; Rachel, 20, a 2010 BSM graduate who played varsity softball and tennis; and Marshall, 15, a BSM sophomore who is a member of the Red Knights’ B-squad baseball team and also plays football. 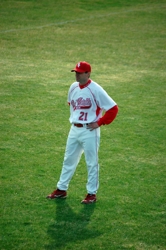 Fred Hennen is in his fifth season as a varsity assistant coach following three seasons as the Red Knights’ B-Squad coach.

He also coached the BSM Mickey Mantle team during the 2008 summer season and was an assistant coach with that team in 2010.

Hennen is a 1994 graduate of Hill-Murray High School where he led the Pioneers to a runner-up finish in the 1993 Class AA state hockey tournament.

He spent one season as a goaltender in the United States Junior League before enrolling at St. Mary’s University in Winona, Minn. He played hockey for four seasons for the Cardinals before earning his bachelor’s degree in 2000.

Fred and his wife, Kirsten, recently celebrated their fourth anniversary and reside in south Minneapolis. They have two sons, Jelani, 7, and Owen, 2. 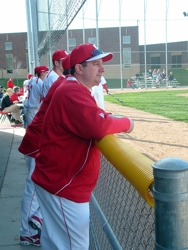 Ryan Collins is back for his second season as a varsity assistant coach after rejoining the BSM staff last season following a three-year hiatus.

In five seasons at BSM’s head, he led the Red Knights to a 92-38 record, including a pair of conference titles and the school’s only state tournament appearance, where BSM finished third in 2005.

A 1990 graduate of St. Agnes High School in St. Paul, Collins returned to his alma mater in 1998, leading the Aggies’ baseball team for five seasons, which included two trips to the state tournament and a Class A state title in 2001. He also served as the boys soccer coach while at St. Agnes.

Collins earned Class A coach of the year honors following the state tournament title and was selected as a Lions All-Star Game coach in 2002.

A 1995 graduate of Minnesota State University, with a degree in physical education, Collins works for Recruiters of Minnesota and is the father of four children; Zach, 15, Carter, 12, Tyler, 9, and Kaylee, 7. He and his fiancee, Kathy, reside in Hugo. 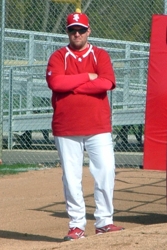 A key member of the BSM pitching staff on the Red Knights’ 2005 state tournament team, Alex Wahl returns to his alma mater to work with the pitching staff.

An all-conference honorable mention selection as a senior, Wahl was 8-0 in 2005 with a team-best 0.62 earned run average, allowing just 43 baserunners in 56.1 innings.

Wahl went on to pitch at St. John’s University where he made 29 appearances in three varsity seasons. He posted a 6-6 career record with one save and a 4.92 ERA for the Johnnies.

Alex’s brother, Zach, was also a BSM baseball player who earned honorable mention all-conference honors in 2010. The pair now play together for Northwest Suburban Redhawks, for which Wahl has played for five seasons and managed the last two. He was also an assistant to Fred Hennen with the 2008 Mickey Mantle Team.

A 2009 graduate of St. John’s, Wahl earned degrees in finance and accounting. He has worked as an accountant at United Health since 2009 and was married in 2010. Wahl and his wife, Amber, reside in Bloomington. 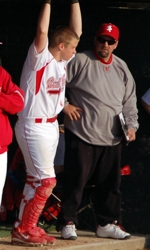 Craig Roberts is in his seventh year with the Red Knight staff. His duties include statistical analysis, scouting opponents, communications and media relations, and assisting with administrative duties.

Much of the last two decades have seen him involved with intercollegiate sports. He’s been part of the sports information staffs at Wisconsin-Stevens Point (1986-1990), Minnesota State, Mankato (1992-1997) and the University of Minnesota (1997-2001). He was also the assistant commissioner for public relations with College Hockey America (2003-2006).

Roberts is a former umpire who has officiated at the collegiate level. In 2000, he travelled to Arizona, where he spent time with Major League Baseball’s umpire training program in the Arizona Fall League.

A 1997 graduate of Minnesota State University, Roberts earned his bachelor’s degree in mass communication. He currently is employed as a Claims Coordinator for Acosta Sales and Marketing in Eden Prairie and he resides in Ramsey.