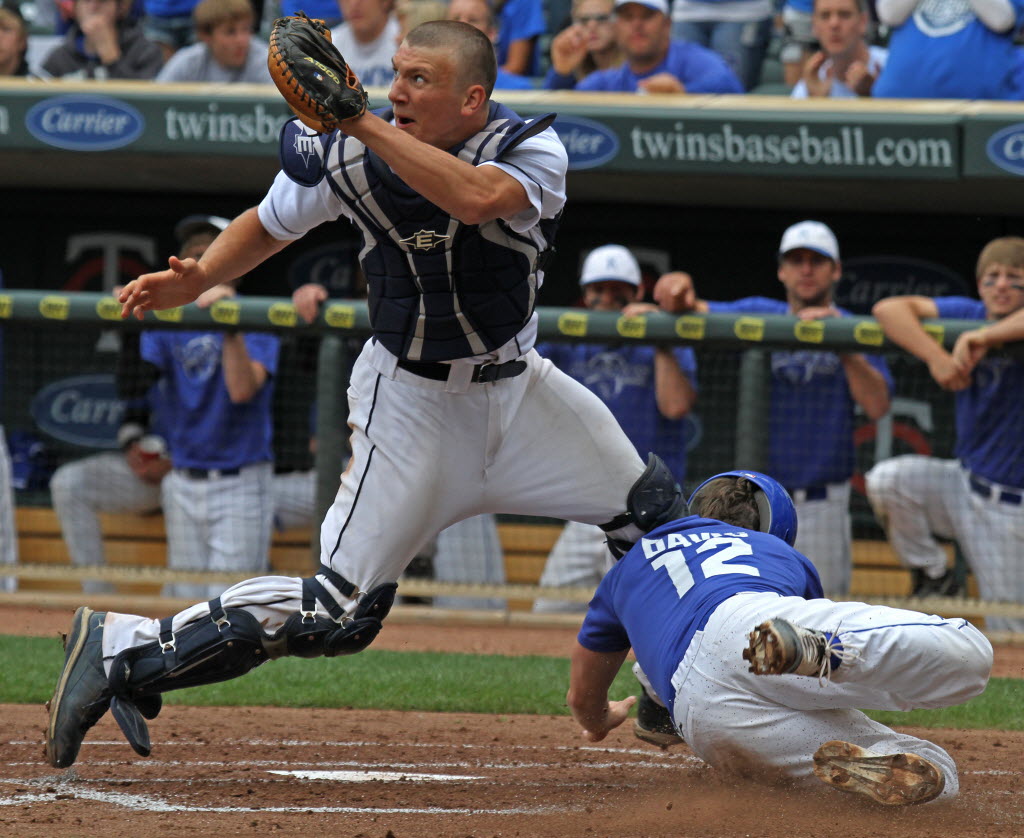 Eden Valley-Watkins catcher Brendan Ashton was taken out as Lake Crystal-Wellcome's Evan Davis hit his leg while diving at home plate during the Class 1A state championship. Davis was safe at home, scoring in the third inning. Bruce Bisping, Star Tribune

Streit drew both a fielding and throwing error on the same first-inning play, leading to a pair of unearned runs. Redemption came on a two-RBI single in the third inning that scored the Eagles’ eighth and final run in an 8-4 victory against Lake Crystal-Wellcome Memorial.

“Just being on the field I was excited the whole game — too excited, I think, at some points,” said Streit, who did not see action in last season’s title game. “As soon as I got that hit I knew I was just fine and I knew the game was over.”

Geislinger, who allowed one hit, no walks and no runs in nine innings of work in two tournament games last week, gave up five hits and issued eight walks on Wednesday. He started the seventh and final inning having thrown more than 100 pitches, leading to talk on the bench about whether he should finish the game.

“I went out and talked to Matt and he told me there was absolutely no way he wanted to come out of this game,” Eagles’ coach Mike Tomsche said.

After snaring a comeback hit, Geislinger threw to second and initiated a game-ending double play. He finished with 136 pitches to cap a two-season pitching record of 25-0. The Eagles went 50-2 over the same span.

“It was a tough-fought game for both teams, same as last year,” Geislinger said. Last season, Geislinger earned the win in relief as Eden Valley-Watkins erased a 4-1 deficit and won its first title.

Concerned to see Wednesday’s game tied 2-2 after two innings, the Eagles seniors held a brief “heart-to-heart” in the dugout, reminding the team and themselves to, as Tomsche said, “not push any panic buttons. Good things will happen if we stay after it.”

The Eagles broke the game open with six runs in the top of the third inning but Grant Warren, who added a two-RBI single, said the surge did “not completely” shift all the pressure to the Knights.

“There was a lot of game left and anything could have happened because they are a scrappy team,” Warren said.