The Ponies defeated Minnetonka 4-0 behind the masterful complete-game pitching of Drew Gilbert. 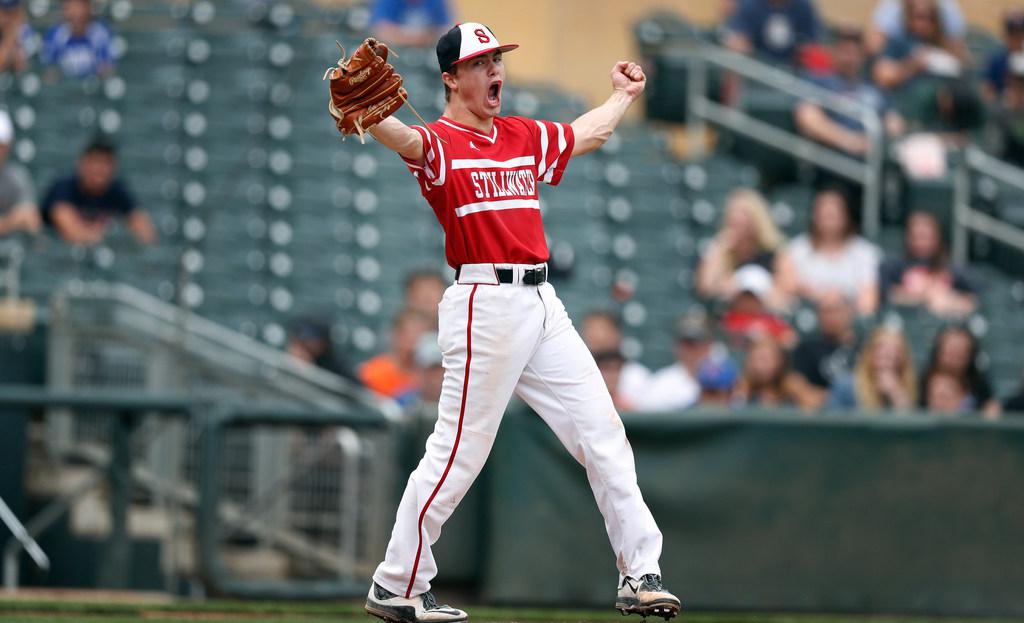 Stillwater pitcher Andrew Gilbert celebrated moments after his complete game in the Ponies' 4-0 victory over Minnetonka in the Class 4A championship game Monday at Target Field. Photo: JERRY HOLT • jerry.holt@startribune.com

Standing left field with little to do for much of the game, Stillwater senior Mason Schwerzler found himself working hard to maintain his focus.

With good reason. Ponies ace pitcher Drew Gilbert was masterful, shutting down Minnetonka on three hits while striking out 15, leading Stillwater to a 4-0 victory Monday in the Class 4A championship game at Target Field.

Gilbert was so good , his teammates had little to do.

“I was getting a little bored,” said Schwerzler, who perked up in time to spear a sinking line drive in the sixth inning, keeping Minnetonka off the scoreboard.
“It was nice to be able to help out our pitcher because he’s been carrying us.”

That Gilbert, a hard-throwing left-handed junior, started Monday was a stroke of luck for Stillwater. He pitched in Thursday’s quarterfinals and would not have been available had the championship game taken place Saturday, when originally scheduled. The postponement worked in Stillwater’s favor.

“As long as his arm was healthy, Drew was going to pitch,” Stillwater coach Mike Parker said. “He took two days off and did a lot of arm care. He said his arm felt healthy.”

Gilbert proved more than just healthy. He was dominant. He struck out the first six batters he faced and was rarely in trouble. Only one Minnetonka baserunner made it as far as third base.

“The first couple of batters, I could tell he was dealing,” Stillwater catcher Cody Venske said. “You just say to the other team ‘Good luck hitting it.’ ”

Hearing the game was postponed Saturday, Gilbert knew immediately that he would be called on to pitch Monday.

“I stayed true to my routine with my arm care and making sure my body was ready to go,” Gilbert said. “This is the state championship game. Three days’ rest didn’t matter to me. I was going to do it for everyone on this team.”

Instead of bringing back Minnetonka’s No. 1 starter, Aaron Wukmir, coach Paul Twenge elected to go with senior Mason Nadolney, who had pitched sparingly during the regular season. Nadolney matched Gilbert early on, holding Stillwater hitless through three innings.

The Ponies scored twice in the fourth, loading the bases with one out. Gilbert, who had led off the inning with a single, scored the first run on a fielder’s choice. The second run scored on an error on a pick-off play.
Those two runs were all Gilbert needed. The only drama was whether he would be able to complete the game before hitting his 115-pitch limit.

He ended up with 118 pitches – players can go over 115 to finish a batter – and ended the game the way he started, striking out the final two batters.

“Selfishly, I wanted to close this one out,” Gilbert said. “To do this with this great group of guys, it’s unreal. I can’t describe it.”

Stillwater won its second baseball state championship – the first was in 1991 – and finished the season with a 20-game winning streak.

A masterful pitching performance from Drew Gilbert lifted Stillwater to a 4-0 victory over Minnetonka in the Class 4A championship game.

Stillwater's victory Monday at Target Field was its 20th consecutive of the season.

Gilbert, a junior lefty, started for the Ponies (24-3) in the quarterfinals but was able to come back and take the mound after rain Saturday forced the championship game to Monday.

Gilbert set the tone by striking out the first six Minnetonka batters. He finished with 15 strikeouts, allowed three base hits and issued two walks.

For the first three innings, Gilbert was matched by Minnetonka starter Mason Nadolney, a a senior who had started just one game this season. Nadolney didn’t allow a hit through three innings.

Stillwater broke through in the bottom of the fourth. A single by Gilbert, Jonathan Koehn’s roller to short and Mason Schwerzler’s single loaded the bases.

Gilbert scored on a fielder’s choice and Koehn doubled the tally, coming home on an error on a pickoff play.

Stillwater added two more runs in the bottom of the sixth off Minnetonka reliever Christian Cote.

It’s the second baseball state championship for Stillwater, which won the Class 2A title in 1991.