The Irish scored seven runs in two innings, sending 15 batters to the plate, en route to an 8-4 victory over Duluth Marshall. 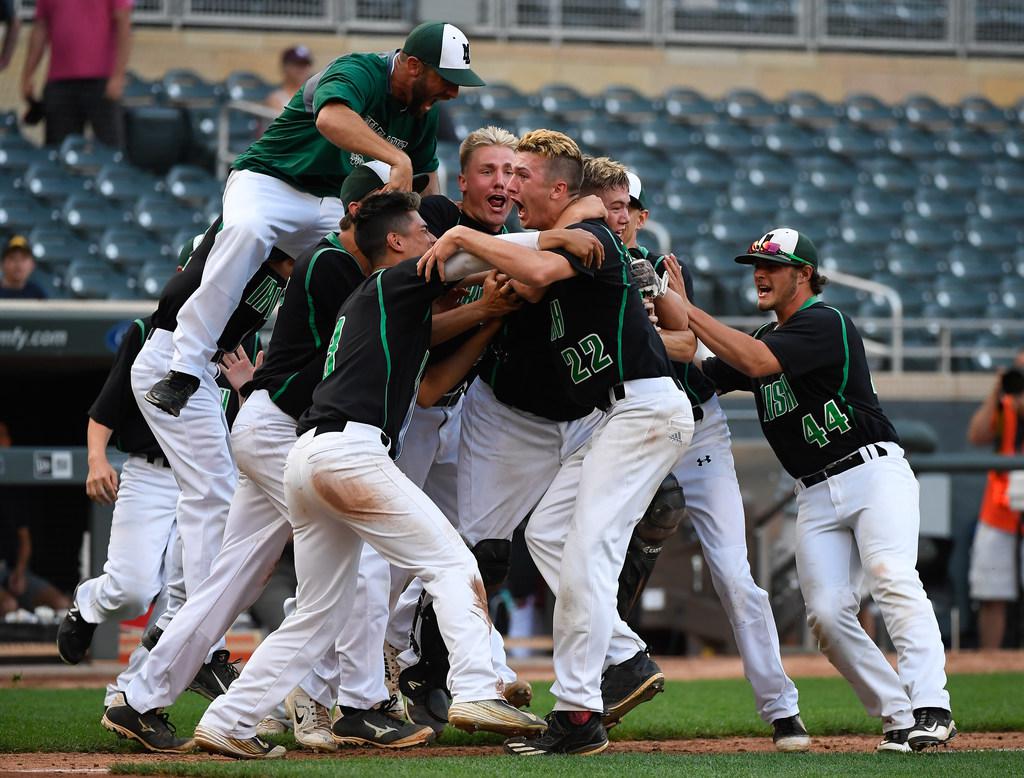 Maple Lake players celebrated after their 8-4 victory over Duluth Marshall to win the the Class 2A championship Saturday at Target Field. Photo: AARON LAVINSKY • aaron.lavinsky@startribune.com

Truthfully, the result may have been assured in two days earlier. Friday’s victory in the semifinals played a role, too.

Maple Lake’s strong early offensive showing in Thursday’s quarterfinals allowed ace Grant Mergen, who pitched only three innings, to start again Saturday. He responded with one of his strongest outings of the season, pitching a complete game and holding the Hilltoppers to four runs and eight hits while striking out five.

“If we would have had scripted this on paper, it fell exactly as we would have scripted it,” Maple Lake coach Brooks Marquardt said. “I don’t think Grant has a complete game this year. He always gets a lot of strikeouts and that adds to his pitch count.”

Conversely, Duluth Marshall (23-5) was forced to go with its No. 4 starter, Carter Sullivan, after using its top three pitchers in the first two rounds.

“The way this tournament broke, we had to use our biggest and best guys early and they were able to keep an ace in the hole,” Hilltoppers coach Joe Wicklund said.

Maple Lake (25-2) was making its third consecutive state tournament appearance. In each of the last two seasons, Mergen had started and lost in the semifinals. Getting that semifinals bugaboo out of the way did wonders for the Irish’s confidence, Mergen said.

“That was huge,” he said. “We had to get that semifinals monkey off our backs.”

While the availability of pitching was the variable, Maple Lake’s offense was its rock of consistency. The Irish knocked out 11 hits, reaching double-digits in all three state tournament games.

After the Irish fell behind 3-1 after two innings, their offense came alive the second time through the order. Senior centerfielder Dawson McAlpine, the No. 9 hitter, led off the third inning with a double. Eight batters and four hits later, Maple Lake had a 5-3 lead.

They kept the pressure in the fourth inning, sending seven men to the plate and scoring three more times to take a commanding 8-3 lead.

While the Irish were scoring, Mergen used that growing lead to find his groove. At one point, he retired eight consecutive batters until Marshall cobbled together a run on a walk, a double and sacrifice fly, cutting the lead to 8-4 after five innings. The Hilltoppers wouldn’t score again.

“I could just go out there and throw strikes,” Mergen said. “I could attack them.”

The victory helped the Irish match the achievements of the Maple Lake girls’ athletes, who won state titles in volleyball, True Team track and field, and softball this school year.

Mergen smiled. “We’ve got to get a little something,” he said.