Pitcher Seth Halvorsen became the first prep player to hit two homeruns at the stadium. He also had 16 strikeouts en route to an 8-0 shutout. 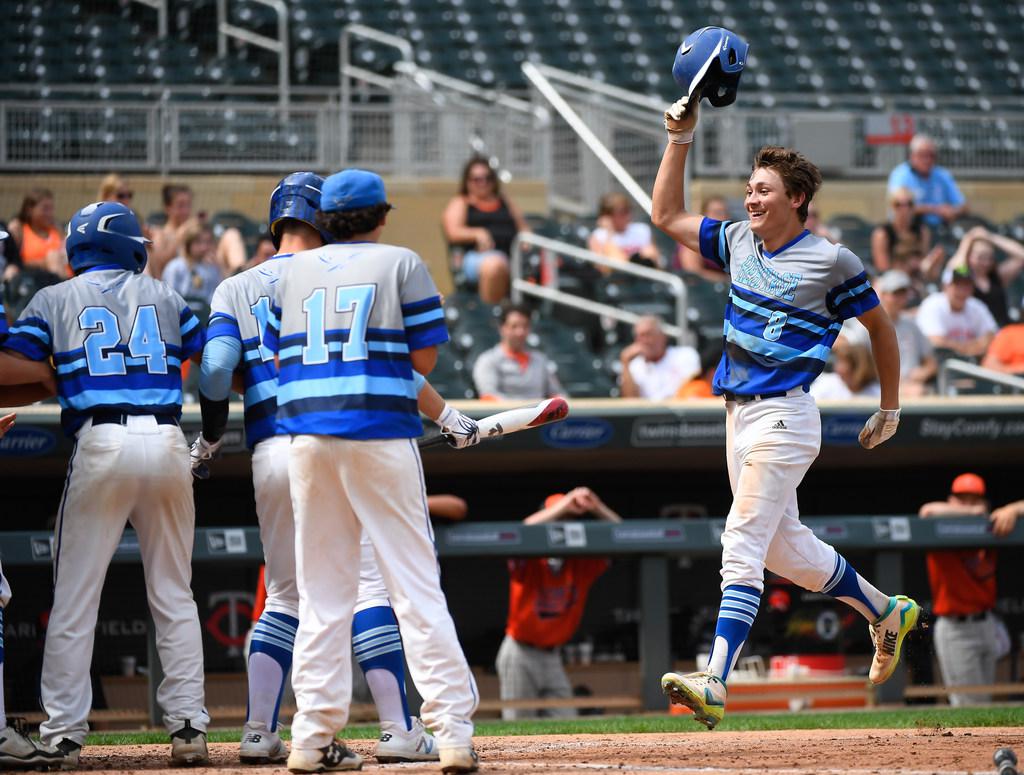 Heritage Christian pitcher Seth Halvorsen (8) hit a three-run homer in the bottom of the fifth inning, his second of the Class 1A championship game against Sleepy Eye on Saturday at Target Field. Photo: AARON LAVINSKY • aaron.lavinsky@startribune.com

The Minnesota Twins’ 30th-round draft pick became the first high school player to hit two home runs at the stadium. And he threw a five-hit shutout, leading the Eagles to their first state championship with an 8-0 victory over Sleepy Eye on Saturday in the Class 1A finals.

Halvorsen went 3-for-3 with four RBI and four runs scored.

“I think the Twins made a mistake,” Heritage Christian coach Jon Ledeboer said. “They should have offered him more money.”

Halvorsen belted a solo home run to left field on the first pitch he saw leading off the bottom of the first inning. The Missouri recruit added a three-run shot over the 377-foot sign in left-center field in the fifth. He also singled and walked, and scored both times.

“This was amazing after being drafted by the Twins,” said Halvorsen, who is bypassing signing with the Twins and heading to college. “I hope to be back here playing some day. Maybe, they can pick me again in three years.”

Halvorsen kept Sleepy Eye (18-6) off balance with a fastball in the low 90s and an excellent curve ball. He struck out 16 and walked two.

“We came here expecting to win, but not like that,” Halvorsen said.

“Seth was unbelievable,” Brodersen said. “It’s amazing when you can go out with a state championship in your last high school game.”

The game started after a 4-hour, 20-minute rain delay. In a shaky first inning, Halvorsen escaped without any damage despite yielding a single and walk while a third runner reached on an error. Sleepy Eye senior Zach Haala was thrown out at the plate trying to score after a pitch bounced out of the glove of Brodersen, who recovered in time and threw to Halvorsen to easily get Haala.

“I think there was a little nervousness, and he was ramped up,” Ledeboer said about his ace. “If you don’t get to him early, good luck the rest of the game.”

Halvorsen didn’t waste any time putting Heritage Christian (23-3) on the scoreboard with his solo blast in the bottom of the first.

“Hitting a home run on the first pitch was impressive,” Brodersen said. “It set the tone for the whole game.”

Brodersen made it 3-0 with a two-run double in the second inning. His double followed a walk to the No. 9 hitter with two outs and a Halvorsen single. Brodersen also doubled in the fourth run when the left fielder lost his fly ball in the sun in the fourth inning.

Halvorsen wrapped up the scoring with his three-run shot.

“This has been a long time coming,” said Ledeboer of the Eagles’ championship on their first trip to state after six consecutive appearances in the section finals. “It feels really good.”