3A: Rocori reaches title game with shut out against New Ulm

Spartans pitcher Brandon Gill gave up five hits in a 5-0 victory that was aided by an error-plagued inning by the Eagles. 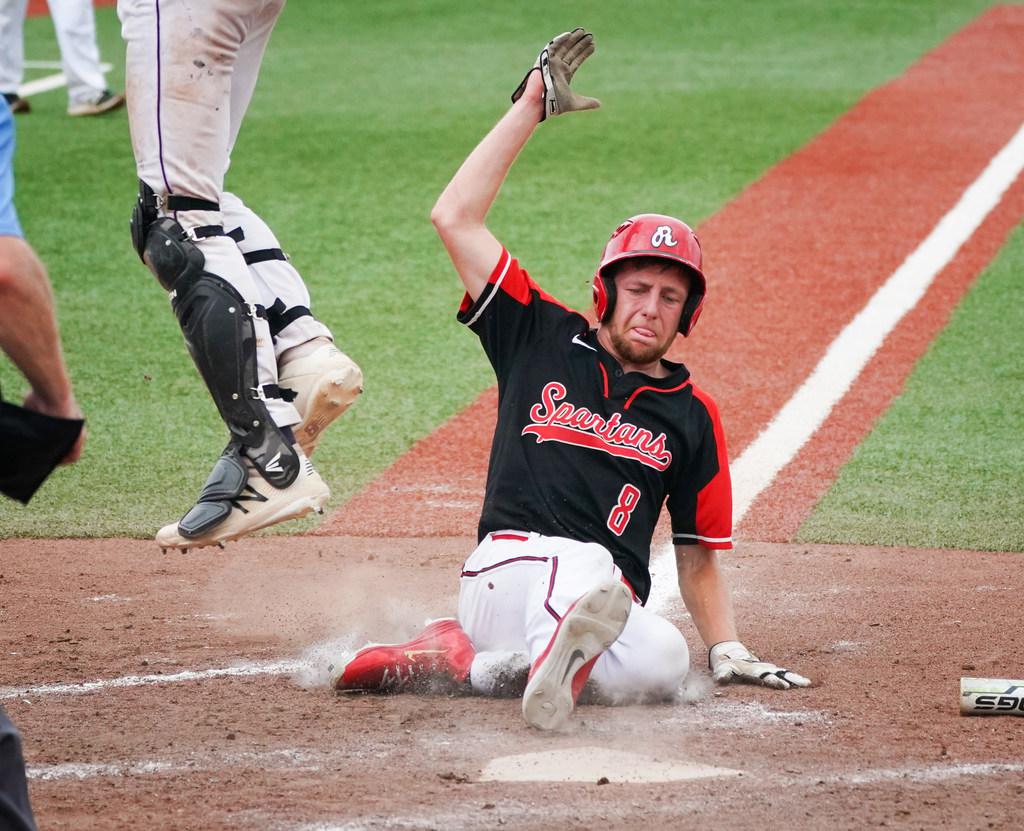 Rocori pitcher Brandon Gill ecstatically bounced off the mound, high-fiving Tylor Schroeder. The third baseman made a diving stop to his left to start an inning-ending double play.

Schroeder was reciprocating a few innings later after Gill threw a five-hit shutout, leading the Spartans to a 5-0 victory over New Ulm in the Class 3A semifinals Friday at Siebert Field.

“Our defense was huge,” said Gill, who struck out five and walked three. “They made every play behind me.”

Gill settled in after a 59-minute rain delay that followed a shaky top of the first inning. He yielded a walk and single before inducing an inning-ending line drive double play to second base.

“I was shaking and hot. I felt terrible,” Gill said. “After the rain delay, I zoned in and found my velocity.”

Rocori (22-5) scored the only run Gill needed in the bottom of the second inning on junior Matt Koshiol’s two-out, infield single to shortstop.

The Spartans took advantage of four errors by New Ulm in the next inning to score two more runs. Schroeder, a senior, drove in the first run with a single to right field. Pinch runner junior Ben Nelson scored all the way from first base on the play when the outfielder misplayed the ball. It was the only hit in the frame.

Rocori added another run in fourth when sophomore Jack Steil, who opened the inning with a double, scored on junior Brady Klehr’s infield single to third with two outs.

New Ulm (21-4) made its fifth error an inning later when the Spartans extended their lead to 5-0 on a fielder’s choice. Schroeder had his second hit, a double, in the inning.

“Words can’t describe how I feel,” Gill said. “We’ve worked hard all year to get to this point, and here we are.”

Rocori will face Mahtomedi for the state championship at 4 p.m. Saturday at Target Field.