The Ponies got all their runs in the last two innings to reach the Class 4A championship game and extended their winning streak to 19 games. 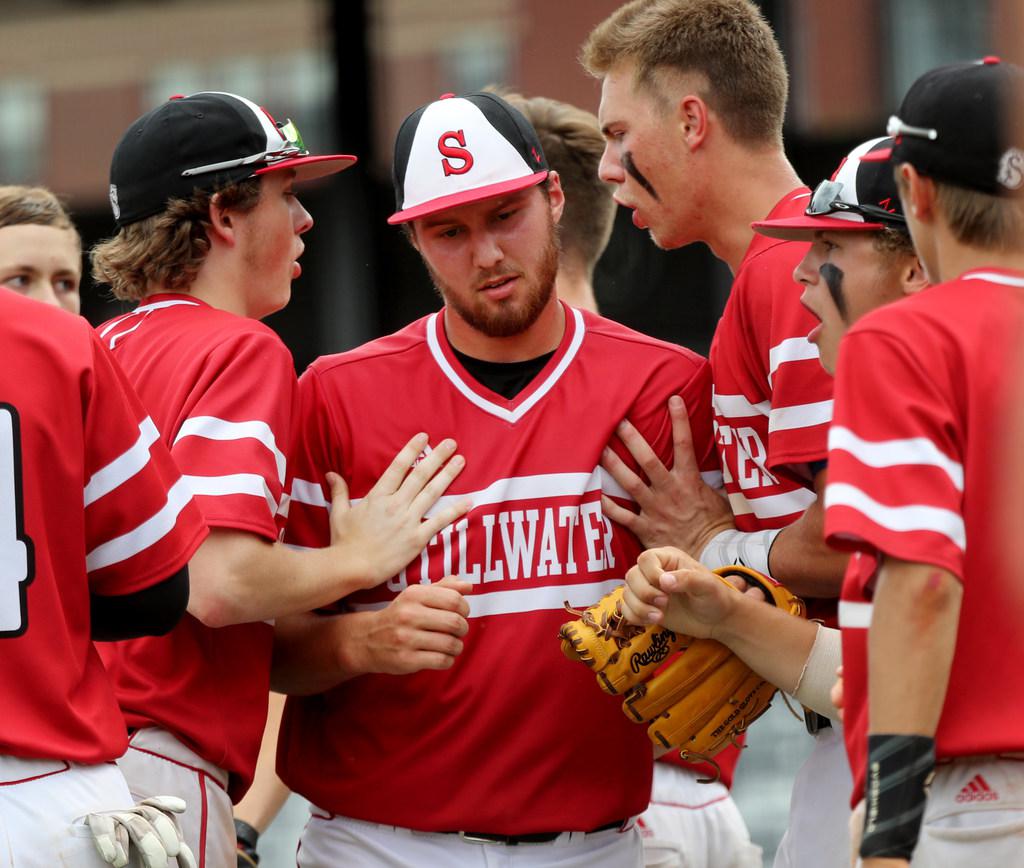 Stillwater's Cody Venske (center) came on in relief in the sixth inning and picked up the victory in Stillwater's 4-3 win over Blaine. Photo: DAVID JOLES • david.joles@startribune.com

One day after using his arm to pitch Stillwater to a victory, Drew Gilbert used his glove and his bat to help the Ponies to another one in a 4-3 defeat of Blaine in the Class 4A semifinals Friday at CHS Field.

Gilbert, a fleet junior, robbed Blaine of extra-base hits three times – two of them on consecutive plays – and went 2-for-3 with an RBI and run scored.

“Just trying to make any play I can for the team,” Gilbert said.

Stillwater starter Will Frisch, a rocket-armed junior pitcher, struggled and left the game after 4⅔ innings, nine walks and a shade more than the 115-pitch limit allowed. Blaine led 2-0 at that point and momentum was hanging around the Bengals’ dugout.

But Cody Venske, who had come on in relief of Frisch, led off the top of the sixth with a double. Two batters later, Gilbert tripled him home. Frisch hit a sacrifice fly on the next at-bat and suddenly, the game was tied.

In the bottom of the inning, Gilbert flashed his glove work, chasing down a long fly and making an over-the-shoulder catch, followed by a diving catch on the next play.

“Nobody else makes those plays,” said Stillwater’s Cody Venske, who picked up the victory pitching 2⅓ innings of relief.

Stillwater (23-3) scored two runs in the top of the seventh on two hits, two Blaine errors, a wild pitch and some heads-up baserunning to take their first lead.

Blaine (22-4) got a run back in the bottom of the seventh, but Venske got a called third strike with the bases loaded to end the game.

Blaine played the waiting game, but Stillwater got the last laugh Friday at CHS Field.

Stillwater fireballer Will Frisch was largely ineffective, leaving after 4 2/3 innings after walking nine batters and reaching his single-game pitch limit, which is 115. Blaine, which hoped to wait out Frisch and his 90-plus mph fastball, scratched out two runs and led 2-0 when Frisch departed.

But Stillwater leaned on its offense and tied the game in the sixth on a double by Cody Vanske, a triple by Drew Gilbert and a sacrifice fly by Frisch. They tacked on two more with some creative bunting and base-running in the top of the seventh.

Blaine rallied and scored a run in the bottom of the seventh, but left the bases loaded.