Never-say-die Minnetonka claws, walks its way into 4A championship

The Skippers, down 5-0 early against St. Michael-Albertville, scored twice in the bottom of the seventh for a 7-6 victory, the final run scoring on a bases-loaded walk. 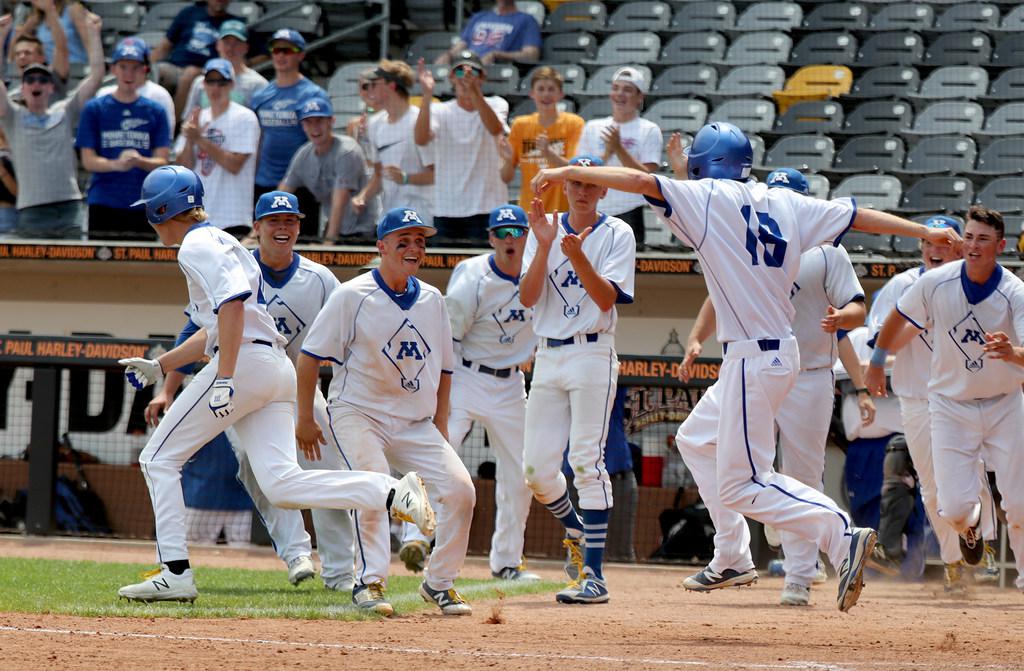 Of myriad ways to win a baseball game, Minnetonka’s 7-6 walk-off victory over St. Michael-Albertville was one of the least likely.

The Skippers fell behind 5-0 in the second inning Friday at CHS Field, then spent the rest of the game piecing together pitching, defense and offense. They finally rallied for two runs in the bottom of the seventh inning in improbable fashion.

In between there were home runs, unearned runs, bunts and bloops, five errors by St. Michael-Albertville and five pitchers for Minnetonka. The game-winning runs came courtesy of a push-bunt by Cameron Smrekar, who nudged the ball into an undefended gap in the infield to score Nick Thimsen.

“We work on that in practice every day,” said Smrekar of his unusual bunt. “It’s actually the third time we’ve used it this year.” 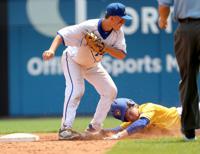 Three batters later, Andy Andresen, one of the heroes of Thursday’s victory over Eastview, took a bases-loaded walk to force in the winning run.

Strange ending, but they weren’t even Minnetonka’s most unusual runs. Those came in the fourth, when Thimsen struck out on a pitch in dirt with two on and two outs. He raced to first and the throw sailed into right field. Two runs scored on what should have been the last out of the inning.

“That’s how we’ve played all year,” said junior Mitch Klass, whose home run in the bottom the second, gave the Skippers a jump-start. “We know our team can battle back. We all have that chemistry and we all play together.”

The Skippers players may not have doubted, but head coach Paul Twenge had his concerns.

“Oh gosh, yes, there was doubt,” Twenge said. “I just told them you’ve got to play every inning, one at a time. We have a quote – it’s not my quote – ‘Seven one-inning games.’ We’ve been doing that all year long.”

Minnetonka spotted St. Michael-Albertville a five-run lead, battled back to tie, fell behind again, then pushed across two runs in the bottom of the seventh inning to advance to the Class 4A championship game Saturday with a 7-6 victory.

Nick Thimsen led off the bottom of the seventh with a single and went to third on a sacrifice bunt that was compounded by the Knights' fifth error of the game. He scored on a perfectly placed bunt by Cameron Smreker.

Andy Andresen, one of the heroes of Minnetonka’s come-from-behind victory in Thursday’s quarterfinals, walked with the bases loaded to force in the game-winning run.

The Skippers (22-4) used five pitchers in the game at CHS Field.

Check back later for more.