2A; Jordan strikes first and last to defeat No. 3 seed Paynesville

The Hubmen scored four times in the fifth inning en route to a 6-2 victory. 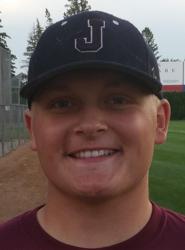 Michael Lambrecht nailed the scoreboard with his second-inning home run to get Jordan started in a 6-2 victory over third-seeded Paynesville on Thursday in the Class 2A quarterfinals.

After a lightning delay at Dick Putz Field in St. Cloud, Paynesville (19-5) tied the score twice, once on senior catcher’s Zach Osendorf homer in fourth.

“Just sit back and square it up, I guess,” Osendorf said about his home run.

Jordan (15-8) went ahead to stay in the fifth inning by loading the bases and scoring four runs. That included sophomore pinch-runner Taylor Stroh beating a tag at home.

“It was a good hit by [Christian] Medick, and I just came around,” Stroh said. “I saw the tag was going to be there, so dove kind of to the left [and] just got my hand in there.”