The Knights' Will Anderson and the Panthers' Nathaniel Peterson each threw complete games. 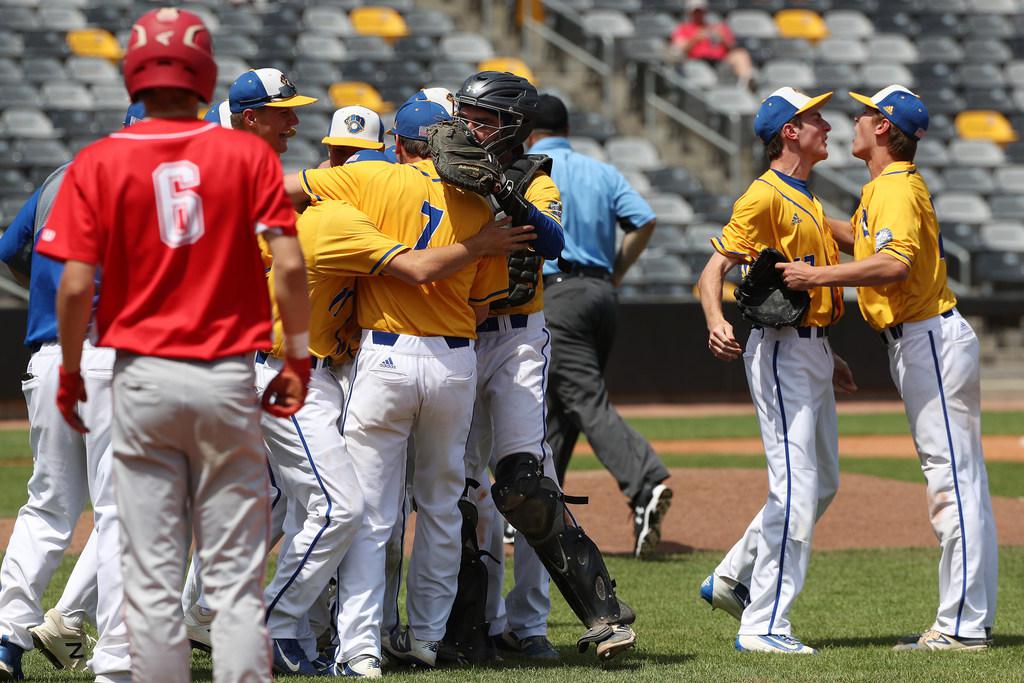 St. Michael-Albertville players and coaches celebrated after an interference call at second base ended the game, giving them the victory over Lakeville North. Photo: ANTHONY SOUFFLE • anthony.souffle@startribune.com

St. Michael-Albertville junior pitcher Will Anderson had bumpy innings before. So when he gave up two runs to Lakeville North in the top of the first inning Thursday at CHS Field, he wasn’t about to panic.

He didn’t, shaking off the tough start and holding the Panthers scoreless over the final six innings to give the Knights a 3-2 victory in the Class 4A quarterfinals.

“I’ve had a lot of rough innings this year,” Anderson said. “Moorhead and Maple Grove both put up five-spots on me. This time, I just wanted to come back and battle.”

Anderson held the Panthers down by flip-flopping his normal approach.

“I threw a lot less first-pitch fastballs and used a lot of off-speed to get ahead,” he said. “Then I finished with fastballs, which I normally don’t do.”

After falling behind early, St. Michael-Albertville came to score two runs in the bottom of the first off of Lakeville North starter Nathaniel Peterson.

Both pitchers settled in after that, with Peterson at one point retiring 12 consecutive batters.

Anderson was nearly as good, scattering hits over the final six innings. “That was the best game I’ve ever thrown,” he said.

St. Michael-Albertville (22-4) scratched out the game-winning run in the bottom of the sixth. Sophomore star catcher Cody Kelly led off with a walk, then went all the way to third on a sacrifice bunt when he realized no one was covering third base. When the Lakeville North first baseman overthrew third, Kelly came home to score.

Lakeville North (16-8) nearly tied the game in the top of the seventh when St. Michael-Albertville failed to turn a double play with runners on first and third. The umpire at second base ruled base-runner interference and called both runners out, ending the game.

“He’s such a competitor, you knew he was going to come back strong,” Schumm said Anderson’s effort. “You might get one inning where you get to him, but not more than one.”

St. Michael-Albertville slipped past Lakeville North 3-2 in a pitchers' duel between the Knights' Will Anderson and Lakeville North’s Nathaniel Peterson.

Both pitchers gave up two runs in the first, then settled down and pitched complete games.

The Knights took a 3-2 lead in the bottom of the sixth without the benefit of a base hit. Cody Kelly led off with a walk and went all the way to third on a sacrifice bunt when he realized no one was covering the base. The throw to third sailed into foul territory, allowing Kelly to score with the go-ahead run.

Lakeville North thought it had tied the game in the top of the seventh when Gavin Baker crossed the plate on a ground ball to short. But umpires ruled the Lakeville North baserunner had interferred with a potential double play, giving the game to the Knights.