A five-run third inning and Ben Pedersen's pitching led the Hilltoppers to a 6-2 victory. 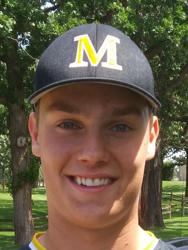 Pedersen, a Missouri recruit who allowed two runs all season, held St. Cloud Cathedral (17-9) in check as the top-seeded Hilltoppers (22-4) advanced with a 6-2 victory. He struck out nine and allowed three hits on a blustery morning at Dick Putz Field in St. Cloud.

“I saw that on one of their hits,” Pedersen said about the wind blowing toward the outfield. “They had one guy that hit the ball very deep. That was a nice little warning to keep the ball down that I saw early.”

Duluth Marshall jumped ahead early with five runs in the second inning. Junior designated hitter Alex Busick started the run-scoring with an RBI double to the deep left field corner.

"The wind was just carrying everything,” Busick said.

St. Cloud Cathedral responded with a run on a wild pitch and a RBI double by Crusaders second baseman Reggie Deyak with no outs. Pedersen stopped the rally with double play, making a catch and doubling up a runner at first.

“Ben’s MO has really been to be at his best even when his back’s against the wall,” Hilltoppers coach Joe Wicklund said.

St. Cloud Cathedral’s runs came on a wild pitch and an RBI double.