Two-run rally in bottom of seventh lifts Minnetonka past Eastview

Nick Thimsen's single to right scored Jack Hanson with the game-winner for a 3-2 victory over the Lightning. 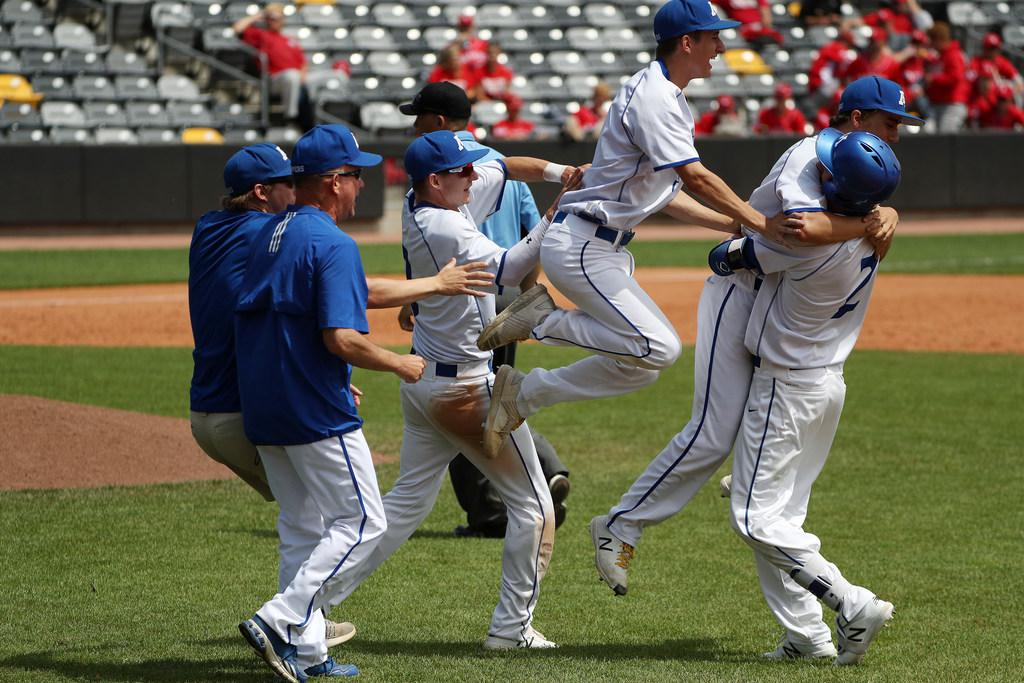 Minnetonka outfielder Nick Thimsen (2) was mobbed by teammates after getting a base hit that scored the winning run in the bottom of the seventh inning. Photo: ANTHONY SOUFFLE • anthony.souffle@startribune.com

The value of patience was not lost on Minnetonka as the Skippers outlasted Eastview ace Tommy Springer to pull out a 3-2 walk-off victory Thursday in the first Class 4A quarterfinal at CHS Field.

Nick Thimsen lined a one-out single to right to score Jack Hanson from second base, capping a two-run Minnetonka rally in the bottom of the seventh inning.

The Skippers had tied the game earlier in the inning when Andy Andresen led off with a hit to center that skipped under the centerfielder’s glove, allowing Andresen to advance to third. After Hanson walked, Jake Zaetta laid down a perfect bunt to the left side that allowed Andresen to score.

“That was a beautiful bunt,” Andresen said. “Perfect. No play at the plate. Beautiful.”

For the first three innings, Springer was almost untouchable. Of the first 10 batters Minnetonka sent to the plate, six struck out and only one managed to put the ball in play.

Springer contributed at the plate as well, lacing a one-out double down the line in the top of the first inning and later scoring on a single by Logan Tollefson to give the Lightning a quick 1-0 lead.

Minnetonka (21-4) finally solved Springer in the bottom of the fourth. Jarod Wandersee got Skippers’ first hit of the game, a double to left, and Andresen drove him in with a single, tying the game 1-1.

“Springer was dealing really well, but we got to him a little bit later when we got used to his velocity,” Andresen said.

Eastview (15-10) responded in its next at-bat. Catcher Ross Cochran singled in pinch-runner Kyle Nelson to retake a 2-1 lead.

Minnetonka had a chance to tie the game in the bottom of the sixth, but an attempted steal of home failed with two outs, setting up the final inning heroics.

“This is a team that just keeps playing, keeps playing,” Minnetonka coach Paul Twenge said. “If you open the door a little bit, sometimes they knock it open.”

Nick Thimsen singled to right to score Jack Hanson from second with the game-winning run to give Minnetonka a 3-2, come-from-behind, walk-off victory over Eastview in the first Class 4A quarterfinal at CHS Field.

Minnetonka tied the game 2-2 earlier in the inning thanks to a leadoff single by Andy Andresen, who ended up on third base when the ball skipped under the centerfielder’s glove. Andresen, who drove in Minnetonka’s first run, scored two batters later on a perfect squeeze bunt by shortstop Jake Zaetta.

Eastview starter Tommy Springer pitched a complete game and took the loss, striking out eight and walking six in 6 1/3 innings of work.

Christian Cote pitched one inning in relief of Minnetonka starter Aaron Wukmir and earned the victory.