Despite starting in a 1-0 rut, the Redhawks piled on the runs and are going to their fourth consecutive tourney. 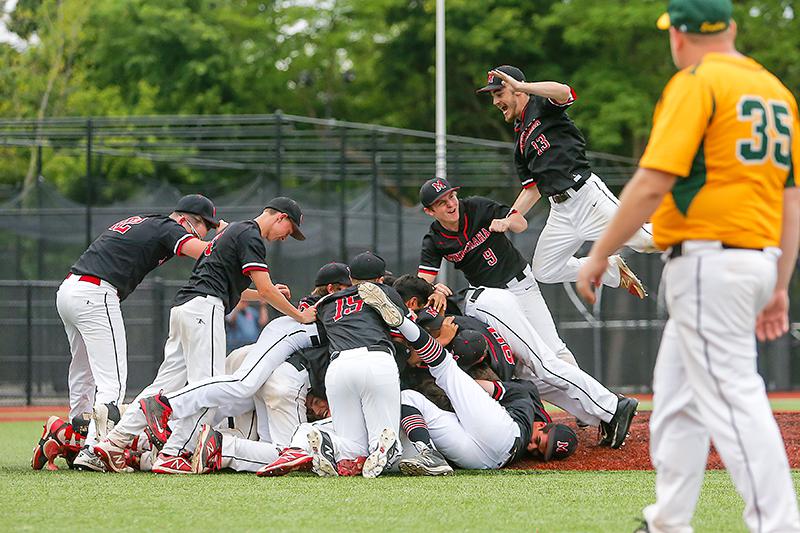 Outfielder Conor Johnson (13) leaps into the celebratory pile after Minnehaha Academy wrapped up its 9-1 victory over New Life Academy in the Class 2A, Section 4 championship and earned its fourth consecutive state tournament berth. Photo by Mark Hvidsten 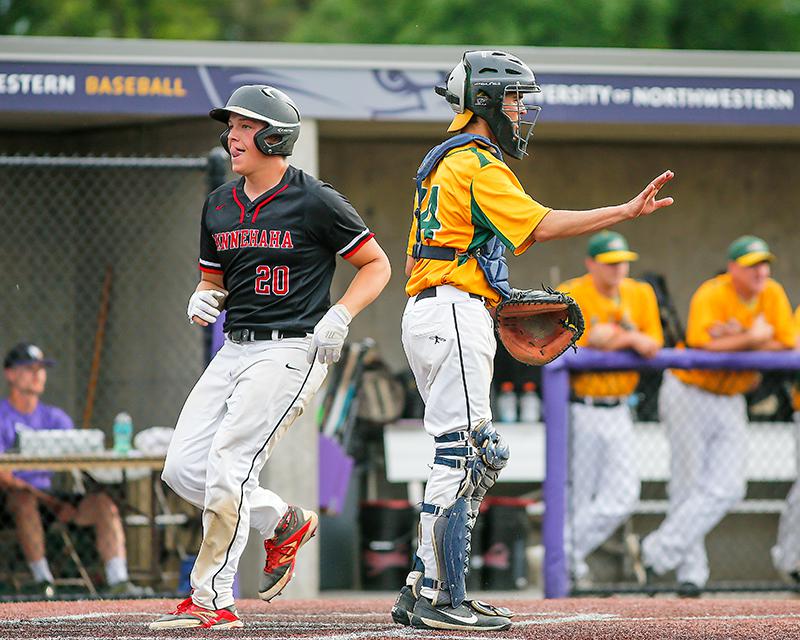 To say that Minnehaha Academy baseball coach Scott Glenn has great confidence in the skills and determination of junior pitcher Bennett Theisen is an understatement. But even Glenn’s confidence wavered as he sent a relief pitcher to the bullpen with the bases loaded and just one out in the top of the first inning of Thursday’s Class 2A, Section 4 championship game against New Life Academy.

He needn't have bothered. Theisen struck out Peter Bouillon and Cooper Amon, the Eagles’ No. 6 and 7 hitters, to escape a 40-pitch inning by giving up just one run. Theisen, batting third, then singled in the bottom of the inning, helping the Redhawks score two runs, which sparked a 9-1 victory sending Minnehaha Academy to its fourth consecutive state tournament.

“I felt very, very fortunate that we got out of there giving up only one run,” said Glenn, whose team has played in the last three Class 2A state championship games, winning the last two. “But (Theisen’s) a competitor. I knew he’d come back and give us a good performance.”

Theisen, who pitched in front of a scout from North Dakota State on Thursday and has interest from several other Division I schools, said the inauspicious start was the result of his excitement for the game.

New Life Academy coach Dave Darr, whose team won the Class 1A state tournament in 2015 but has now lost to Minnehaha Academy in the last three Section 4 championship games, was happy to get on the board right away but said his team let an opportunity escape.

“I was also disappointed that with a 3-1 count on our No. 6 hitter, who has been hitting very well during the section tournament, we didn’t get it done,” Darr said. “Yeah, we had one run and that was nice, but we needed to put up a crooked number. … I think that would have altered the outcome some.”

The failure to score more certainly didn’t help. It was just the fourth run in five games the Redhawks have allowed during the section tournament. Minnehaha Academy (19-2) heads to the state tournament having outscored their opponents 64-4 in five postseason games.

First baseman Roddy MacDonald wielded the biggest bat for the Redhawks on Thursday. The junior drove in four runs with two singles and a pair of walks and is one of the many lesser-experienced Redhawks players. Noah Dehne, who walked and scored twice; Brock Brumley, who walked and singled in a run in the Redhawks’ five-run sixth; and Theisen are the only returning starters from last season and the only players with two state championships to their credit.

“He’s come through this year,” Theisen said of MacDonald, who hit .175 during the regular season but has been swinging the bat much better during the playoffs. “He struggled for a while, but he’s gotten his confidence in the section tournament and he came through in the clutch today.”

But no one was more clutch than Theisen, who was down to two pitches left on his three-day allotment when he picked off an Eagles (16-6) runner at first to end the game. He walked just one batter after the first inning, struck out nine and allowed just three hits.

“I’m really happy that we have the opportunity to go back to state,” said Glenn. “Despite losing seven starters from last year’s state team, that was our goal from the start. Now we can start over and refocus on figuring out a way to make (a third consecutive state championship) happen.”

For the Eagles and coach Darr, it’s back to the drawing board in an attempt to figure out a way to get past Minnehaha Academy. “The next hurdle, besides getting back to the state tournament, is these guys,” he said motioning to the Redhawks dugout.

Two years ago, the Redhawks came up through the loser’s bracket and had to beat New Life Academy twice on the final day to reach the state tournament. Last year, the roles were reversed and the Redhawks won 3-1.

Coming through the loser’s bracket and having played more games was too much of an obstacle for the Eagles, who were without their No. 3 pitcher (shortstop Noah Rodriguez is battling through back problems) and trying to squeeze everything they could out of their top starters in Cooper Faltisek and Bouillon.

Faltisek, pitching on three days’ rest, threw 35 pitches in the first and then battled into the fifth inning when Jake McCabe doubled and MacDonald singled to drive in runs to give the Redhawks a 6-1 lead. He finished with five strikeouts and six walks in five innings.

“They just ran out of gas,” Darr said. 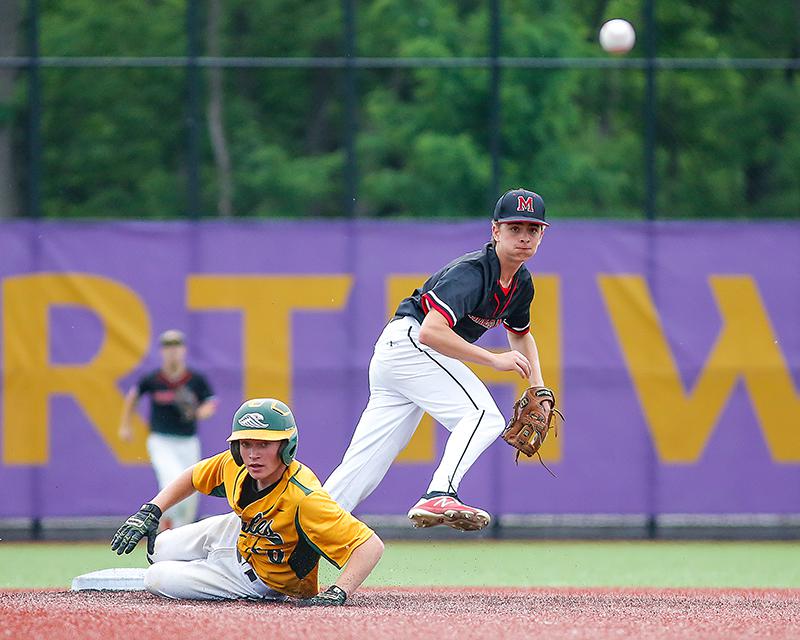 New Life Academy baserunner Mark Morrison looks back toward first base after being forced out at second by Dylan Kiratli. Photo by Mark Hvidsten, SportsEngine

Junior Bennett Theisen survived a 40-pitch first inning and guided Minnehaha Academy to a 9-1 victory over New Life Academy in the Class 2A, Section 4 championship game and into the state tournament for the fourth consecutive year.

Theisen walked three batters and threw two balls past catcher Nick Wong, allowing New Life Academy to take a 1-0 lead in the first inning. He struck out No. 6 hitter Peter Bouillon and Cooper Amon to end the inning and minimize the damage.

The Redhawks, two-time defending Class AA state champions, had rolled through the Section 2 tournament, winning five games by a combined score of 55-3. Facing a 1-0 deficit, they got their bats going again.

Minnehaha Academy responded with a Theisen single, Wong drove in a run with a fielder's choice ground ball and Roddy MacDonald walked with the bases loaded to give the Redhawks a 2-1 lead they never relinquished.

MacDonald, a first-year starter with the Redhawks, walked twice, singled twice and drove in four runs. Besides pitching a nine-strikeout complete game, Theisen singled, doubled, walked twice, scored twice and drove in a run. Theisen walked four and surrendered three hits. He had just two pitches left on his count when he picked off an Eagles baserunner at first to end the game.

Colin Quirk walked in the first, advanced to second on Riley Grohn's single and scored on a couple of passed balls for New Life, which was playing in its fifth consecutive section championship game -- the third against Minnehaha Academy after  winning the 2015 Class 1A state championship.

The Redhawks take a 19-2 record into the state tournament. The Eagles close the season at 16-6.