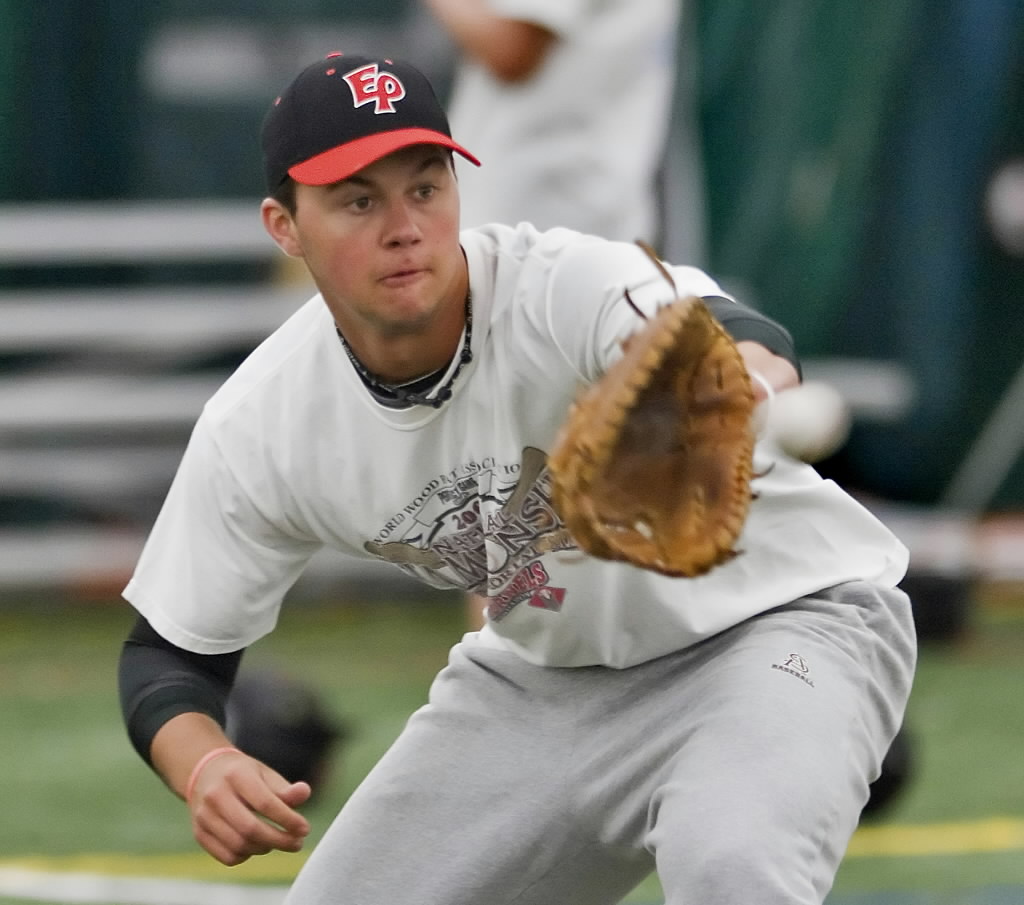 Madison Boer, taking a throw at first base for Eden Prairie in 2008. Star Tribune file photo

Madison Boer has imagined what it would be like to pitch for his hometown team, and to throw to a fellow Minnesotan behind the plate.

"I can guarantee I would be nodding my head a lot," Boer said of Joe Mauer. "I wouldn't shake him off."

righthander, who has pitched for the Oregon Ducks the past three seasons, was chosen with the Twins' second-round pick in baseball's draft Tuesday, the 87th player taken overall.

"We love his body," Twins scouting director Deron Johnson said. "We had a guy at his last game a couple of week ago, and he ran it up to 96 [miles per hour] in a relief role. ... He feels comfortable out of the bullpen, but he's got the pitches to start."

Starting pitching was the Twins' emphasis on Day 2 of the draft, as they took 21 pitchers with their 29 picks, 13 of them with collegiate experience and two from junior colleges. "We thought that was an organizational need," Johnson said. "We went with some pretty big-bodied pitchers. We got some velocity, some guys with a chance to start."

Among them are Vanderbilt lefty Corey Williams, who went in the third round, and righthander Matt Summers of Cal-Irvine, the Big West's Pitcher of the Year. And eight-round pick Jason Wheeler, a lefthander from Loyola Marymount, was the Northwoods League's top pitcher last summer with St. Cloud.

Even their most notable name among the position players – Dereck Rodriguez, son of 14-time all-star catcher Ivan Rodriguez – has thrown off a mound this year, serving as closer for his high school team.

But Rodriguez, a center fielder from Monsignor Edward Pace in suburban Miami, will stick to the outfield with the Twins, Johnson said.

"He really came on late," Johnson said of the 19-year-old prospect. "He's got a totally different body than his dad – he's a lean kid. But he's got really good tools – raw power and he's a solid runner."

His father, now with the Nationals, had been told in advance that the Twins planned to draft him, but he didn't tell his son so he could enjoy the moment. "It was cool. It was nice," Rodriguez said before the Nationals' game in San Francisco. "It's been a dream for him ever since I put a glove on his hand. ... Hopefully, he can be in Fort Myers soon. It's time to play ball."

Dreams were answered for a total of nine Minnesotans on Tuesday, including two selected by the Twins: Centennial High pitcher Austin Malinowski, taken in the 16th round, and Gophers shortstop and Minnetonka native AJ Petterson in the 25th.

Boer, 21, was having breakfast in Eugene, Ore., when his parents, following the draft via Internet in an adjacent room, began shouting. "I had a mouthful of pancakes, and all of a sudden, they started freaking out," said Boer, a Star Tribune All-Metro player in 2008. "It was exciting – a chance to come home, kind of. Hopefully someday I can play in front of my parents, and then go home and eat dinner with them."

Could happen sooner than anyone thinks, said Eden Prairie coach Mike Halloran. "He's got the perfect mechanics. And he's continued to develop at Oregon," Halloran said.

Boer has developed a sinking fastball and a hard slider, and is tinkering with a changeup and a curve. He went 3-6 for the Ducks this year with a 2.27 ERA and three saves. He was named Pac-10 player of the week after taking a no-hitter into the seventh inning against Hawaii in February.

Boer is only a junior, but both sides consider it likely that he will sign with the Twins. What does the Minnesota kid plan to do with bonus money? "I might splurge on a car," he said, "and I've got a dog in Minnesota that I might spoil a little bit."

Jordan Smith, a three-sport athlete and 2009 graduate of Willmar Senior High School, was selected Tuesday in the ninth round of the Major League Baseball's first-year player draft.

Smith was the 278th overall pick and will be joining the Cleveland Indians system.

Mike Strong, the 2007 Stillwater Area High School graduate, will be working and playing outdoors as a pitcher in the minor leagues after the Milwaukee Brewers selected him in the 10th round of the Major League Baseball Draft on Tuesday afternoon.

He was the 311th player chosen.

This marks the third time Strong has been drafted, but unlike previous years the option of returning to college baseball does not exist.

St. Olaf junior Ben Hughes was taken in the 10th round by the Colorado Rockies on Tuesday, becoming the highest pick in school history and the third St. Olaf player since 2003 to be taken.

The Houston Astros made junior outfielder Justin Gominsky the first University of Minnesota draftee in the 2011 Draft, selecting the Mahtomedi native in the 11th round.

After missing the majority of the 2010 season with a knee injury, Gominksy rebounded nicely in 2011. He started 49 games and finished with a .307 batting average, which was second on the team.

On the second day of the 2011 Draft, the Florida Marlins drafted Georgia Tech shortstop Jacob Esch in the 11th round.

Esch was a productive hitter (.319, .490 slugging percentage) and a team captain as a junior. The strange fact is the Marlins want Esch to pitch, despite the fact he only threw five innings all season for Tech.

Centennial senior Austin Malinowski was taken by the Minnesota Twins as the 508th overall pick.

Malinowski, a left-handed pitcher, compiled a 6-2 record for Centennial this season with an ERA of 0.56, including three shutouts. He batted .350 in 40 plate appearances.

Centennial was eliminated in the first round of the 2011 section playoffs.

The Cincinnati Reds selected University of Minnesota junior first baseman Nick O’Shea in the 24th round.

O’Shea said Tuesday that he will likely not hear any official offer for several days but said that he will consider signing, depending on the negotiating process.

University of Minnesota short stop AJ Pettersen was the 778th pick in the 2011 Draft, after the Minnesota Twins made him their 25th round selection.

Minnesota stocked up on college middle infielders and pitchers in this year’s draft breaking form to an extent.