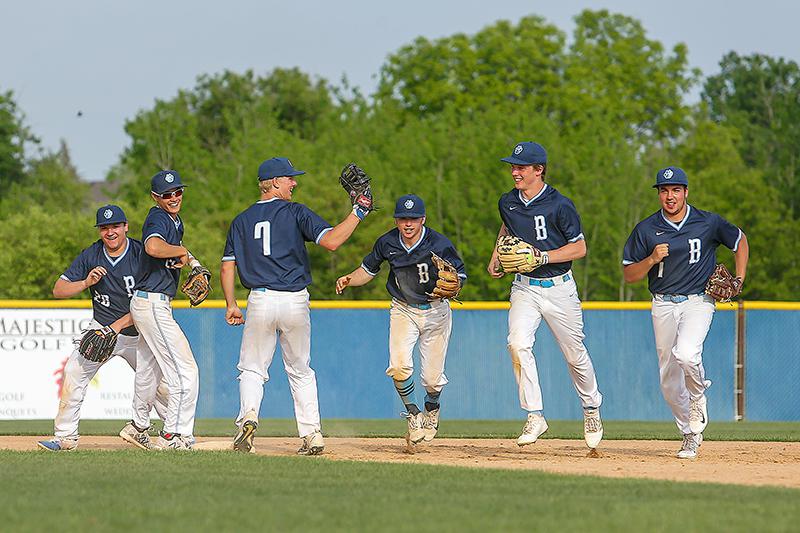 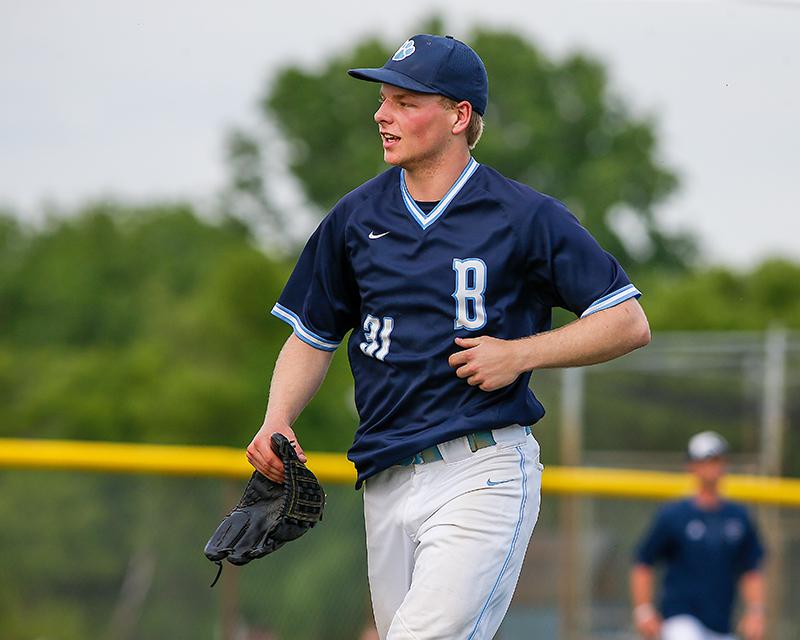 Blaine pitcher Logan McDonald comes off the mound after getting Champlin Park's Brady Higgins to ground out to end the game. McDonald allowed just one hit. Photo by Mark Hvidsten, SportsEngine

"That's what you play for in this game," said McDonald, who pitched his best when it mattered the most in the Bengals' 5-0 victory at Champlin Park on Wednesday afternoon — a win that secured Blaine's second consecutive Northwest Suburban Conference championship. "You just have to be yourself in those situations and hope for the best."

His best is what the Bengals got. After battling Champlin Park starter Max Loven through five innings, McDonald surrendered a hit for the first time, a double by Noah Christianson leading off the sixth inning. Christianson advanced to third on a passed ball with nobody out and put Blaine's precarious 1-0 lead in danger.

"You've just got to trust your [defense] and make your pitches," said McDonald, who had surrendered a number of long fly balls while striking out only two before the inning. McDonald then struck out two of the next three batters to preserve the 1-0 lead going into the final inning.

"Logan's a big-game kind of pitcher," Blaine coach Eric Feigum said. "I'll take him in that spot every day."

After striking out pinch hitter Max Shellum, McDonald got leadoff hitter Cal Hanson to ground to third and then struck out No. 2 hitter Jackson Snee.

McDonald said he changed his approach to pitching to Hanson and Snee in the sixth inning. "We mixed in some offspeed stuff earlier in the game and went to faster pitches to get them there," he said.

Said Champlin Park coach Cory Davis, whose team has advanced to the past two Class 4A state tournaments: "We seemed to not have a problem getting a fly ball to the outfield except when we really needed one."

Blaine, which has outscored opponents 125-23 this season, had a hard time getting its offense going against Rebels starter Loven, who struck out seven and walked three before running out of pitches with two outs in the sixth inning. High school pitchers in Minnesota are allowed 105 pitches over a three-day period.

"I was making a lot of good pitches, but things just weren't going my way," said Loven, a North Dakota State commit who added that balls and strikes were being called consistently. "I just threw a few too many balls and ran out of pitches."

The Bengals needed the aid of a Champlin Park error to score the game's first run in the second inning. McDonald's ground ball sneaked its way through the infield leading off the inning. He went to third on a single by Jack Haring and scored on a fielder's choice ground ball by No. 9 hitter Jon Coello. But Loven stymied the Bengals until he reached his pitch count limit and was forced from the mound.

Champlin Park reliever Andrew Stifter struck out McDonald to end the sixth inning, but Blaine, which has a team batting average over .400, finally found its offense in the seventh. Haring drew a walk and went to second on a sacrifice by Coello to bring up the top of the Bengals' order. Mike Gottschalk, Jake Dorff and Connor Melton hit consecutive singles to score three runs. An out and a walk later, Joey Messier singled to give Blaine an insurmountable 5-0 lead heading to the bottom of the seventh.

"I have to tip my cap to Blaine," Davis said. "They are a good-hitting team, and we gave them the best we had."

"I'd like to face them again," he said. "I'd like to think we'd play better offensively. I'd like another shot. I just want to be ready for whoever we play in sectionals."

Blaine has one more regular-season game Thursday to close out a 10-day, 10-game run -- at home against Sartell-St. Stephen -- before getting a few days rest prior to the section tournament.

"It's been pretty fun, knowing you're going to be out there every day," McDonald said. "We're pretty deep in pitching, so we know we're going to do well."

So far, so good in the 10-day stretch. The Bengals are looking for their 10th victory in that run that started after losses at Coon Rapids and Minnetonka on May 11 and May 12. 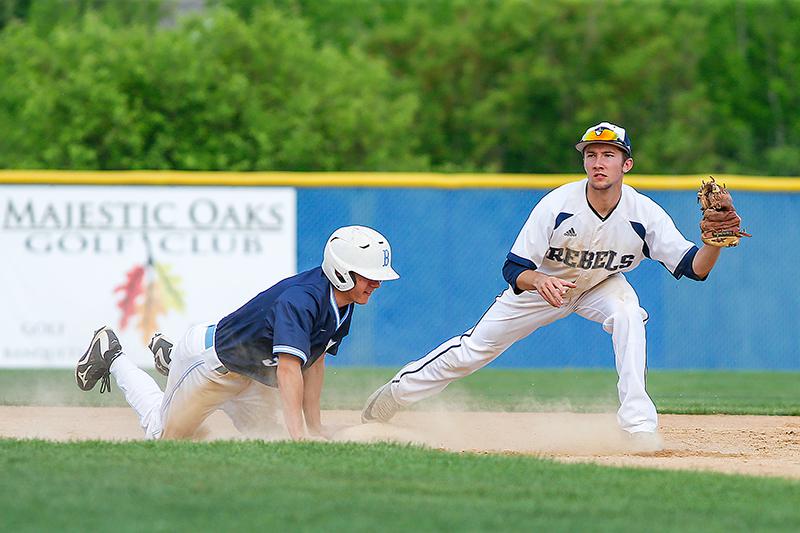 This spring's inclement weather turned what would have been an interesting start-of-season clash between Northwest Suburban Conference titans into a nail-biting winner-take-all end-of-season scrum.

And, for the second year in a row, Champlin Park watched the conference championship slip to Blaine with a loss on its home field.

The Rebels' 11-inning loss to Osseo last spring gave the championship to Blaine. On Wednesday afternoon, the Bengals grabbed the conference title with a 5-0 victory at Champlin Park. The game was originally scheduled for April 12 but was moved after snow erased the first few weeks of the season.

Logan McDonald pitched seven innings, striking out four, walking two and allowing just one sixth-inning double, for his fourth victory of the season. McDonald also scored the game's only run through six innings after reaching base on a Champlin Park error in the second inning.

Blaine, with one regular season game remaining -- Thursday at home against Sartell-St. Stephen -- closed the conference schedule with an 11-2 record. The Bengals won their ninth consecutive game to improve to 16-3 overall.

Champlin Park, which had an opportunity to wrap up a share of the conference crown, fell to 9-4 in the league and 10-9 overall.

Champlin Park starting pitcher Max Loven kept the hard-hitting Bengals under control until he ran out of pitches with two out in the sixth inning. The North Dakota State commit struck out seven, walked three and allowed just an unearned run in the second before he reached his pitch limit. Pitchers are allowed just 105 pitches over three days in Minnesota high school baseball.

Blaine, which had outscored opponents 67-10 in the eight games before Wednesday, scored four runs in the top of the seventh off Champlin Park reliever Andrew Stifter. Jack Haring walked and went to second on a sacrifice, and Mike Gottschalk, Jake Dorff and Connor Melton followed with singles. Two outs later, Joey Messier singled to drive in the final run.

Noah Christianson's leadoff double in the sixth inning was Champlin Park's only hit. 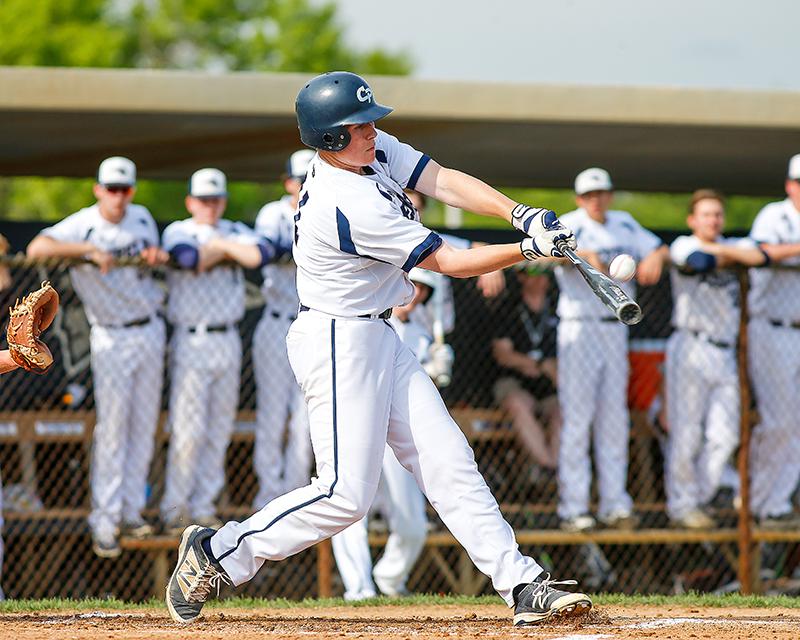 Champlin Park's Max Loven grounds out in the seventh inning. Loven was the Rebels' starting pitcher and allowed just one unearned run over 5 2/3 innings. Photo by Mark Hvidsten, SportsEngine