The Lakers plated five runs in the game's final three innings. The win pushes them ahead of the Panthers by a game in the league standings. 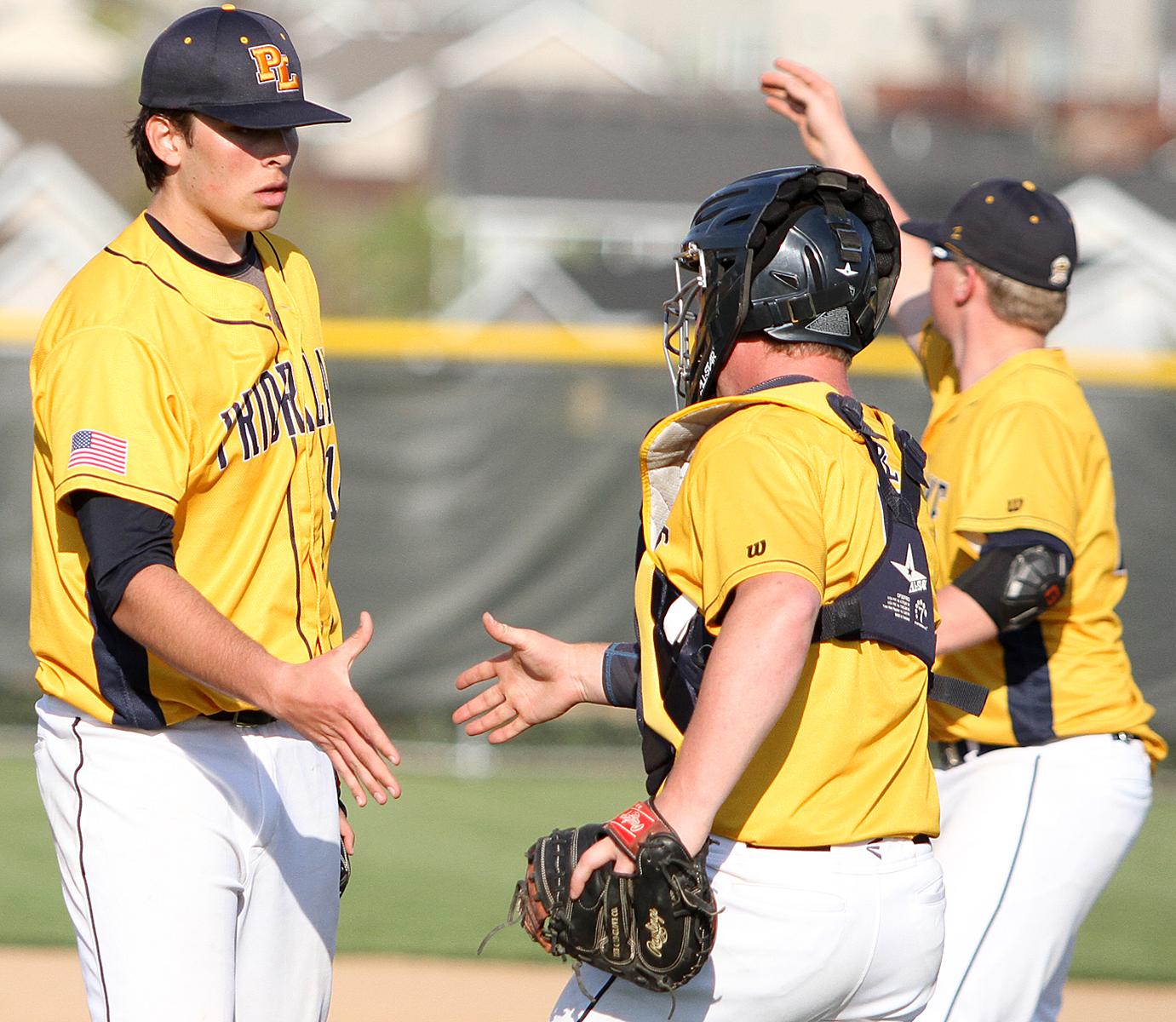 Maybe something is a little different about Prior Lake this year.

With a 6-3 win over South Suburban Conference rival Lakeville North Wednesday, the Lakers (12-2, 11-2) matched their win total from a year ago. And like they’ve done plenty of times this season, they had to be resilient to earn the victory.

Twice, the Panthers (10-4, 10-3) tied the game. The second instance came when Lakeville North’s Division I-bound catcher, Nick Juaire, hit a two-run homer in the bottom of the fifth to make it 3-3. That meant the Lakers’ 3-1 advantage thanks to a Corbin Cross home run in the top half of the inning was short lived. But Prior Lake responded with another run in the sixth and two more in the seventh to stay atop the conference standings with Eastview.

There was never much doubt as to how the Lakers would respond.

“The assistants were like, ‘Are you going to talk to them?” I was like, ‘No, let’s see how they react,’” Prior Lake coach Greg Nesbitt said. “They've reacted really well all year. I didn’t expect anything different. They proved me right, I looked really smart.”

Cross spoke to how he and his teammates conducted themselves.

“As a team we try to stay flat, not to get too high or get too low,” he said. “We’re always battling. It’s something that this team is notorious for, we’re always fighting. It wasn’t good, but we knew we had to fight through that.”

Cross hit a home run, a double and had three RBI to back up a complete-game performance from junior pitcher A.J. Lattery. In Lattery’s seven innings of work, he allowed three runs on four hits, a walk and a hit batsman. He located his fastball well and had his curveball rolling, able to lock up some hitters and notch six strikeouts.

Nesbitt said this year’s Lakers team is more balanced and complete than past editions, and that the results show in their 12-2 start. Prior Lake went 12-10 and 13-10 the last two years.

Resiliency has been a theme this season, like when Prior Lake defeated defending Class 4A champion Eden Prairie 10-8 on May 5, after the Lakers had been down 6-0 early. It was more of the same against another 2017 Class 4A state tournament team in Lakeville North on Wednesday.

“Every victory’s big. We don’t typically have a lot of success against North,” Nesbitt said. “I was glad to see that we’d get a lead, they would come back, and then we would battle and keep battling, not just [be like] ‘Oh, that was our shot, we blew it.’ That was kind of what we talked about down there, is we battled, battled, battled.”

The team has its fun, as well. Lattery has had to carry around a toy wrestling belt featuring a picture of a cartoon turtle because he was the slowest player on the team last year. There are two sets of twins on the squad as well, including Sam and Henry Emmerich. Sam contributed to the Lakers’ first run Wednesday. Sam Tanner, from the other set of twins (brother Russ Tanner is a pitcher), made his varsity debut as a pinch-hitter, smacking a RBI double in the sixth.

“I call them all by their last names, so I never get them wrong,” Nesbitt joked.

The key now for a hot Prior Lake team is to keep seeing how far the Lakers can go.

“It feels really good, and I feel like we have some momentum leading into tomorrow and then the rest of the season,” Lattery said.

Nesbitt added: “I think the biggest thing is we played an extremely good team and we played well, but let’s not let this be the highlight of our season. We were talking about that, we still have — I think one kid who’s very good at math said three-eighths of our season left — and let’s not just be like, ‘We’re good, we’re satisfied, let’s be done.’ They’re extremely aggressive, they want to be different than teams in the past that we’ve had, and that’s good.” 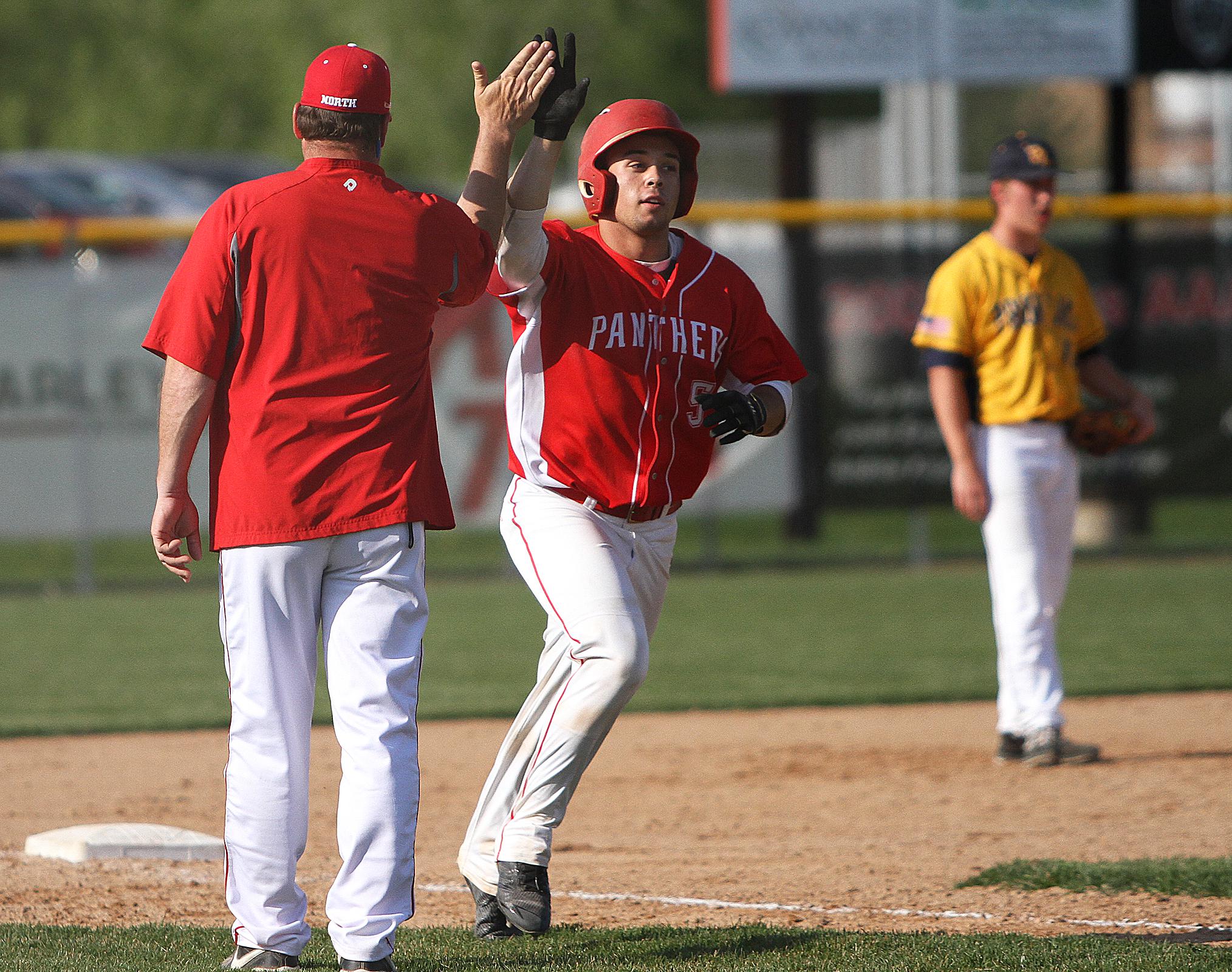 Lakeville North senior Nick Juaire gets a high five as he rounds third after knocking a fifth-inning home run in Wednesday afternoon's 6-3 loss to Prior Lake. Juaire went 2-for-4 with 3 RBI. Photo by Drew Herron, SportsEngine

When Lakeville North countered a big blow made by Prior Lake, the Lakers had a response ready.

Prior Lake scored five runs in the final three innings to earn a 6-3 South Suburban Conference road win at Lakeville North High School on Wednesday. A.J. Lattery pitched a complete game and Corbin Cross had a home run and three RBI for the Lakers.

Pinch-hitter Sam Tanner lashed a RBI double to right-center in the sixth for the eventual winning run and a 4-3 lead. Cross had a RBI double in the seventh and the Lakers got another run in via a balk.

Cross’ homer was a two-run shot to left field with two outs in the fifth, giving Prior Lake a big boost, but Lakeville North (10-4, 10-3) responded in the bottom of the inning when Juaire hit his own two-run blast to tie the game 3-3.