Until the sixth inning, the Raiders had a 1-0 lead. 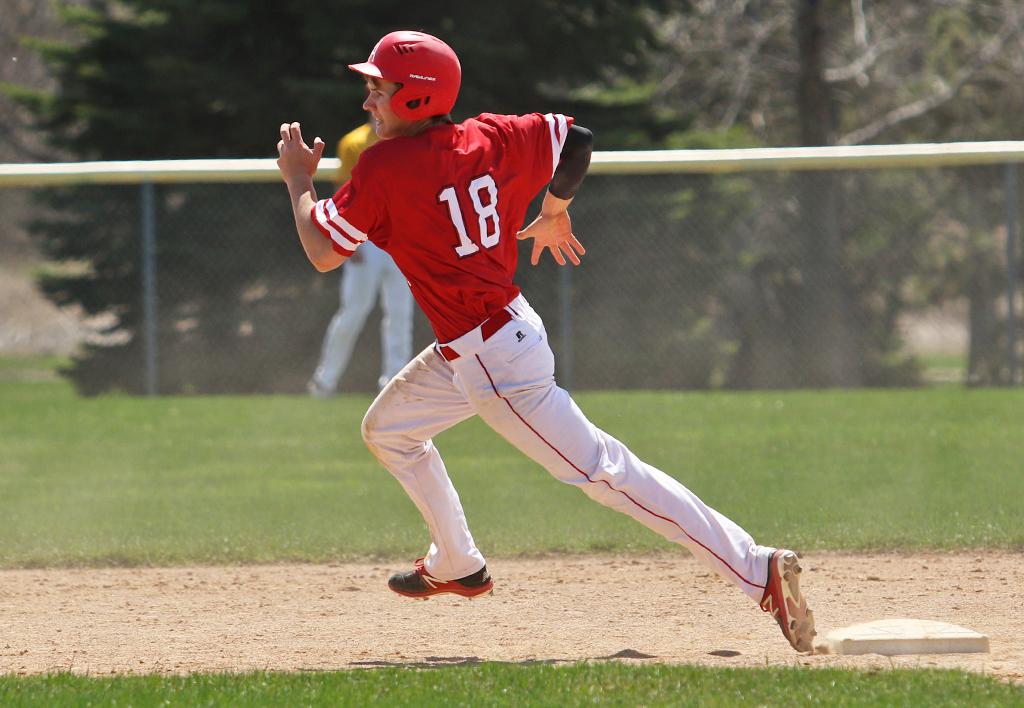 Riley Wempner rounds second base on a late game triple. Wempner broke a 1-1 tie in the top of the seventh inning with a two-run shot to center field giving Austin a 3-1 win. Photo by Cheryl Myers, SportsEngine 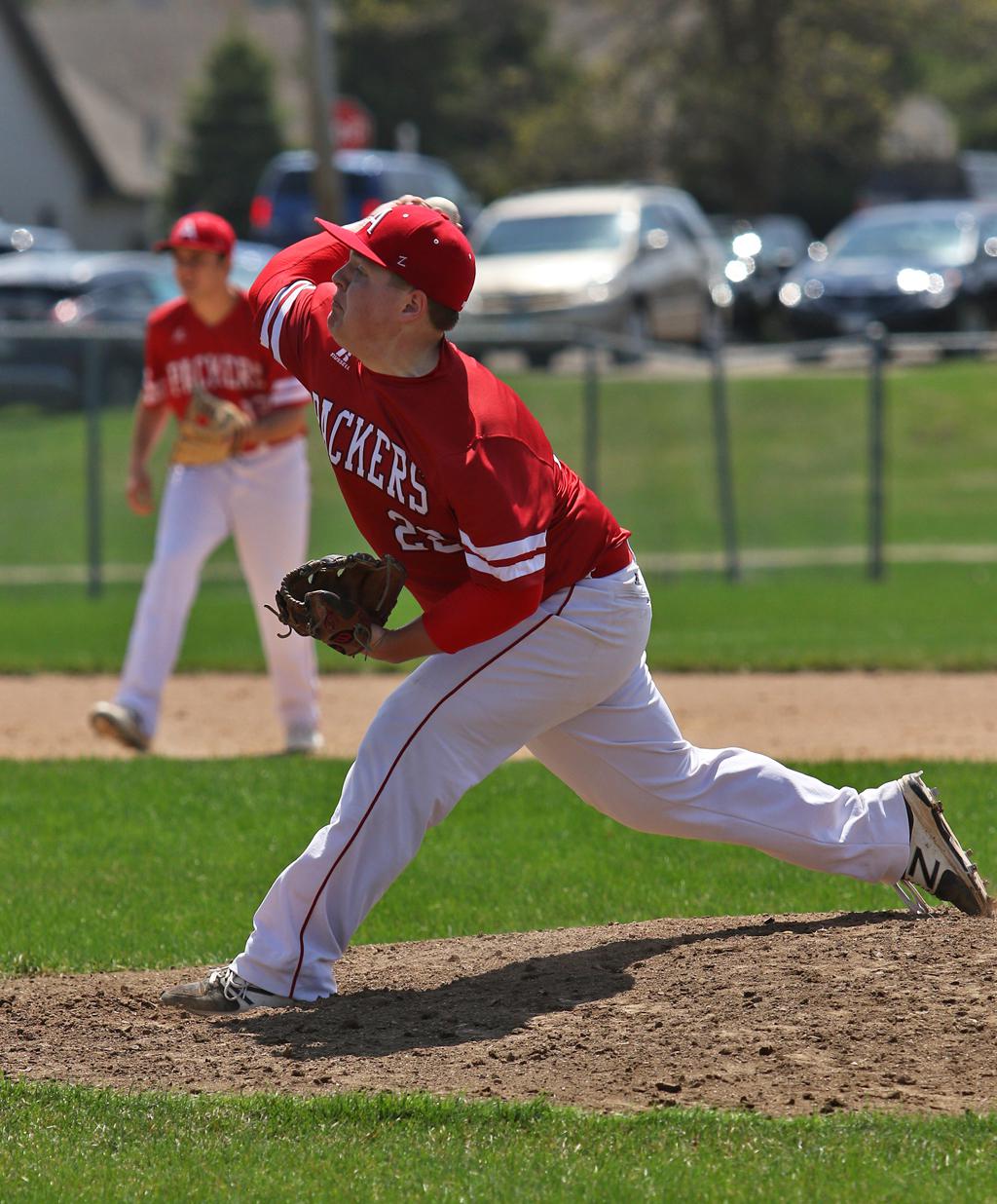 Michael O'Connor struck out nine batters in the Packers' 3-1 win over the Raiders at Northfield High School. Photo by Cheryl Myers, SportsEngine 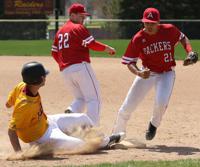 Austin’s lineup knows it will get hits … eventually.

It just took six full innings before the Packers started to piece things together and it was just enough to beat Big 9 foe Northfield 3-1 Saturday at Northfield High School.

Austin (5-2, 5-2) came into the game on the heels of a 9-5 loss to undefeated Owatonna on Thursday and wanted to rebound against the Raiders. It just took a little longer than expected. Austin went hitless the first six innings and finished with just two hits in the game.

Riley Wempner had the biggest hit of the game when he lashed a triple to the fence in the top of the seventh to score two runs to put the Packers up 3-1.

“Everyone in the lineup knows we can hit,” Wempner said. “It’s just a matter of getting dialed in and having good at-bats.”

“To be very honest, we didn’t very many good at-bats throughout the game,” Austin coach Joe Kroc said. “We’ve got to give their kid (Northfield's Derek Albers) credit. He wasn’t throwing the hardest but he was mixing pitches, mixing speeds and hitting spots. Against that kind of a pitcher you have to be thinking up the middle, backside. We were really aggressive and that played in their favor. Luckily we had good at-bats in the seventh.”

Northfield starter Derek Albers threw 6 ⅓ innings, six of those were no-hit ball. He walked four and struck out three.

“Hard way to lose,” Raiders coach Mark Auge said. “He pitched a great game, kept us in it, gave us lots of opportunities to take the lead and we didn’t capitalize. They finally got to him at the end.”

Albers worked with a 1-0 lead after the bottom of the first inning when his RBI groundout scored Blake Christensen, who drew a leadoff walk.

The Packers tied the game in the sixth inning after a pair of errors and a wild pitch allowed Jack Dankert to score.

Austin pitcher Michael O’Connor fought back from that first inning on the mound. He finished with nine strikeouts, two walks and gave up five hits. Carter Hodapp had three of those hits for the Raiders (1-5, 1-4) after hitting two doubles.

“He was fantastic,” Kroc said of O’Connor. “This is his second straight quality start for us. After looking a little shaky in the first inning, he rebounded really nice and filled up the strike zone for the most part after that first inning. We needed him to go deep into the game. In the first inning it just seemed like he didn’t have a rhythm or a tempo so after the first inning we told him between innings, ‘Get on the mound and throw it.’”

After committing eight errors against Owatonna Thursday, the Packers finished with none against the Raiders.

Northfield starting pitcher Derek Albers felt the sting of a 3-1 loss to Big 9 Conference foe Austin Saturday at Northfield High School despite not allowing a hit until the top of the seventh inning.

The Packers (5-2, 5-2) rallied back from a 1-0 deficit in the top of the sixth inning when a pair of Raiders errors and a wild pitch allowed Jack Dankert to score.

Austin grabbed a 3-1 lead in the top of the seventh after Riley Wempner hit a two-run triple.

Albers struck out three and walked four in 6 ⅓ innings. He also hit a batter and struggled to find his control at times. He walked two in the fourth inning but got out of it with a strikeout to end the inning.

Austin’s Michael O’Connor proved a worthy adversary on the mound. He struck out nine batters and walked two in seven innings. 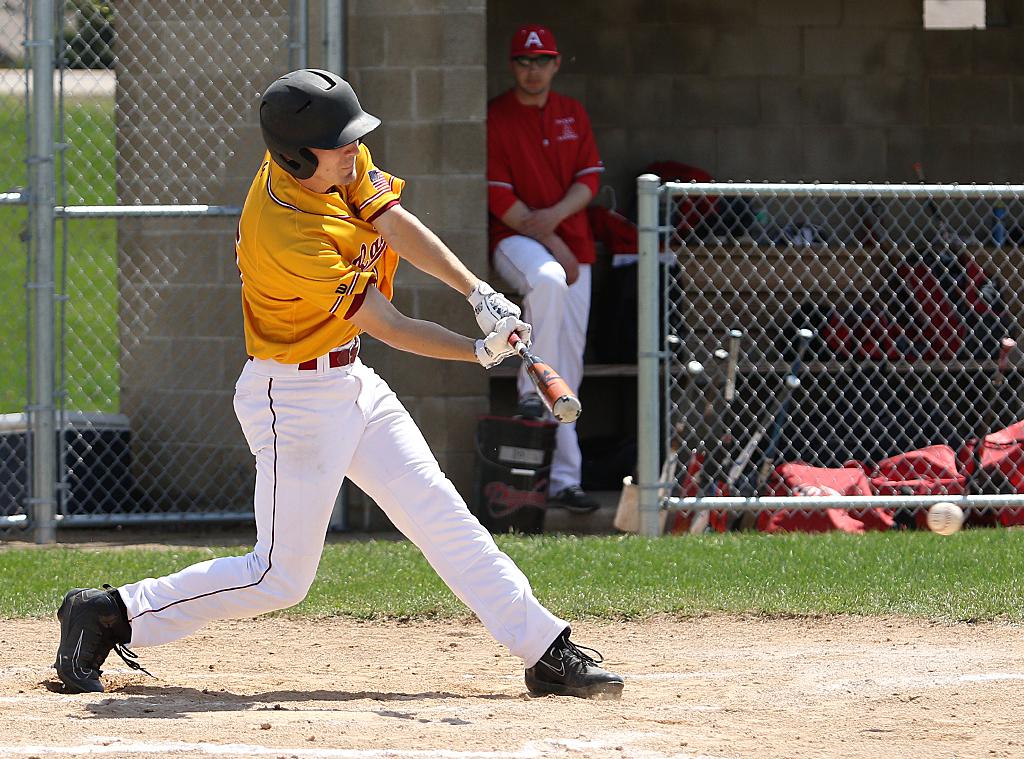 Derek Albers connects with the ball in the bottom of the first inning to send in Northfield's only run of the game. Albers pitched a no-hitter through six innings on Saturday afternoon. Photo by Cheryl Myers, SportsEngine