The Skippers improved to 2-0 after defeating the defending Class 4A champion Eagles. 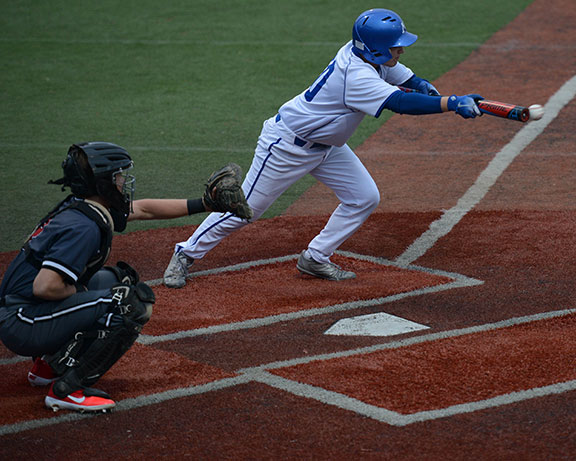 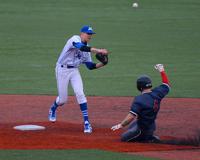 When you dream of watching a baseball game in the spring, you don’t imagine leafless trees overlooking the outfield fences on a brisk 47-degree evening, but that was the setting for a Lake Conference clash between Eden Prairie and Minnetonka on Thursday night.

While the weather was not ideal, both teams were just happy to be playing baseball again.

“It’s going to be awhile before we’re can play on our own surface, so we’re glad that the schedule worked out to allow us to come over here and at least get one in,” Eden Prairie coach John Buteyn said.

The Skippers seemed unaffected by the cold, and they were able to spoil the season opener for last season’s Class 4A champion, picking up a 5-2 win.

Minnetonka coach Paul Twenge was pleased with the way his team played in the victory, and he was quick to point out how much he enjoyed the quality of the game.

“Eden Prairie and Minnetonka together, I love that, it’s just good baseball. No numb talk in the dugouts — they just play baseball,” he said.

There was plenty for him to enjoy when it came to the way the Skippers (2-0, 1-0) executed. On the mound, David Roderick, Aaron Wukmir, Mike Sturek and Christian Cote combined to pitch seven innings while allowing only four hits and two runs. The lineup combined for nine hits, including a streak of four-straight hits in the bottom of the second that scored three runs, all with no outs. Nick Timsen, Andy Andresen and Ben Stolar each had an RBI hit that gave the Skippers a lead they wouldn’t lose.

After Stolar’s hit scored the third run of the inning, Buteyn went to the mound where he said “nothing magic” to Ben Shepard to help him stay confident. Shepard struck out three straight to stop the bleeding and keep the Eagles in the game.

Buteyn was impressed with the way his pitchers were able to battle on multiple occasions to avoid giving up big innings.

“No, we didn’t end up winning, but competing is what we want to see them be able to do and that was certainly a positive to take away,” Buteyn said.

The Eagles (0-1, 0-1) fought all the way through the game. Going into the top of the seventh, they trailed by four runs. Zack Elliot — who went 1-1 with two walks and a hit-by-pitch — and Collin Farris, each reached base against Sturek.

Twenge brought in Christian Cote, who has “ice water running through his veins,” according to Twenge, to face Mitchell Olson.

Cote got Olson to ground into a double play. Ryan Wrobleski would score Elliot with his second RBI of the game (Elliot scored both times) but Cote was able to finish the game off.

Having ice-water veins is not ideal when it’s under 50 degrees, but that didn’t seem to bother Cote Thursday night. 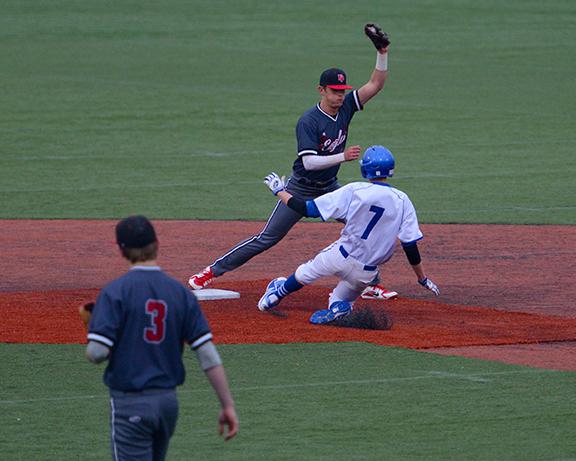 Last year’s Class 4A champion, Eden Prairie, opened its season with a loss to Lake Conference foe Minnetonka 5-2 at Minnetonka on Thursday night.

The Skippers did most of their damage in the bottom of the second inning, when they strung together four-straight hits and turned it into three runs. Nick Timsen, Andy Andresen and Ben Stolar all had RBI hits in the inning before the Eagles could record an out.

After Stolar’s single drove in Minnetoka’s third run, Eden Prairie coach John Buteyn went to the mound to visit with pitcher Ben Shepard. Shepard went on to strike out the side and hold the Skippers to three runs.

Shepard finished with six strikeouts in the three innings he pitched.

The Eagles (0-1,-1) picked up both their runs via RBI hits from Ryan Wrobleski. On both occasions, he drove in Zack Elliot, who reached base on all four of his plate appearances (one hit, two walks and he was hit by a pitch).

David Roderick started the game for the Skippers. He picked up two strikeouts while giving up two hits in four innings pitched.

The Skippers improve to 2-0 after a 10-3 win over Chanhassen on Wednesday.