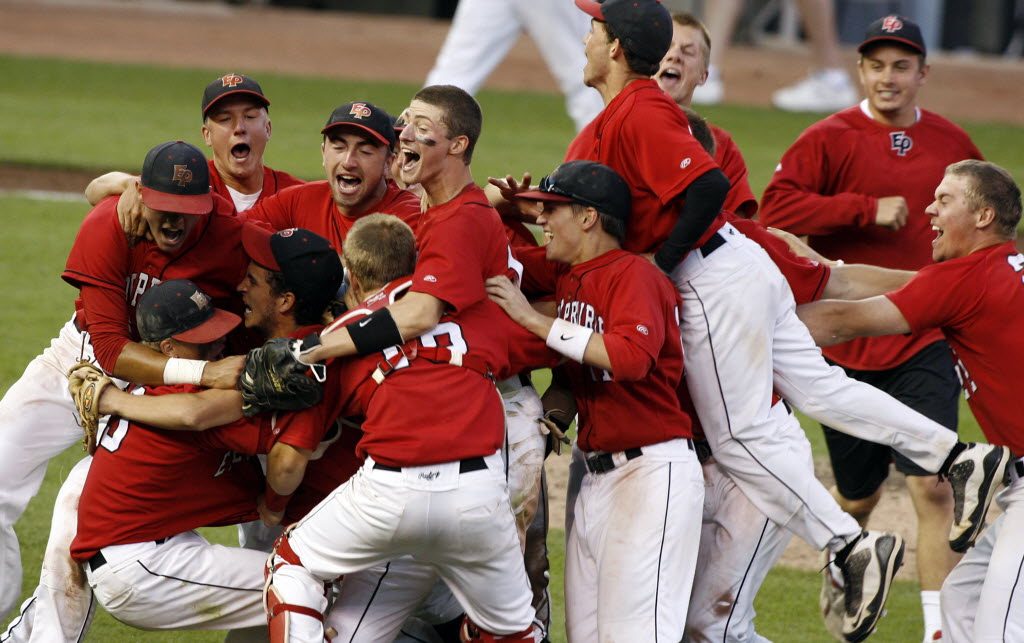 Eden Prairie players celebrated after the final out of the 2010 Class 3A state tournament championship game. Star Tribune file photo

Can anyone spot any weaknesses?

Eden Prairie is back … and potentially better than ever. The defending 3A champion returns four strong pitchers in their rotation, including Lance Thonvold, who just signed with the U, along with Adam Bray (7-0 with a 1.75 ERA last year) and Grant Soderberg (7-0, 48 strikeouts in 45 innings pitched). And while the Eagles lost some defense from last year’s squad, their offense, powered by Gophers recruit Tony Skjefte, could actually be better. The popular opinion is that EP is far and away the favorite to run off with the title again. “I tell you what, Eden Prairie is the team to beat,” Hopkins coach Neil Lerner said. With a restocked version of a team that lost only one game
last season, will anyone be able to do that?

The debate over which composite bats are truly safe has been going on for a while. But this is this first season in which a major exodus is in sight. The new composite bat certification (BBCORE—Bat-ball coefficient of restitution) that will ban nearly all composites currently being used isn’t going into effect until next year, but the questions—about just how much these new sticks will change the game—are already pouring in. “It’s going to be a lot different next year,” said Eden Prairie coach Mike Halloran. He added that the few of his kids who tried to adapt early to the newly tested composites dropped them quickly after finding a major drop-off in power. “You’ll see changes, as far as strategy, maybe more bunting … and the stats in the paper, those are going to look quite different,” Halloran said. Most coaches say they are sticking with the old ones while they can.

Every year, as the snow melts and the green tips of grass peer through in anticipation of warmth and baseball, we ponder just which raw athletes will break out of their shells and find “the big season.” This year, keep an eye on Centennial’s Sam Alt, a senior who earned an all-conference honorable mention last year after averaging .422 and striking out just five times in 84 at-bats, and senior Adam LaMere, who is well on his way after pounding five homers and racking up a .782 slugging percentage last year. Hopkins junior righty Tim Shannon could also see a big season after going 5-2 with a 1.74 ERA and 45 strikeouts in 45 innings last year.

When it comes to the tournament, hurry up and wait. Because of conflicts with the Twins schedule, the state tournament is going to have a very different feel this season. In most years, the entire show is done and won in a couple of days. This year, there will be an unprecedented three days off between the semifinals and the championship game. After the winners advance on Friday, June 17, they will not head to Target Field for the title games until the following Tuesday. Minnesota State High School League director of information Howard Voigt said that while the move is unorthodox, he thinks teams will cope. “It’s definitely different than what we’ve ever had here, completely,” he said. He said  the  MSHSL wanted to keep the sectional tournaments as similar as possible to recent years. “But I think the chance to play at Target Field sort of trumps that.”

Burnsville, Eastview and Apple Valley — each packed with DI talent — should all fight to the end in the new-look conference. Prior Lake, which boasts a strong group of juniors, including Matt Arends, who hit .487 last year and ranked among the top in the metro in RBI and doubles, could make a push as well.

Tony Skjefte, Eden Prairie: After excelling at 2B last year, the four-homer, .447 hitter is taking his talents to short.

Austin Malinowski, Centennial: The senior lefty, who is committed to Arizona, might be tops in the metro. He went 7-0 with a 0.88 ERA last season and struck out 61 in just 40 innings.

Aaron Gretz, Apple Valley: The senior catcher, who has one of the best pop-times to second base (1.96 seconds), just signed with Ohio State.

Robert Youngdahl, Hill-Murray: The lefty, who signed with Kansas State, went 4-1 with a 2.24 ERA last year.

2. Centennial: After strong improvement during the season last year, the Cougars look ready to roll. Good speed, good pitching and killer offense will carry them.

3. Burnsville: While the Blaze is doing a lot of experimenting to start the season — with two major players and a handful of other role players switching positions — they have the pieces to finish strong again.

5. Hill-Murray: The Pioneers have experienced pitching and a deep lineup. Senior shortstop Connor McCallum (.463, 28 RBI) could be even better this season.