With the new policy, teams across the state look for a competitive edge while protecting youth arms. 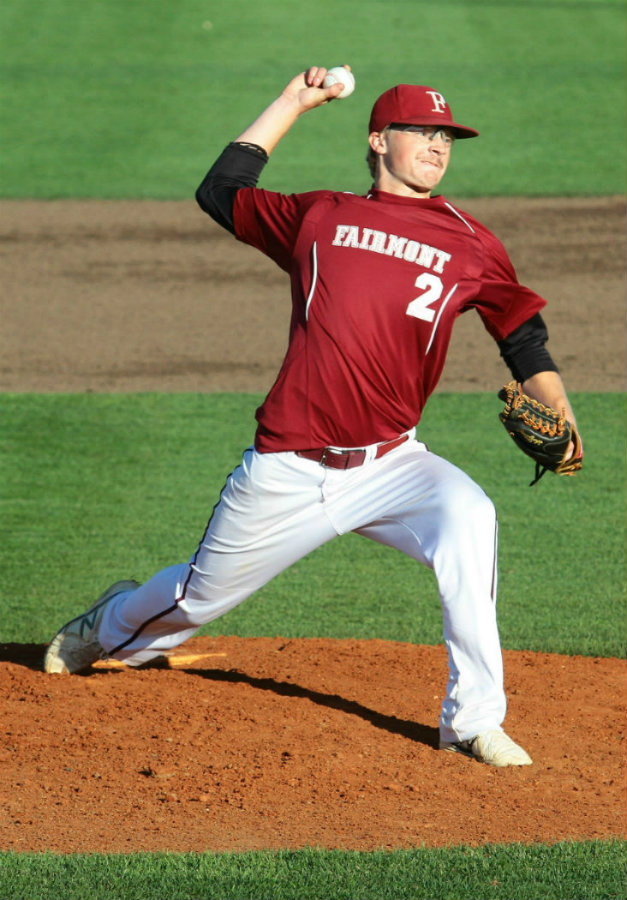 Taking a mandatory hiatus of at least one year from the sport you’ve been playing your entire life isn’t what most young athletes plan for, but it’s a situation more and more high school pitchers are encountering.

Spencer Chirpich, a redshirt sophomore at North Iowa Area Community College, grew up in Fairmont and has played baseball as far back as he can remember. As he was preparing to start his senior year at Fairmont in the summer of 2014, Chirpich had an MRI on his sore pitching elbow and learned that the ligament was torn.

“I didn’t feel a pop like most guys do,” Chirpich said. “I started feeling a pain in my elbow when I threw the ball. It was just the wear and tear over time that made it deteriorate.”

Chirpich had Tommy John surgery the following summer, joining the growing list of young athletes who require the surgery to repair pitching injuries.

According to the Pitch Smart program developed by USA Baseball and Major League Baseball, Tommy John surgery among high school-age players has been steadily on the rise for the past two decades. The most significant factor contributing to the need for the procedure, according to Pitch Smart, is overuse of the arm on a daily, weekly, and annual basis.

Chirpich agrees that this could be the main factor leading up to his own surgery, having been a part-time pitcher for a dozen years.

“I don’t think I ever threw too many pitches in a game,” Chirpich said. “I think it just wore out from the numerous games played every day in the spring and summer.”

After his surgery, Chirpich took a whole year off of pitching.

“I was in a cast for a week, then was put back into the same hinge brace I had used the previous summer that limited my arm movement,” Chirpich said. “My rehab consisted of doing shoulder exercises every day and trying to get my arm back straight to where it was. After that, I started a throwing program that allowed me to either throw a certain number of throws at a certain distance or it gave me a time limit of throwing until I was cleared to pitch in a game again.”

Though some pitchers are able to return to pre-injury form after the surgery, Chirpich said that his elbow isn’t the same as it used to be. He only pitches once a week, similar to what he did in high school.

Pitch Smart was implemented two years ago as the trend of youth pitching injuries continues upward. Subsequently, the National Federation of High School Associations (NFHS) mandated a pitch count limit for all of its association schools in an effort to limit arm overuse and injuries among youth pitchers, though the NFHS left it up to each individual state, including Minnesota, to decide what that limit would be.

Kevin Merkle, associate director of the Minnesota State High School League (MSHSL), hopes the new pitch count policy will prevent situations like Chirpich’s. Though the NFHS mandated the policy to begin in 2017, the MSHSL had plans in the works previous to the season.

“We had been talking about a new policy for several years, partly because the rule before was outdated,” Merkle said. “Coaches have taken care of pitchers well, but having a policy puts more emphasis on it. By mandating the policy, everyone adheres to it.”

The new pitch count policy limits varsity and lower level pitchers to a predetermined number of pitches per game as well as a subsequent number of days’ rest after pitching. Merkle expected the policy to have some effects on the game, though some he hadn’t thought about.

“If a pitcher wasn’t doing well during an outing, for example, a coach could take them out right away to save their arm for an upcoming game,” Merkle said. “Coaches had to become strategic and plan ahead in that respect.”

Merkle hopes the policy will encourage more athletes to join the sport. “There’s no roster limit during the regular season,” Merkle said. “It gives more kids an opportunity to pitch and forces coaches to develop more pitchers.”

Developing more pitchers, as Merkle suggests, gives athletes in larger schools a chance to get into game action where they previously might not have. This effect could benefit larger schools, but may work against smaller schools who have a smaller pool of athletes interested in the game in the first place. 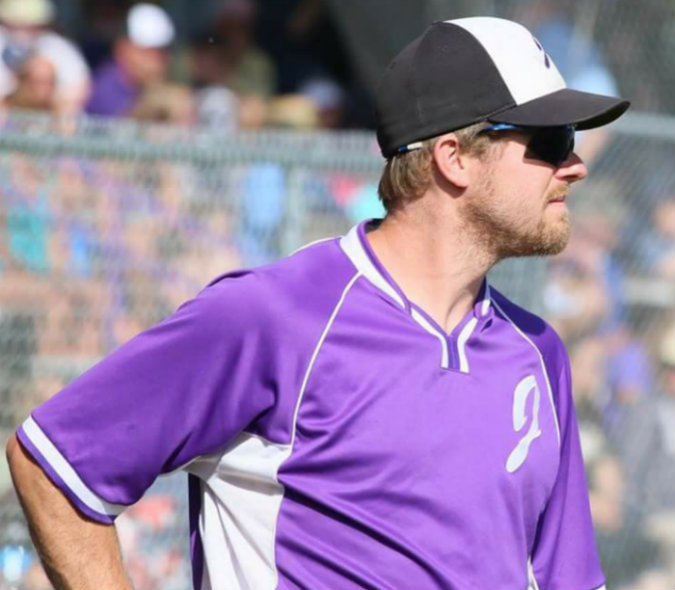 Scott Chirpich, Spencer's older brother, is the Martin Luther/GHEC-Truman coach. His Jaguars made the Class 1A state tournament a season ago. Photo courtesy of Randy Chirpich

Spencer Chirpich’s older brother Scott Chirpich, coaches a team near the I-90 corridor in southern Minnesota that combines Martin Luther, Granada-Huntley-East Chain, and Truman high schools, to form the Jaguars.

Despite the schools’ combined total enrollment is 160 students and the new pitch count policy, the 2017 Jaguars qualified for the Class 1A state tournament with a varsity roster that consisted of 15 players, including two eighth graders and only three seniors.

One thing Scott Chirpich knows he must emphasize to his athletes in order to keep his few pitchers healthy is proper arm care during the season.

“For one, they need to make sure to ice after practice,” Scott Chirpich said. “Also biking, conditioning, core work, and weight training are important. We did shoulder circuits during the season, too, which seemed to help their strength and health.”

Pitch Smart’s guidelines suggest that arm injuries are more likely to occur when athletes don’t follow proper strength and conditioning routines. This is something Scott Chirpich makes sure to stress with his athletes.

“They need to make sure they are properly stretching and warming up enough, especially when they play in the summer,” Scott Chirpich said. “Some players tend to think that since it’s warmer in the summer, they don’t need to spend a long time warming up.”

Pitch Smart also advises that players do not play catcher on their off days of pitching, since catching is the “next most throwing-intensive position and results in far more throws than players at other positions.”

However, in some situations, playing only one position isn’t an option. “Being a smaller school, your pitcher has to play a second position,” Scott Chirpich said. “Then they don’t get a full day of rest, which means that eventual wear and tear will still be there.”

Scott Chirpich’s team may be in rare company for their small size, as his top three pitchers from the 2017 season will return again next year.

He has advised them to be ready to go as soon as the season begins, reminding them that getting in the gym and keeping their arms strengthened in the offseason will help them in the long run. For the first couple weeks of the season, Scott Chirpich tries to keep his pitchers throwing less than 75 pitches to build up his starters’ strength.

Even with the new policy in place, there’s more to be done

Jason Verdugo, athletic director at Hamline University, has an extensive baseball background, having pitched in the San Francisco Giants organization and spending time coaching for both the Saint Paul Saints and Hamline University. He hinted that the high volume of pitches youth are throwing each year—a risk factor mentioned by Pitch Smart—is a unequivocally more than it used to be.

“Even when I was in high school, I played about 20 games in the season and probably the same amount in the summer,” Verdugo said. “These days, kids are playing 50-60 games a summer. They’re throwing the game in a live situation far more than I ever did. When I got to high school, my arm was fairly fresh. These days, kids are absolutely burnt out.”

One criticism of the new policy is that pitch count should be based on age rather than level at which a pitcher plays.

“Think of it like a quarterback or a hockey goalie,” Verdugo said. “At different ages, everyone is a different size and has different strengths and abilities.”

However, Verdugo noted the difficulty in enforcing a pitch count to varsity rosters that span a wide range of ages. With age and experience should come higher limits.

“It makes it tough when you implement legislation that way,” Verdugo said. “It would be too tough in the game situation to track who is what age and make sure both teams are on the same page there.”

Verdugo knows that there are more factors that contribute to injuries aside from the number of pitches thrown in a single game, however.

“I think the new policy will help with the volume of throwing, but the velocity of fastballs is skyrocketing,” Verdugo said. “A lot of that is technique, a lot is training. With that, I assume there will still be some arm injuries because it’s an unnatural arm motion. Look at some of the still shots of pitchers when they are in the middle of a throw—it looks like their arm shouldn’t bend or move at that angle.”

“Even at the MLB level, some of the best pitchers who were in the best shape and took the best care of their bodies—Mariano Rivera and Joe Nathan, for example—still had Tommy John surgery,” Verdugo said. “Sometimes you just can’t prevent the issue.”