With their normally stingy pitcher touched for two runs, the Pioneers put togther rallies keyed by an unusual contributor. 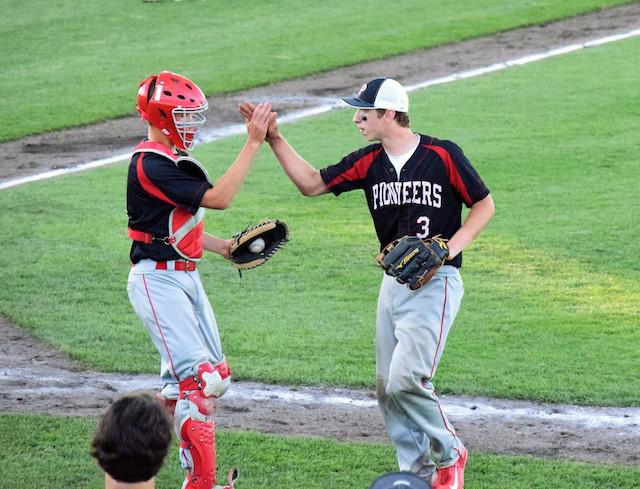 Pierz catcher Preston Rocheleau and pitcher Matthew Kummet celebrate after recording the final out of the game. Photo by Taylor Lunemman, SportsEngine

Pierz pitcher Preston Roucheleau had given up just one run all season. His coach, Dan Saehr, knew that the dominance would end, that Roucheleau would eventually find himself in a foreign situation.

In a year full of shutouts, the Pioneers were down 2-0.

Roucheleau pushed dirt on the mound with his foot, and he clenched his fist. He showed no exasperation, no frustration. He struck out the next batter. When he walked into the dugout, according to his coach, he told his teammates, “Well boys, we got to score a few runs.”

“Of course we’d like him to throw a shutout all the time,” Saehr said. “But the reality is sometimes you got to tip your hat to the other team. Preston probably wasn’t as sharp as he’d been all year.”

Roucheleau ultimately went 6⅓ innings, struck out six and allowed two runs on five hits, but Pierz couldn’t rely on him in the way the Pioneers had prior earlier this season.

Help came in the bottom of the inning, with a leadoff triple by Lane Girtz, who eventually scored on sacrifice fly. The bottom of the next inning began with a sub .200 hitter – junior Brandon Dickmann -- and that’s when the contest swung Pierz’ way.

Dickmann said he “did not have the best hitting season this year.” He had eight hits coming into Thursday. His ninth was a single to begin the bottom of the fifth, which ended up with the Pioneers scoring two runs.

An inning later, Dickmann singled again, into right field, this time driving in two runs to push the Pierz lead to 6-3, where it would ultimately remain.

The Pioneers will play Duluth Marshall in a semifinal on Friday. New London-Spicer, which was making its first appearance in the Class 2A tournament, will face No. 2 seed Belle Plaine in the losers’ bracket.

“You got to trust in the kids and hope they’re going to come through,” Saehr said. “Boy did they ever tonight.”

After the game, Dickmann raised up his right arm, displaying a red mark on the inside of his forearm, where a teammate, well after his big hits, had given him a congratulatory slap.

Pierz junior Preston Rocheleau, who entered the game having allowed one run all season, gave up a lead-off home run to New London-Spicer’s Wyatt White and another run in the fourth.

Pierz tied the game in the fourth, then took the lead with a two-run rally started by a single from first baseman Brandon Dickmann, who had just eight hits all season coming into Thursday. An inning later, Dickmann singled to bring in two more runs. 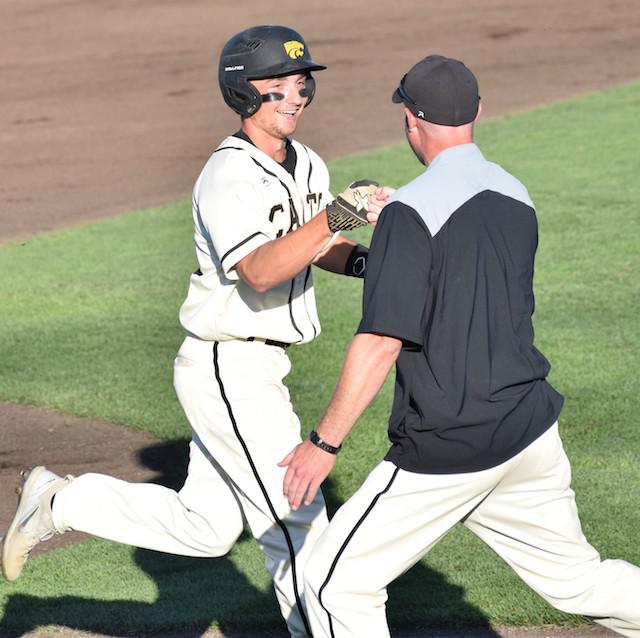