Three story lines to watch this weekend for all four classes of state baseball. 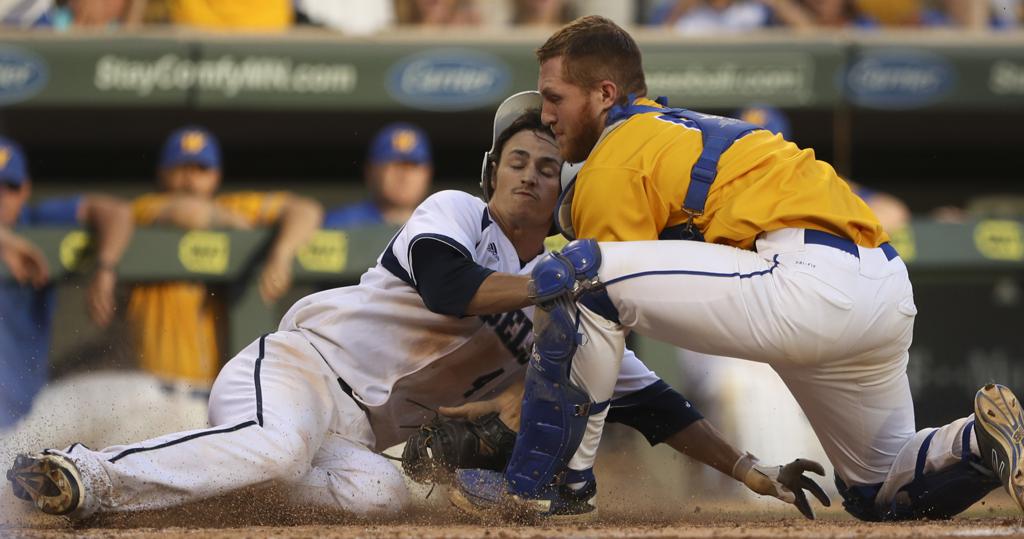 Defending champ Wayzata (in gold) and runner-up Champlin Park are back at state.

1. Look familiar? Seven of the eight teams are back from the 2016 field, and six of them finished first through sixth. Wayzata is the defending state champion while Champlin Park is coming off a second-place finish. Woodbury wound up third, followed by Lakeville North, Burnsville and Maple Grove.

1. Unbeaten vs. unbeaten?: The last time two undefeated teams met for a state championship was 1952, when Halstad (13-0) beat Austin (16-0) 9-2. It could happen again this year, with top-seeded Waconia (23-0) and No. 2-seeded St. Cloud Tech (24-0) on opposite sides of the bracket. St. Cloud Tech won its only state title in the initial season of the state tournament in 1947. Waconia has never won the crown.

2. Welcome back: Two teams in the field have been waiting quite some time to return to the state tournament. St. Thomas Academy will be making its first appearance since 1983, while Alexandria’s drought dates to 1975.

3. Winning coach: Mahtomedi coach John Hardgrove is the winningest coach in the state tournament. He has the fifth most career wins (402) among active coaches. The Zephyrs (14-10) are currently riding a six-game winning streak.

3. State-seasoned: Belle Plaine has 14 players who were members of their Class 3A state tournament football team in the fall. Junior catcher Jackson Stauffacher will be participating in his seventh state tournament (four wrestling and two football before baseball).

1. First-time champ: No team in the field of eight has ever won a baseball state championship. Parkers Prairie is the No. 1 seed for the second consecutive year. The Panthers lost to Springfield 4-2 in 11 innings in last year’s state finale.

2. Glass slipper with cleats: For a Cinderella story, look no further than Pillager (15-10). Four weeks ago, the Huskies were 8-10 after a 10-1 loss to Royalton. They have since put together seven consecutive wins to earn the program’s first state tournament appearance.

3. Playing up: Legacy Christian (19-4) beefed up its schedule with the state tournament in mind. The Lions defeated Class 3A schools Blake and St. Paul Highland Park, and lost to another (Richfield) in extra innings. Blake reached its section championship. The Lions also suffered a defeat at the hands of Class 4A Armstrong.