Click to see which teams earned the top seeds in each class. 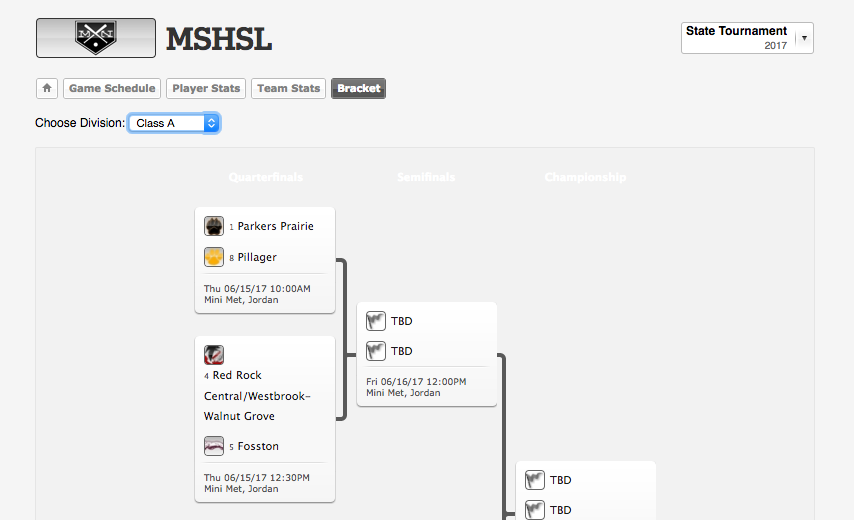 The state tournament brackets for each class have been updated on the Hub. Below is a brief look at the teams taking the top seeds in each bracket for the tournaments, which begin Thursday at four locations across the state.

Parkers Prairie: The Panthers (23-2) are out to prove they're worthy of the No. 1 ranking in the coach's poll and the top seed in the Class 1A field when they kick off the tournament quarterfinals against Pillager (15-10) Thursday at 10 a.m. Parkers Prairie is making its second straight consecutive state tournament appearance as a No. 1 seed, and this time it is ready to redeem last year's 4-2 championship loss to Springfield.

Legacy Christian Academy: The No. 2 seed Lions (19-4) attempt to walk away with a No. 1 attached to their name as they look to win a state title. Legacy Christian, a No. 4 seed in last year's state tournament, saw its championship dreams dashed by an 4-3 upset loss to fifth-seeded Hinckley-Finlayson in the quarterfinals. This year, the 12-senior lineup will face seventh-seeded Ely at 3 p.m. Thursday with a mission to make a much longer postseason run.

Martin Luther/GHEC-Truman received the No. 3 seed in the state tournament, while Red Rock and Fosston round out the remaining seeded teams.

Minnehaha Academy: The defending state champions make their fourth state tournament appearance in five years as the top seed in the Class 2A bracket. The biggest threat to the Redhawks (23-2) repeating could be Belle Plain. The Tigers are the second seed in the tournament, but are the top team in the coaches' Class 2A poll. The No. 2-ranked Redhawks open the tournament against eighth-seeded Warroad (19-6) Thursday at 10 a.m.

Belle Plain: The Tigers are appearing in their second consecutive state tournament, which is a do-over attempt. Belle Plaine (20-2) lost to rival Minnehaha Academy 5-1 in last year's state championship, and it surely would like another shot to reverse the outcome this season. The Tigers play seventh-seeded New London-Spicer (18-5) in the quarterfinals on Thursday at 3 p.m.

Pierz is the third seed, Maple Lake the fourth and Rochester Lourdes is the fifth.

St. Cloud Tech: These Tigers also bear a perfect record, with 24 wins, and the No. 2 seed could be on course to collide with Waconia in a cage match for the title. The Wildcats and the Tigers are eerily similar -- even beyond their mascots: St. Cloud Tech last made a trip to state in 1997. The Tigers face No. 7 seed Hibbing (17-8) Thursday at 3 p.m.

Third-seeded Alexandria, fourth-seeded Red Wing and fifth-seeded Marshall complete the top half of the bracket.

Wayzata: Last year's state champions look to defend the title as the top seed. Wayzata (17-6) takes on Lake Conference rival and No. 8 seed Eden Prairie (16-9) Thursday at 10 a.m. in the state quarterfinals. The Trojans defeated the Eagles twice in the regular season 3-0 and 4-2.

Forest Lake: The Rangers (18-6) captured the No. 2 seed at state tournament and already have defeated Wayzata this season, topping the Trojans 4-2 in the regular season. Forest Lake has the chance to continue their five-game winning streak with a win in the quarterfinals against No. 7 seed Maple Grove (17-8) Thursday at 3 p.m.

Champlin Park nabbed the No. 3 seed, while Lakeville North is No. 4 and Burnsville No. 5.