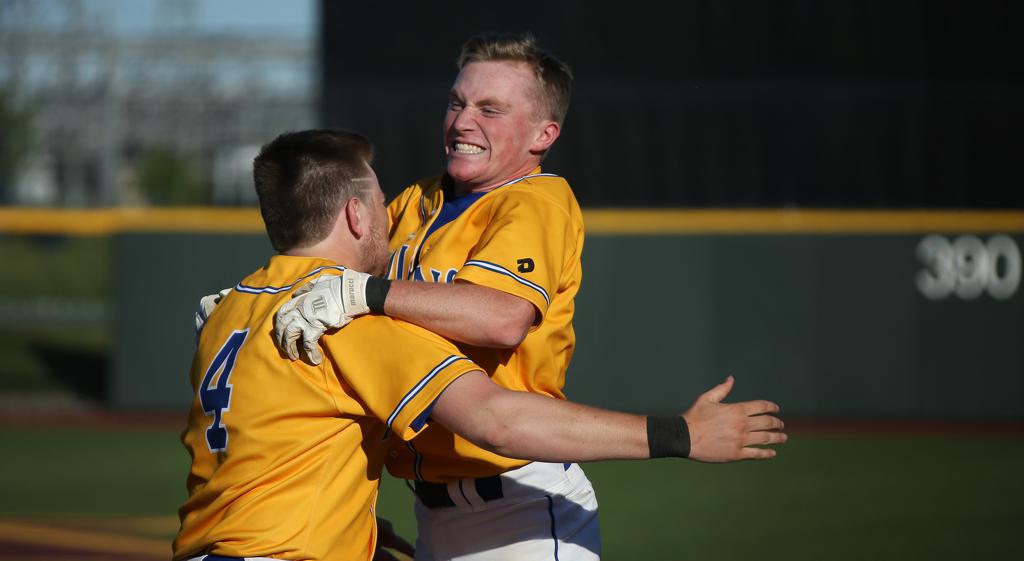 Wayzata senior pitcher Will Oberg gave up three runs to put his team down 3-0 in the section final game. So, he stepped up to the plate in the bottom half of the inning and cleared the bases with a game-tying triple.

He also surrendered the lead in the seventh inning while trying to close out the game. So he started his team’s winning rally with a double.

Oberg’s contributions pitching late into games and driving the baseball have been constants all season. He said he focuses on intensity, competing and working hard.

“If you do all that, good things are going to happen,” Oberg said.

The No. 4-ranked Trojans (16-6) ended up on the good side of things with their 7-6 walk-off win over Hopkins on Tuesday in the Class 4A, Section 6 final. The victory sends them back to the state tournament, where they won their first state baseball title last year.

It’s a great feeling for Oberg, who expected to be here again.

“But obviously a lot of things have to go our way,” Oberg said. “You have to work hard to get here. And that’s what we did.”

“For the most part, we’re 17 fresh faces from last year,” DeWitt said. “It’s been nice to see them pull through when the moment counts.”

Oberg is one of those guys, contributing from the mound, with his bat and as a leader in the dugout since the state tournament ended last season, organizing workouts and simply leading by example, DeWitt said.

“That’s why he’s a senior captain,” DeWitt said. “He’s a leader for us, and for the most part for our season, we kind of go the way he goes.”

He learned a lot from his teammates last year on how to lead and play the game the right way.

Oberg said he just tries to do what they did and teach the younger guys.

Oberg is 7-1 on the mound this season and has a .348 batting average. He didn’t throw a pitch last year since the Trojans already had a senior-filled rotation. Instead, Oberg played first base and was the cleanup hitter.

With his experience winning a state legion championship in 2015 and winning a state title with Wayzata in 2016, Oberg expects to win and has instilled that among his teammates, according to DeWitt, who added he’s a kid “flying high on confidence.”

Said senior teammate Bobby Isbell: “He’s an amazing athlete, and he’s been huge for us all season.”

Isbell and senior Tyler Young are also captains. Isbell drove in the winning run in the section final with a single down the third-base line. Young, the catcher, drove in two runs with sacrifice flies.

The Trojans might have found their momentum at the right time. They came into the section tournament on a three-game skid in some close games before outscoring opponents 41-8 in four Section 6 games, including two victories over Lake Conference foe Hopkins.

The team slogan this year is “We are one.” DeWitt started it throughout the fall and winter to build cohesion within the mostly new group of players to stick together, win together, lose together.

“There’s a reason why we don’t put names on the back of our jerseys,” DeWitt said. “Because the name on the front matters far more.”