The Eagles earned a trip to the Class 4A state tournament after beating the Sabers in consecutive games. 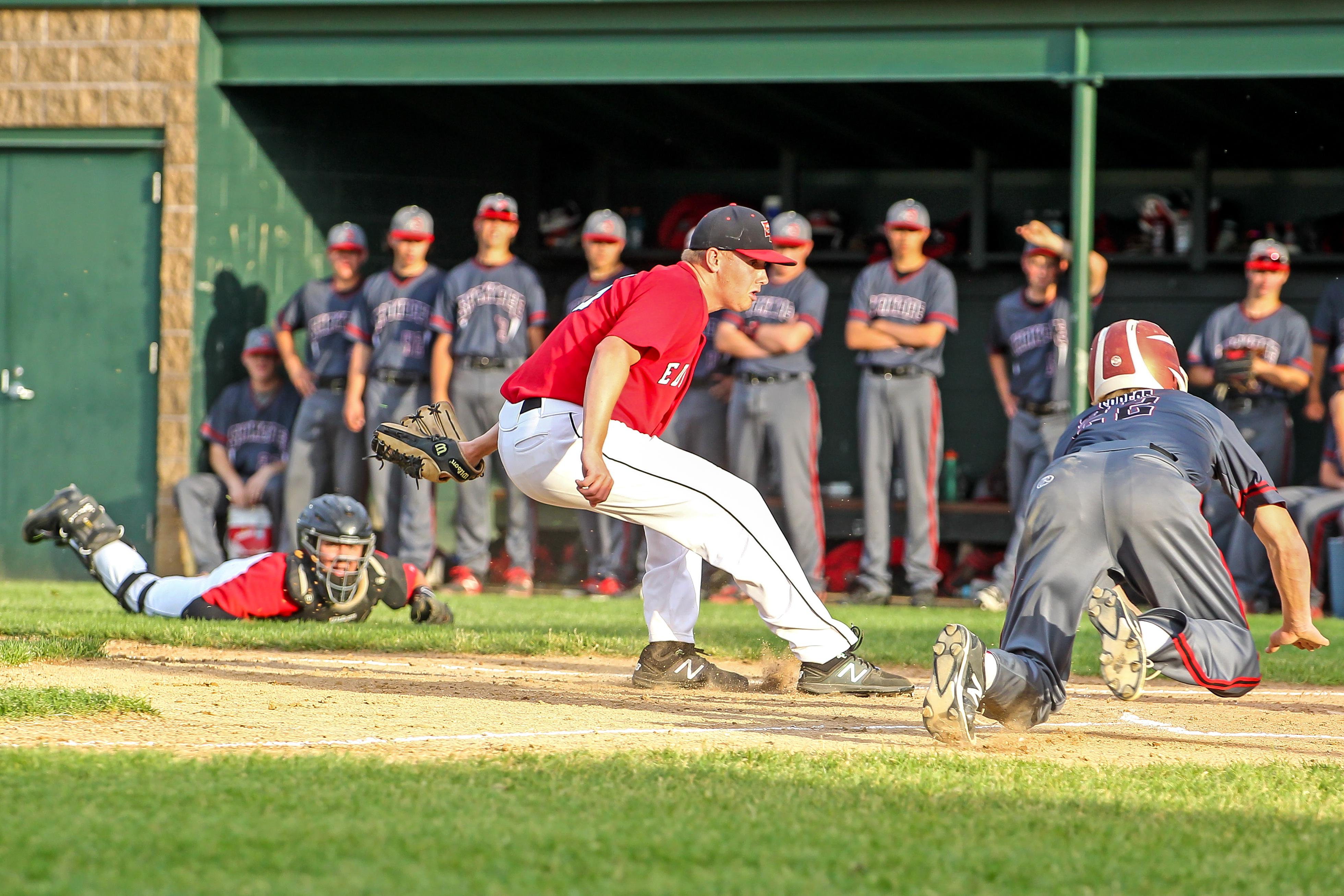 Eagles pitcher Jack Zigan, center, is too late to make the tag on Shakopee's Addison Leininger, who scored on a passed ball. After giving up three runs in the third, Zigan rebounded with five strikeouts in the next two innings. Photo by Mark Hvidsten 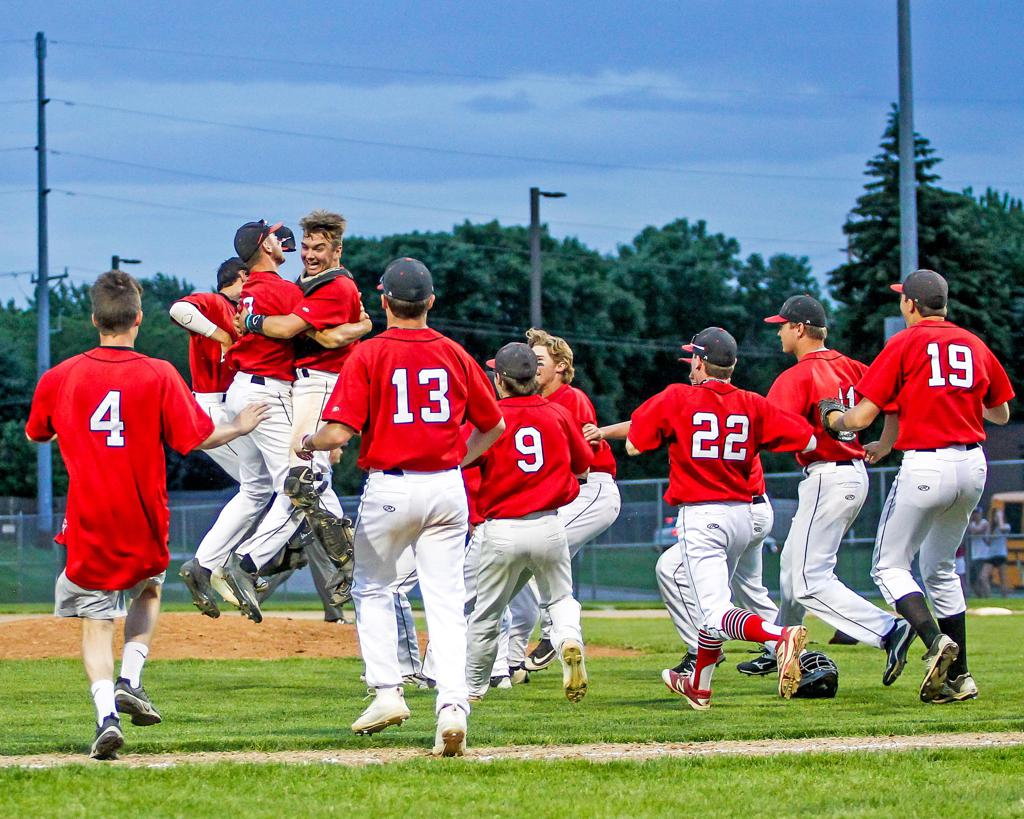 Eden Prairie players celebrate their 7-3 victory over Shakopee in the Class 4A, Section 2 championship game. Photo by Mark Hvidsten, SportsEngine

Eden Prairie was in control of its home field for most of the Class 4A, Section 2 championship game Wednesday night. The only time the Eagles trailed was after the top of the third inning, when Shakopee scored three runs to take a 3-2 lead.

The next two half innings was a reflection of the entire game.

In the bottom of the third, Eden Prairie (13-9) loaded the bases with no outs. Connor Young hit an RBI-single, his second RBI of the game, to tie the game. Ryan Wrobleski followed that up with a ground out to first, scoring the go-ahead run. Sam Ludzack did an impressive job of allowing just two runs in the inning, but the Eagles did enough to take the lead, a lead that they wouldn’t lose.

The reason they held onto the lead was due to the dominant pitching by Jack Zigan. He had a no-hitter going into the third inning, but he ended up allowing three hits and three runs in that inning. It looked like this was going to become a back-and-fourth game but Zigon made sure that wasn’t going to happen.

He took the mound in the top of the fourth with a lead, determined not to lose it. He struck out the side in the frame and he never looked back from there.

Zagin realized the umpire had a favorable strike zone to pitchers, and he took advantage of that form the start.

“In the first inning, I realized the ump was giving about a ball out and a ball in,” he said. “Throwing the fastball inside-outside, they were having a tough time catching up to that.”

“We went with our best guy in this game to finish it off,” he said.

Zigan was the headliner, but the Eagles lineup was impressive as well, especially the top of the order. Their top three hitters, Zack Elliot, Mike Espe and Will Pahl combined to hit 8-11 form the plate with three RBI.

The Sabers (14-11) were the six-seed in this tournament, so they had an impressive run to get to the championship game. Shakopee coach Tom Schleper said this run shouldn’t shock people.

Eden Prairie’s 12 seniors will be graduating on Friday, so Buteyn will give them the weekend off before refocusing on preparation for the state tournament.

Eden Prairie defeated Shakopee 7-3 in the Class 4A, Section 2 championship game at Eden Prairie High School Wednesday night, securing the Eagles a trip to the state tournament next week.

The Eagles (13-9) were the four-seed coming into the tournament, not favored to get this far, but they didn’t lose a game through the sectional.

Eden Prairie took an early lead, scoring two runs in the bottom of the first. It had the lead for all but one half-inning, as the Sabers scored three runs in the top of the third, thanks to runs batted in by Tom Keohen, Jack Sievers and Zack Henderson, to put the score at 3-2.

It didn’t take the Eagles long to respond, as they scored two runs in the bottom half of the third and never lost it from that point.

It was key for the lineup to score runs and retake the lead, but it was even more vital for Jack Zigan, Eden Prairie’s starter, to shut down the Sabers (14-11). Zigan gave up three hits and three runs, which all came in the third. Besides that inning, he cruised past Shakopee, striking out 11 batters.

He was pulled with two outs in the top of the seventh due to his pitch count. Ben Shepard came into the game and got the last out to secure the victory and a trip to state. 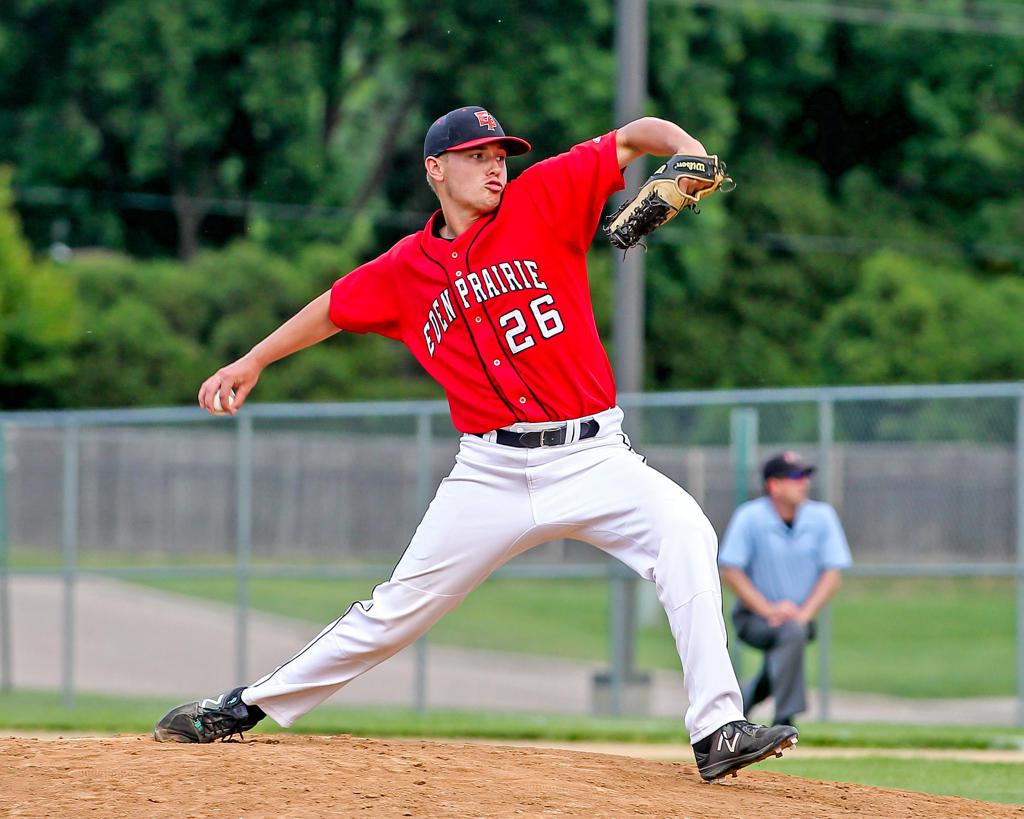 Jack Zigan pitched six and two-thirds innings to get the victory for Eden Prairie. Photo by Mark Hvidsten, SportsEngine