The Royals scored three runs in the fifth inning to break the 1-1 tie. 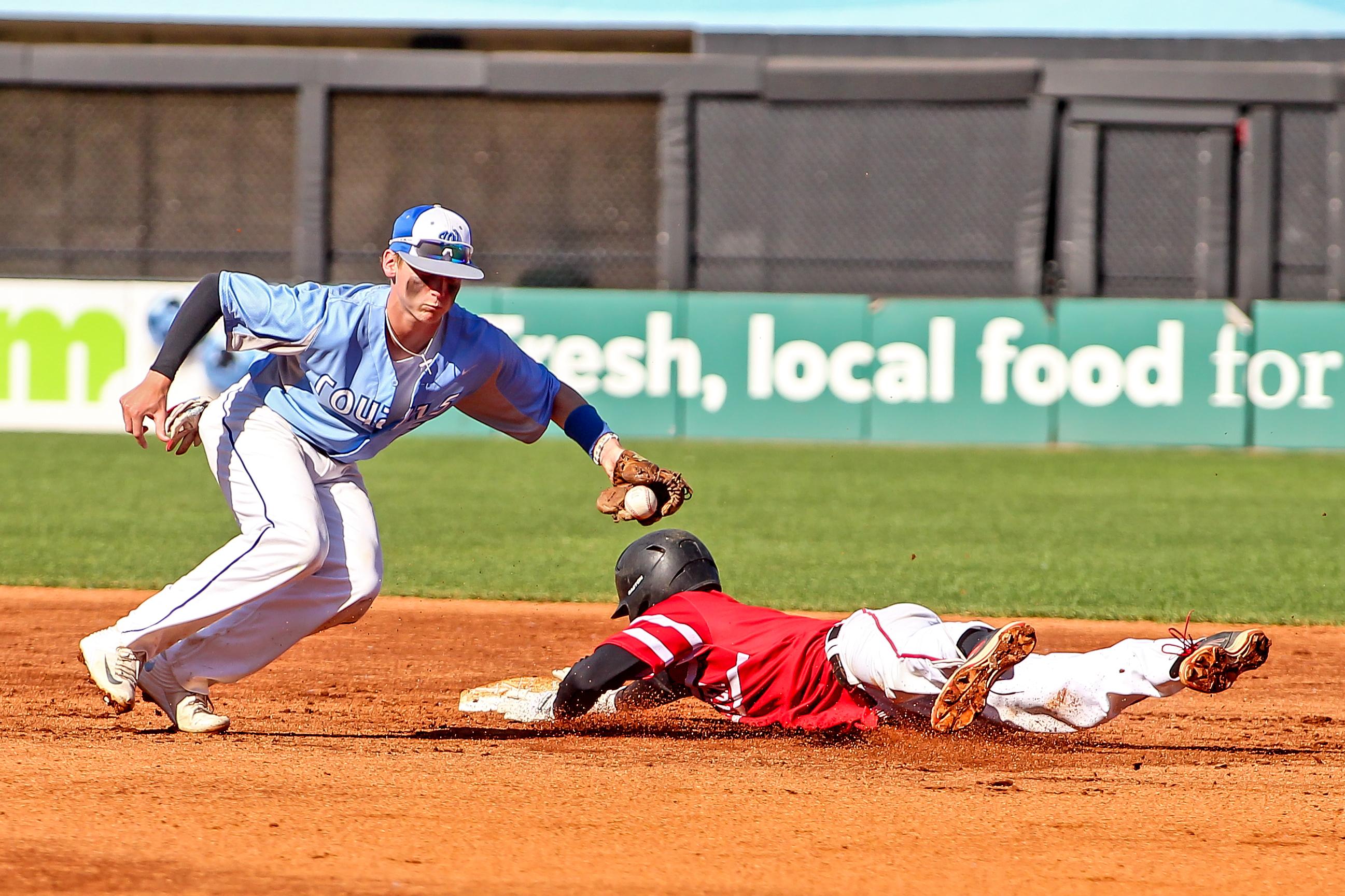 Woodbury shortstop can't quite get a handle on the ball as Stillwater's Ben Peterson slides safely into second. A fly ball ended the Stillwater threat and the inning and Woodbury went on to win 4-1. Photo by Mark Hvidsten, SportsEngine 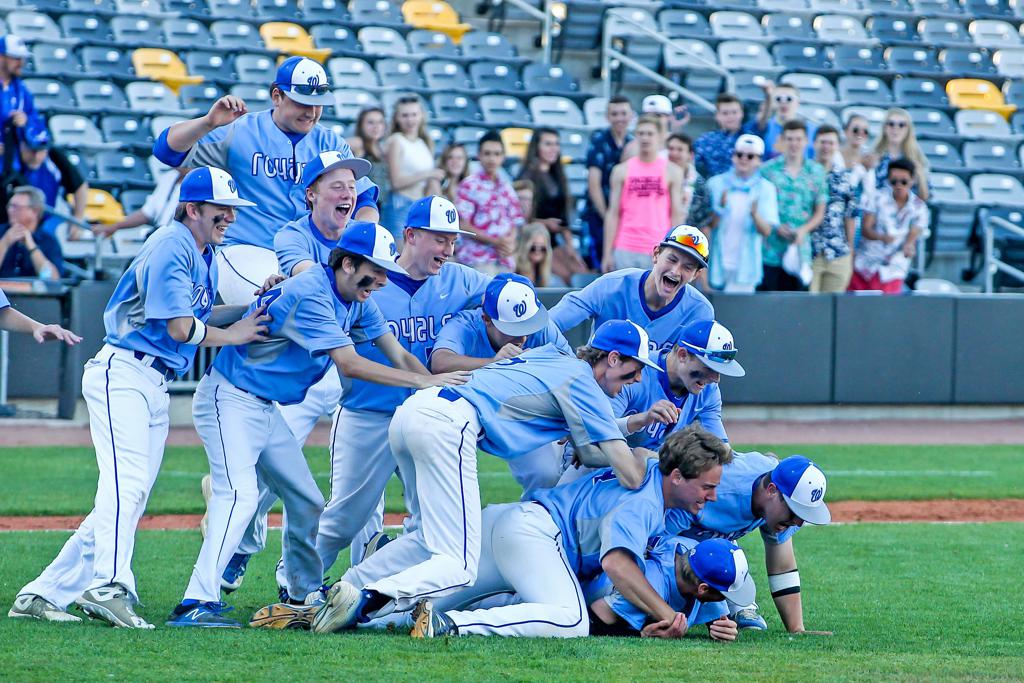 Woodbury came into Tuesday night’s game at CHS Field in St. Paul with a looming stereotype: it’s nearly impossible to beat a team three times in a row.

Add the playback images of the Ponies defeating the Royals 3-2 the first time they faced each other in April. Then add the fact that Stillwater is ranked No. 1 in the Class 4A Associated Press poll while Woodbury is unranked. Together, it seems like the perfect recipe for a widespread mental breakdown.

But the Royals played as if they were elementary-schoolers on summer break at a sandlot field. Even-keeled, relaxed and poised.

Woodbury (16-8) upset Stillwater (19-6) with room to breathe. The Royals walked into the dugout surrounded by buzzing bubble machines with a 4-1 victory and a nine-game winning streak under their belts. Oh, and a Class 4A, Section 4 title.

There was no single momentum-shifter, no rallier, no single player to point a finger at and hoist on the shoulders of a mosh pit at the end of the game. It was a defensive battle more than anything.

Senior Ronnie Sweeny played like he didn’t have nerves because -- well, he didn’t. He spent the day with his best friend, teammate Max Meyer, before enjoying a pregame meal at McDonald’s. During the game, Sweeny walked twice and scored a run. He also made a diving stop which put a screeching halt on the Ponies’ fifth-inning momentum.

“No nerves at all,” Sweeny said. “It’s just another game at a nicer facility with a bigger crowd.”

Junior Jack Horman was the opposite. He was a wreck all day, and his friends could tell. But when he stepped on the field, it was time for business. Horman hit a single which led to a bad throw to first base, an error, allowing two runners to make it home.

“I just wanted to get the ball in play,” Horman said. “I didn’t need to get a big hit.”

Coach Kevin McDermott knew his seven seniors would step up -- they wouldn’t let Tuesday’s game be their last.

The Royals did just that, as their patience at the plate allowed them to accept nine walks and make it on base 17 times. Meyer came in at the bottom of the fifth inning to finish the game, only allowing two batters on base and throwing three strikeouts.

Stillwater seniors Austin Murr and Graham Laubscher made it on base twice, each with a walk and a triple. Five other batters also made it to base for the Ponies.

The Royals look forward to next week’s state tournament, where they will make their second consecutive appearance.

Woodbury (16-8) moved its winning streak to nine games after a 4-1 upset over Stillwater (19-6) to claim the Class 4A, Section 4 crown at CHS Field in St. Paul on Tuesday night. The Ponies, who are ranked No. 1 in Class 4A in the Associated Press poll, suffered both of their section playoff losses at the hands of the Royals.

A fifth-inning momentum-shift spawned by an error, which allowed the Royals to plate two runs, proved fatal for the Ponies. Junior Brock Rinehart hit an RBI single shortly after, putting the Royals up by three to give them a lead they never surrendered.

But despite the fifth-inning offensive kick, the driving force behind the victory came from a heavy focus on defense. Junior Jack Horman and senior Ronnie Sweeny each made diving plays to stop a hit from making its way to the outfield. Pitcher Max Meyer came in at the bottom of the fifth inning and closed the game, only allowing two batters on base and throwing three strikeouts.

The Royals were patient at the plate. They made it to base 17 times -- nine of which were from walks. 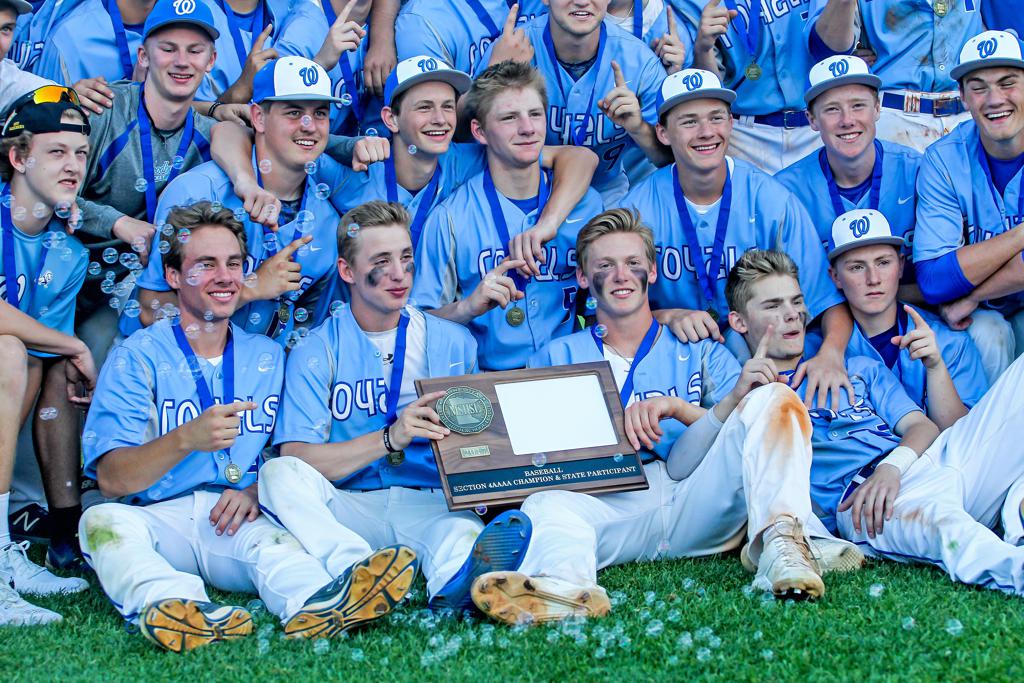 Jack Horman, first row and fourth from left, celebrates with teammates. Horman gave up one run over four innings pitched and put a ball in play in the fifth inning that scored two runs. Photo by Mark Hvidsten, SportsEngine