Prep baseball has a delightful day in Dundas 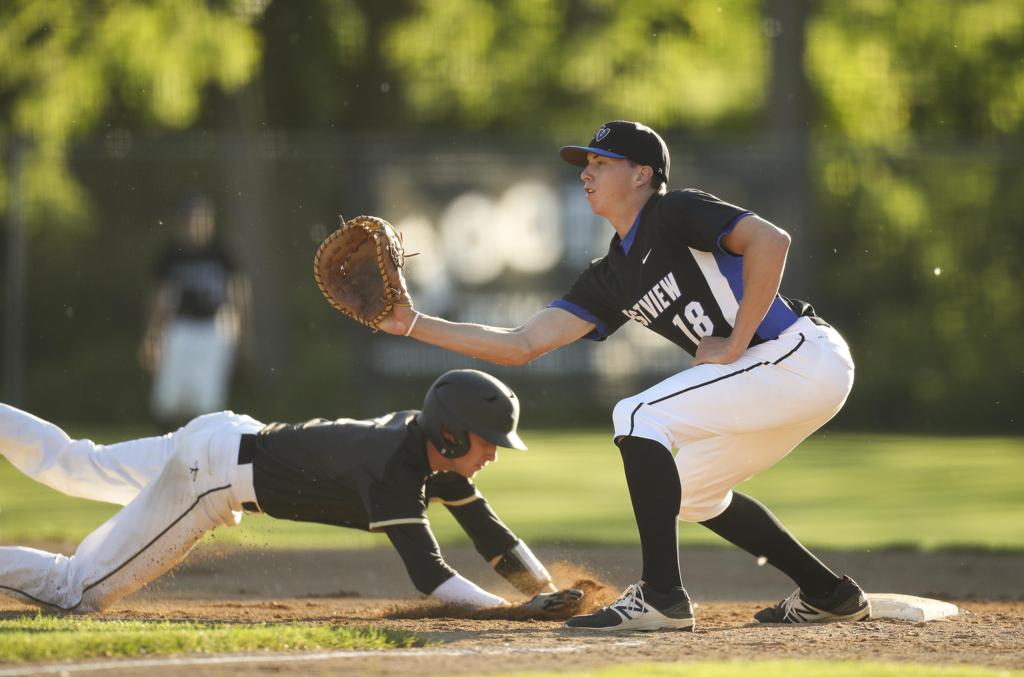 The Cannon River winds behind the outfield fence at Memorial Park in Dundas. You can periodically hear a train horn blare in the not-so-distant background.

The picturesque setting is ideal for watching baseball. It becomes even more special when eight teams converge on the site for the Class 4A, Section 3 tournament.

“The atmosphere is great, and we’re 40 miles from home,” said Rosemount senior pitcher/shortstop Griffin Lanoue, who will play next year at Xavier University in Cincinnati. “The crowd is really energetic.”

On Memorial Day, Lanoue and his teammates sat in the stands down the first base line, awaiting their second round winners’ bracket matchup with top-seeded Burnsville. The preceding losers’ bracket game between Apple Valley and Hastings was headed to extra innings.

“I watched 15 innings yesterday [Tampa Bay defeated the Twins 8-6], I can watch 15 again today,” said a Hastings student standing near the Raiders’ dugout.

It didn’t take nearly that long as Apple Valley scored a run in the bottom of the 10th inning for a 2-1 victory. Then a three-member grounds crew quickly scurried into action, one at home plate, one on the pitching mound and the other dragging the infield.

A brief shower moved in, but that didn’t deter the start time of the third game. It only dampened the spirit of fans of the losing teams in the first two games who still were hanging around the diamond even though their squads have been eliminated.

Engdahl and his graduating class would know. The group earned their first section victory when the Irish defeated Park of Cottage Grove 3-1 in the opening round.

The last time the Irish won a first-round game was 2013, when they defeated Simley 3-2. Rosemount coach Chris Swansson and his players had not won a second-round game since he took over the program in 2010.

“It’s not like I’m going to out-coach somebody in the section,” Swansson said with a smirk, followed by laughter.

This day appeared headed down that usual Irish path. Burnsville, ranked No. 6 by Let’s Play Baseball, led 1-0 after five innings, taking advantage of two Irish errors for its lone run.

“All plays at this time of the year are magnified,” Swansson said.

What transpired in the top of the sixth epitomizes what makes baseball America’s game.

The Irish scored six times on their way a 6-1 victory, with the runs coming with a flair as fresh popcorn popped in the concession stand near their first base dugout.

Senior Ryan Lemke’s double knocked in the tying run, sending classmate Dan Johnson into celebration mode. Johnson tried to rush out of the dugout to congratulate Lemke — who was being replaced by pinch runner Brad Heimkes — only to hit his head on the concrete and be sent backpedaling.

“I thought he was going to take out the dugout,” Swansson said.

Heimkes then raced home on an error for the go-ahead run, stumbling short of the plate and crawling the final 10 feet.

“He was running so fast his legs couldn’t keep up,” Swansson said. “We were all laughing pretty hard.”

“This is the biggest win I’ve ever been a part of,” Lanoue said. “Baseball is very humbling game.”