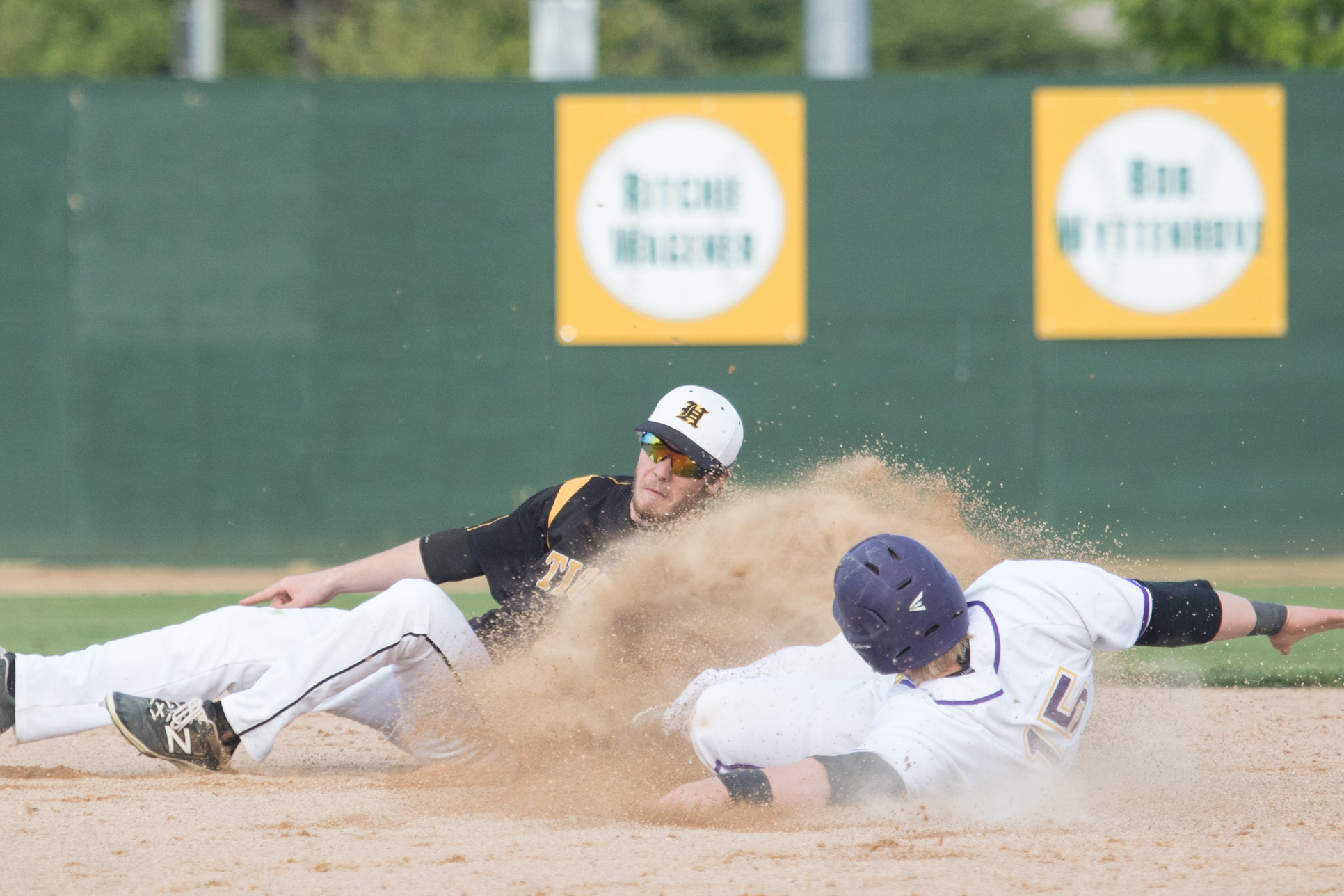 Waconia senior Jacob Hendricks slides into second base as Hutchinson's Mitchell Reiner dives to make the tag. Hendricks was out, but the Wildcats prevailed 5-0 over the Tigers on Thursday at Lions Field in Waconia. Photo by Jeff Lawler, SportsEngine

The win kept Waconia’s unbeaten record intact (19-0), but the senior said his team is playing under no pressure.

“Our whole team, we’ve always been at our best when we play loose and fun, just playing the game,” Hendricks said. “That’s how we’ve always done it since we were little. That’s the way we will continue to play if we want to win.”

Hendricks was 3-for-3 at the plate against Hutchinson, including an inside-the-park home run in the second inning. The chance to make it home was created from an error, but Hendricks’ effort to capitalize made it a three-run play that put the Wildcats ahead 5-0.

Waconia coach Mark Grundhofer said Hendricks has been a key player on the roster this season and is hitting the ball well at the right time.

“Jake’s on fire right now,” Grundhofer said. “I remember him when he was 10 years old, coming to hitting clinics, and I’m like, ‘That kid's got a nice swing,’ and he still does.”

Besides the senior’s ability to hit the ball, Hendricks has improved defensively and is making plays for his team on both sides of the ball, Grundhofer said.

Hendricks said the play of the entire defensive unit makes things easier for everyone in their individual roles, but his coach noticed the third baseman had made strides since last season.

"He played third for us last year and struggled at times,” Grundhofer said. “His defense (this year) has been phenomenal.”

“They got good hitters stacked up and down their lineup,” Renning said. “They swing with authority.”

They also came through in the clutch, as every Waconia run was scored with two outs and nobody on base.

Renning said Hutchinson made key mistakes that resulted in the team trailing early in the game.

“We gotta compete, that’s the biggest thing, compete on every single pitch,” Renning said. “[Our team] just has to believe and get back in that competing stage that we were.”

Grundhofer hopes Hendricks and the rest of the Wildcats continue playing at a high level. He said this kind of season isn’t normal. 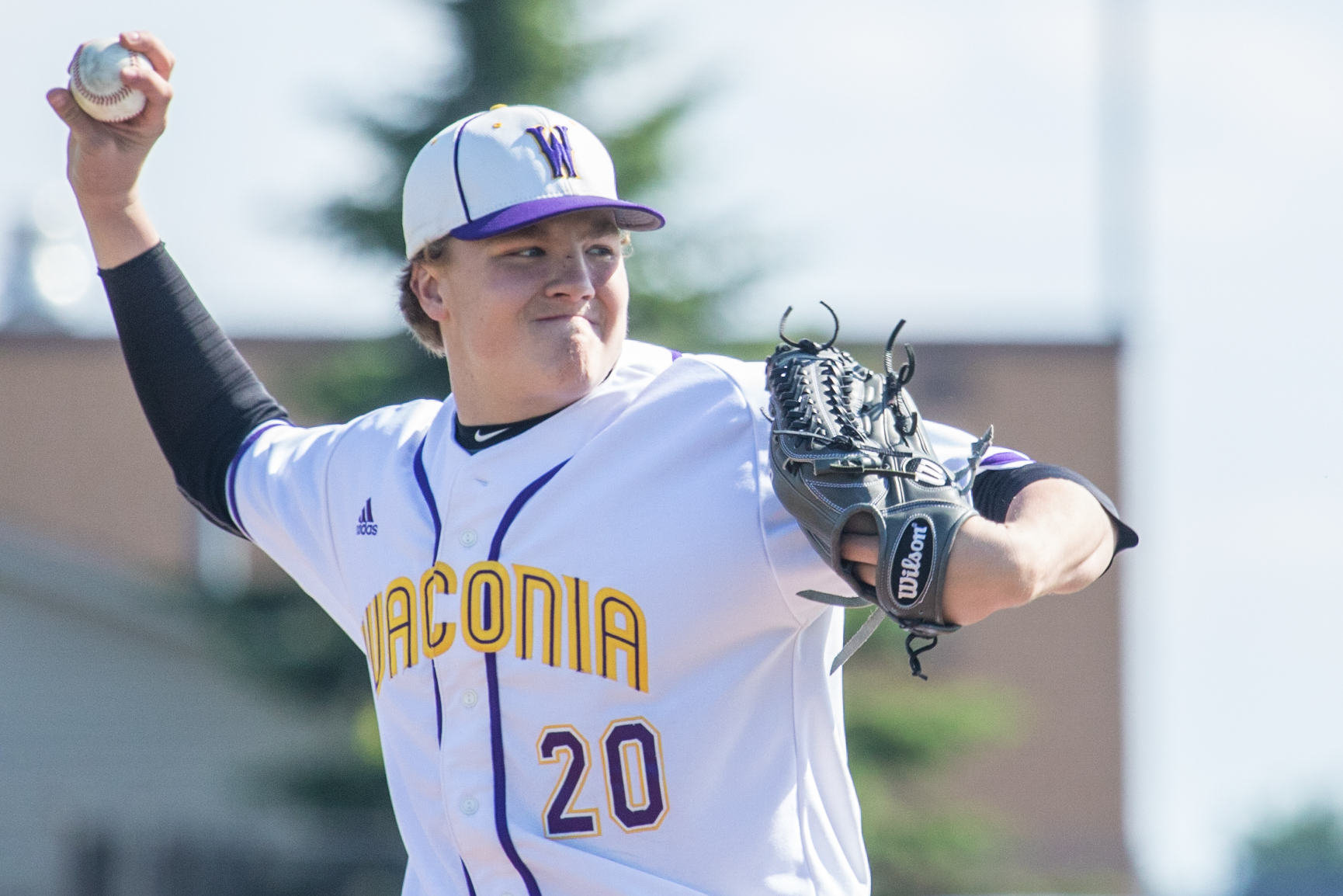 Waconia senior Dillon Whittaker gave up two hits and no runs over five innings against Hutchinson on Thursday at Lions Field in Waconia. The Wildcats defeated the Tigers 5-0 in a Wright County East Conference matchup. Photo by Jeff Lawler, SportsEngine

Waconia scored five runs in the opening two innings and went on to record a 5-0 home victory over Hutchinson on Thursday, capping an undefeated regular season for the Wildcats (19-0, 10-0).

With two on base in the second inning, Jacob Hendricks hit an inside-the-park home run to score more three runs for the Wildcats, ranked No. 2 in the coaches' Class 3A poll.

Both sides went scoreless for the remainder of the game. Waconia loaded the bases multiple times, but couldn’t extend the lead.

The Wildcats finished with eight hits, while Travis Trettin and Daniel Lyons had two of the three hits for the Tigers (11-8, 9-3), who lost to their Wright County Conference East Division rival for the second time in nine days. Hutchinson fell at home 8-2 on May 16. 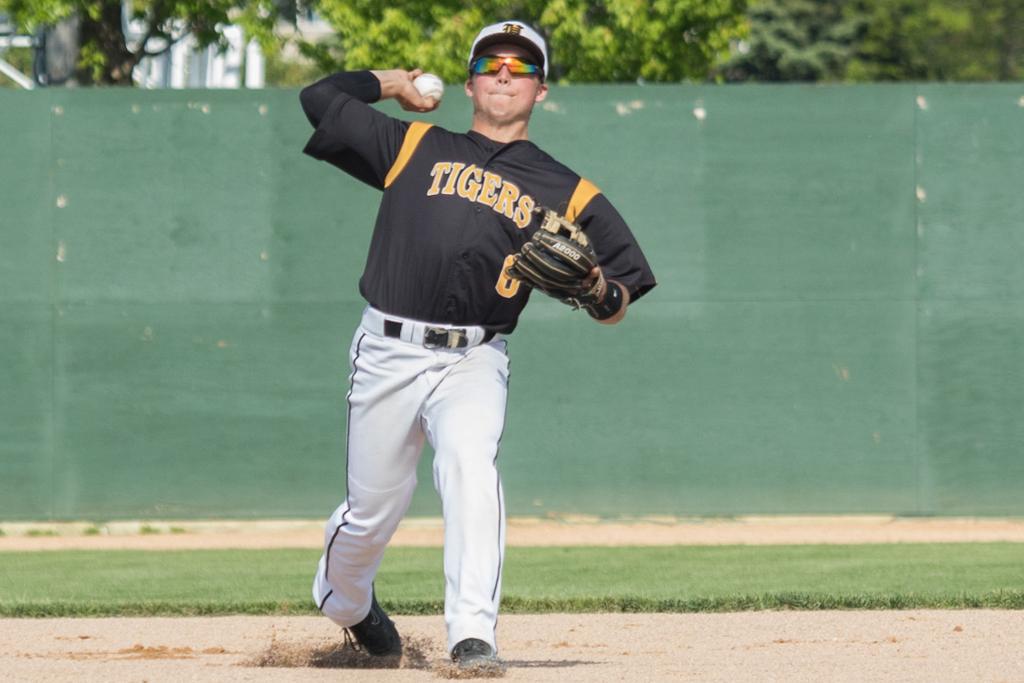 Hutchinson senior Travis Trettin makes the throw from shortstop for the out against Waconia on Thursday in Waconia. The Tigers were defeated by the Wildcats 5-0 at Lions Field. Photo by Jeff Lawler, SportsEngine