Stillwater overtakes Wayzata for No. 1 spot in Class 4A state rankings 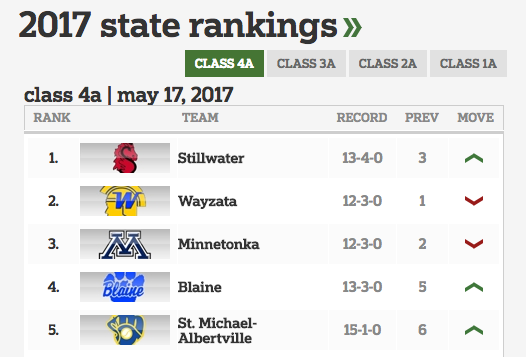 Every single team has a new spot in the coaches' Class 4A rankings this week.

Last week wasn’t all bad for the Rangers. Despite the loss to Stillwater, the Rangers defeated former Wayzata 4-2 last Saturday, knocking the Trojans to No. 2 in the rankings.

Minnetonka fell to No. 3, while No. 4 Blaine and No. 5 St. Michael-Albertville each moved up one place.

Bemidji remained at No. 3, and New Ulm dropped one place to No. 5.

The top three teams in Class 2A stayed put, but two new ones joined the top 10.

Pine Island (13-4-0) is the new No. 9, jumping up from No. 11. The Panthers lost one of their two games last Saturday against Rochester Lourdes (12-5-0), but they had won seven consecutive up to that point.

Rochester Lourdes also benefited from the doubleheader split with Pine Island, climbing six spots to No. 10. The Eagles have won six of their last seven games.

Sauk Centre moved from No. 10 to No. 4 and Jackson County Central held steady at No. 5.

The shuffling continued in Class 1A, as all but two teams changed spots, including two that landed inside the top 10 after being outside a week ago.

No team had a bigger jump than Granada-Huntley-East Chain/Martin Luther/Truman (11-3-0), as it moved up 10 spots. The Mustangs are No. 8 because of a 10-game winning streak. The last time they lost a game was April 13.

Fosston secured the No. 10 ranking after being No. 11 last week.

Parker's Prairie held the No. 1 spot, while No. 2 BOLD and No. 3 Legacy Christian swapped places. Springfield climbed two positions to No. 6 and Mankato Loyola dropped one to No. 5