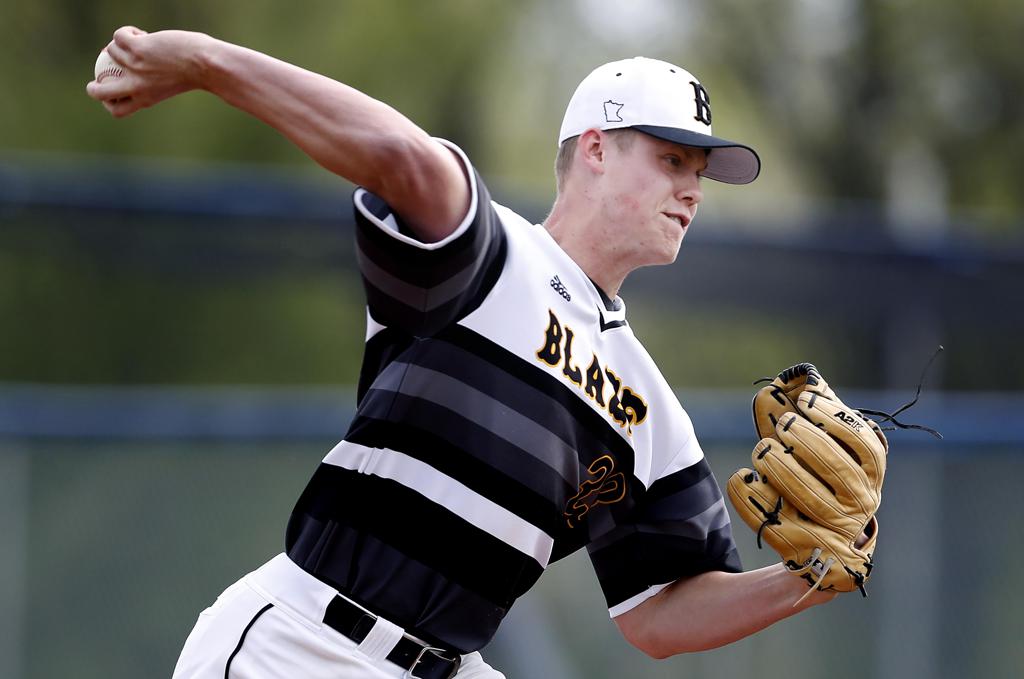 Burnsville's Sam Carlson, a University of Florida recruit and the state’s top draft prospect, is one of many top pitchers affected by new pitch-count rules in Minnesota high school baseball. ] CARLOS GONZALEZ � cgonzalez@startribune.com - May 8, 20

University of Florida coach Kevin O’Sullivan and Major League Baseball scouts armed with radar guns were gathered throughout the fans in the stands behind home plate. They were focused on Burnsville pitcher Sam Carlson, a Gators recruit and the state’s top draft prospect.

Carlson impressed, overpowering hitters with his 90-mph-plus fastball. He pitched four-no-hit innings before leaving the game after five innings with a 2-1 lead over Rosemount in a key South Suburban Conference game. He allowed two hits, struck out six and walked two in a 71-pitch performance.

“He was very good, and had all three pitches [fastball, slider and changeup] working,” Burnsville coach Mick Scholl said. “I’m not going to sacrifice the health of a kid’s arm for a win.”

What transpired next has been plaguing coaches around the state in all four classes as they keep a close watch on their pitchers’ arms in the initial season of new pitch-count rules: The Irish rallied for three runs in the seventh inning against the Blaze bullpen, pulling out a 4-2 victory.

The guidelines, approved by the Minnesota State High School League, set limits on the number of pitches thrown that correspond with days of rest. The surprising implications this season go beyond losing leads and games. Some coaches are now seeking to develop closers to fill the innings gap. Others are having their hitters take pitches to run up the pitch count. Teams with a dearth of starting pitching are struggling as weather cancellations create scheduling logjams. At least one team plans to trim its schedule next year to relieve the pitching pressure.

“Having a starting pitcher pulled is a momentum changer,” Shakopee coach Tom Schleper said. “It’s a sense of accomplishment. The momentum quickly swings to the other team.”

Mayer Lutheran led Sibley East 2-1 in the top of the seventh inning of a recent Minnesota River Conference matchup when team ace Nic Voelker reached the maximum one-day pitch count of 105. Coach Dave Lane went to his bullpen with two men on and one out. Sibley East proceeded to score five runs and then held on for a 6-5 victory, despite its top pitcher having to leave for pitch-count reasons in the seventh inning, too.

A week later, the Crusaders had a 3-1 lead in the seventh when their starter had to be pulled once again. They wound up giving up four runs and lost 5-4.

“It’s frustrating when you lose a game when you have to pull out a pitcher,’’ Lane said, “and it has bit us in the shorts twice.”

Coaches already have started taking a hard look at developing closers. In the past, another starter for most teams filled that role on his off days.

“I’ve been a starter until this year where I’ve moved more into a closer’s role. The shut-down guy,” Blaine junior Seth Miller said. “We’re now more like a major league system. They trust me to shut the game down, and get the win.”

Miller is 4-for-4 in save opportunities for the Bengals. He already is second on the school’s career save list.

“We talked as a coaching staff at the start of the season that we wanted to make sure we gave our late-inning guys a chance to pitch without being in trouble. Meaning, we wanted them to able to start an inning if at all possible,” Blaine coach Eric Feigum said. “That has resulted in a lot of times taking our starter out after five innings even if they’re not at the pitch-count limit. Seth has been the guy we have counted on to finish games for us.”

Miller, who also has a win in relief, has made two starts when the Bengals’ weekly game schedule has been expanded due to weather.

“My pitch counts have really fluctuated,” Miller said. He has thrown 75 and 85 pitches as a starter and as few as 11 while shutting down Duluth East for an inning.

“The adrenaline is really pumping as a closer,” Miller said. “You have to be able to get out of situations with guys on base, and a one-run lead. When you get through it though, the reward is awfully fulfilling.”

St. Paul Harding coach Mike Zamacona knew his squad was going to struggle this year. The pitch-count rule has compounded it.

The Knights (0-13) have only 11 players, five of whom are pitchers, on their varsity roster and an additional 15 at the junior varsity level. Their top pitcher, senior William Tzavaras, is headed for Division III Hamline.

“A lot of our players haven’t played baseball before and are playing for the first time,” Zamacona said. “All of my pitchers are in the game, so we have to get them warmed up while we’re batting. That’s a challenge in itself.”

Not to mention playing three or four games in a week. The Knights have played five games in a seven-day span.

“Four games in a week is really tough for us,” Zamacona said.

Those kind of predicaments made Zamacona take a look at the future, too. The Knights, who are a Class 3A school, will go from an 18-game schedule to 14 next season.

“You never want to see that happen because it could kill a program,” Scholl said. “You don’t want to take the opportunity to play away from the kids. That’s disheartening.”

Mac Horvath of Class 4A Rochester Century was on the verge of pitching back-to-back no-hitters, a feat not too many freshman have the chance to accomplish, only to be denied due to the pitch-count limit.

Horvath blanked Northfield 5-0 on April 21. He struck out five and walked three while throwing 89 pitches.

Weather then played havoc with the Panthers’ schedule, and Horvath didn’t get his next start until May 2, a 1-0 victory over Owatonna. He no-hit the Huskies for 6 ⅓ innings with 11 strikeouts and six walks before reaching the maximum pitch count of 105, and being forced to exit.

“That was tough, especially after he threw the first one,” Panthers coach Vinnie Mannese said of Horvath, who had a streak of 18 consecutive hitless innings “You want to give him the opportunity to finish it.”

Palmer Mickelson came on in relief to get the final two outs, throwing only four pitches.

One problem that concerned coaches before the season — the tracking of pitches and recording the data on the high school league website— has mostly been a nonissue.

“I thought that was going to be more of a pain,’’ Lane said, “but it’s actually been pretty easy.”

There were only three violations of the rules at the varsity level through the second week of May. Two were unintentional errors for recording the wrong number of pitches for a player on the league website. The other was for a team’s scorekeeper failing to tell the coach their hurler had reached the maximum number of pitches.

“There’s a lot of room for errors when you have over 1,000 games,” said Kevin Merkle, high school league associate director. “I’ve been really pleased at how cooperative the coaches have been.”

Scholl hopes others take notice and do the right thing at the lower levels.

“Hopefully, traveling and club teams look at what we’re doing,” Scholl said. “A pitch count needs to be implemented at those levels, too.’’