Drew Gilbert hit a walk-off double to secure the Ponies' 4-3 victory over the Rangers. 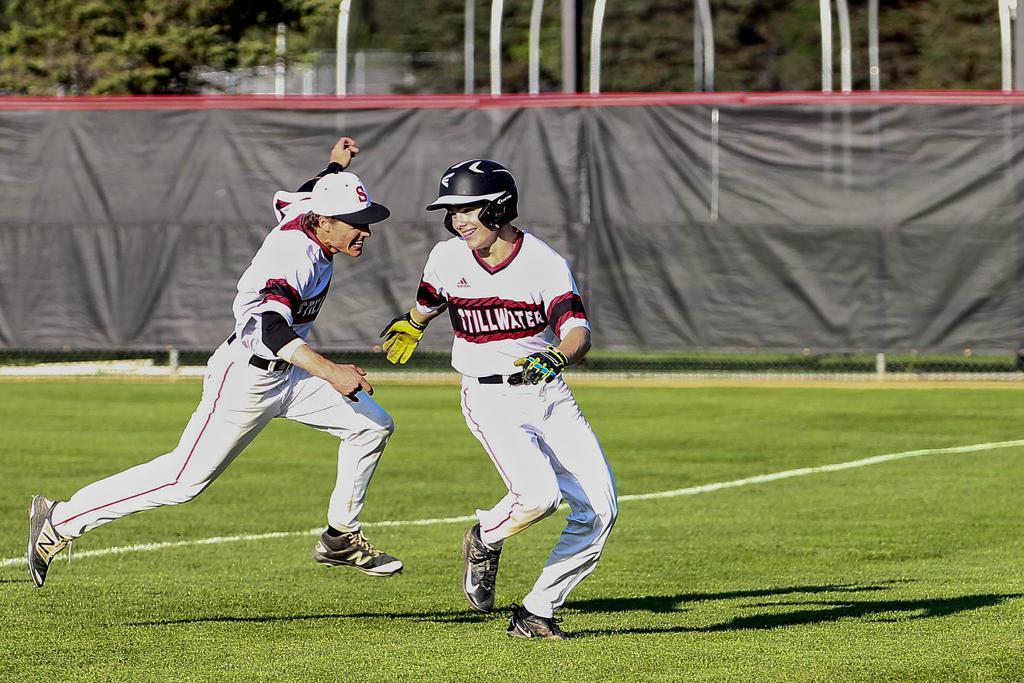 Stillwater's Matt McGinley, left, chases down teammate Drew Gilbert in celebration of Gilbert's double in the bottom of the eighth inning that lifted the Ponies to a 4-3 victory over Forest Lake. Photo by Mark Hvidsten, SportsEngine 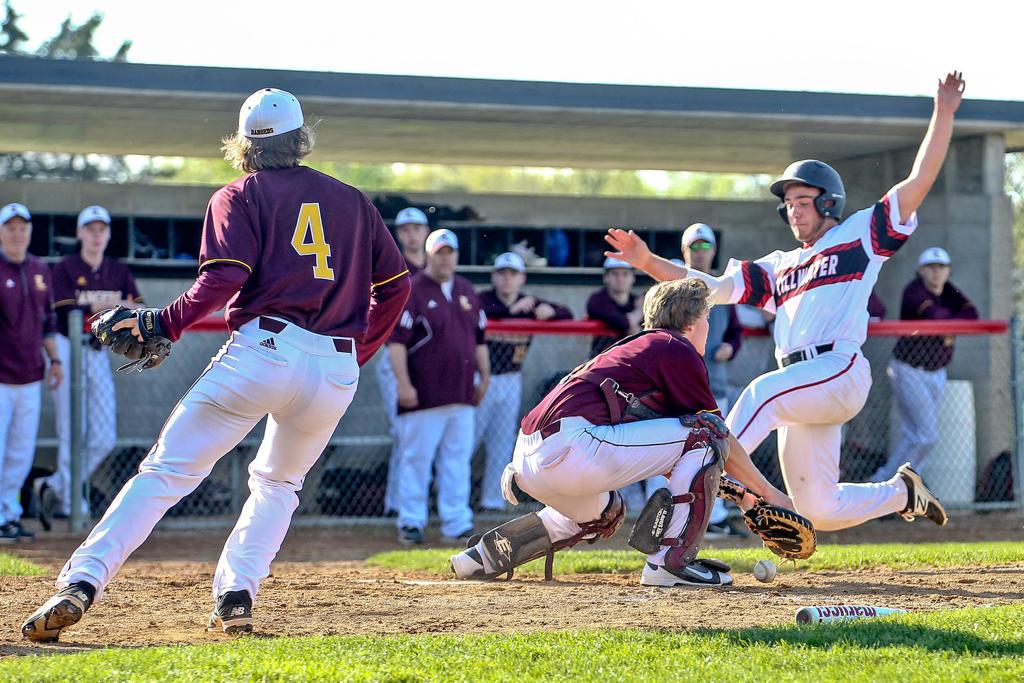 Forest Lake catcher Ian Walker fields the throw as Stillwater's Matt Crowell slides in with a go-ahead run in the bottom of the sixth inning. Forest Lake scored in the seventh to send the game to extra innings. Photo by Mark Hvidsten, SportsEngine

Like sunflower seeds and second-guessing umpires, chatter is a time-honored tradition on the baseball diamond, and nobody does it better than the Stillwater Ponies.

From the first pitch to the last at-bat, the Ponies can be heard on the bench and in the field, encouraging one another and letting their oft-nonsensical jabbering soften the resolve of opponents.

“When we’re down, we’re obviously not going to talk as much,” sophomore Drew Gilbert said after Wednesday afternoon’s game against Forest Lake.

“But when we’re up, we’re going to try and rattle the other team, try to get in their heads,” Gilbert added.

Stillwater coach Mike Parker said that he’s not always thrilled with the bench’s commentary, which is harmless and ranges from “we’re having fun” to an animated version of the Mortal Kombat phrase “finish him,” but it’s a quirk of this team that is essential to its success.

“One of the things I’ve learned is to just let ‘em go, and be a little looser than what I’m used to,” Parker admitted. “It keeps them in the game.”

The Ponies, who are ranked No.4 in Class 4A in the Let’s Play Baseball rankings, weren’t up for long, but they were up when it counted on Wednesday, as Gilbert drove in the game-winner in the bottom of the eighth to lift the Ponies to a 4-3 victory over the Suburban East Conference rival Rangers.

“He never gets cheated on his swings,” Parker said of Gilbert. “He’s had two game-winning hits for us, and it’s fun to see our seniors really starting to trust our sophomores,” Parker continued, adding that Gilbert and fellow sophomore Will Frisch have requisite talent to be relied upon late in games.

Gilbert also picked up the win on the mound, relieving senior Graham Laubscher in the top of the seventh after Laubscher surrendered just six hits and went toe-to-toe with Forest Lake starter Cameron Kline for six frames.

"They're a good team," Laubscher said of the Rangers, whom the Ponies battled to a 2-0 victory on April 20. "We've always had to play well to beat them, and we luckily came out (on top) this time."

Senior Phil Daniels drove in two runs for the Ponies, ranked No. 4 in Class 4A by Let's Play Baseball, tying the game at 2-2 in the bottom of the fifth and sparking the comeback.

Junior Mason Schwerzler also drove in a run for the Ponies (12-2, 10-2), and Gilbert took the win on the mound in relief.

Senior pitcher Cameron Kline tossed seven strong innings for the No. 8-4A Rangers, striking out nine while fellow senior Tyler Boesel drove in a pair of runs in the loss.