The Raptors scored two runs in the sixth inning to defeat the Eagles 2-1. 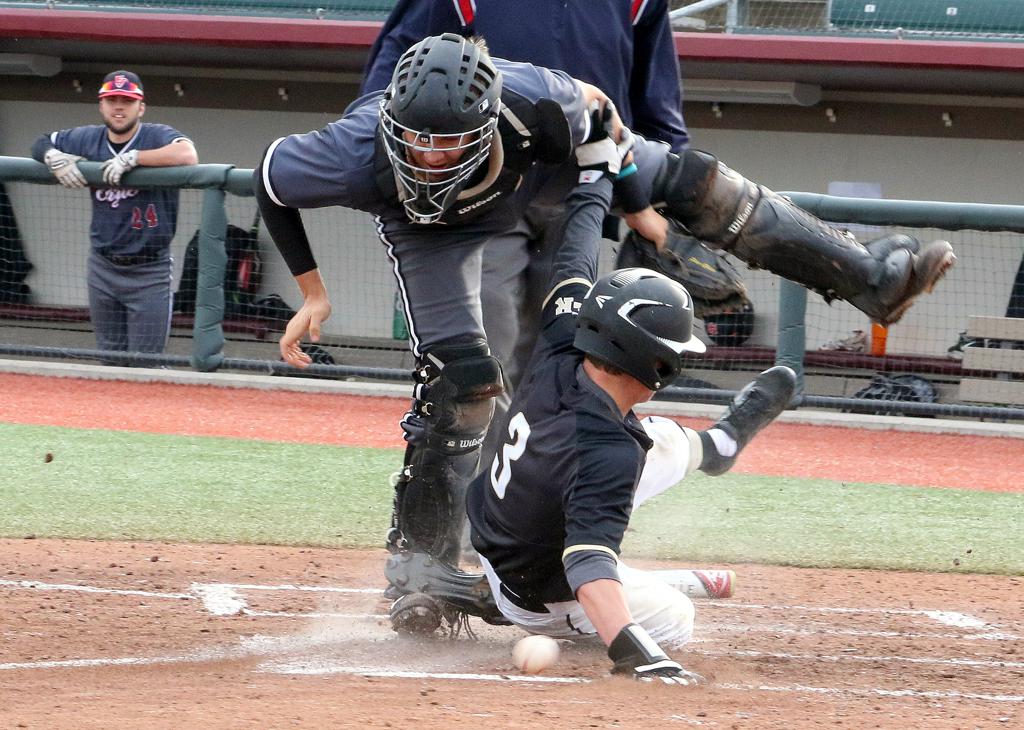 East Ridge's Brendan McKevitt slides home with the game-winning run in the sixth inning as Eden Prairie catcher Ryan Wrobleski can't get to the ball. The Raptors won 2-1. Photo by John Molene, SpotsEngine 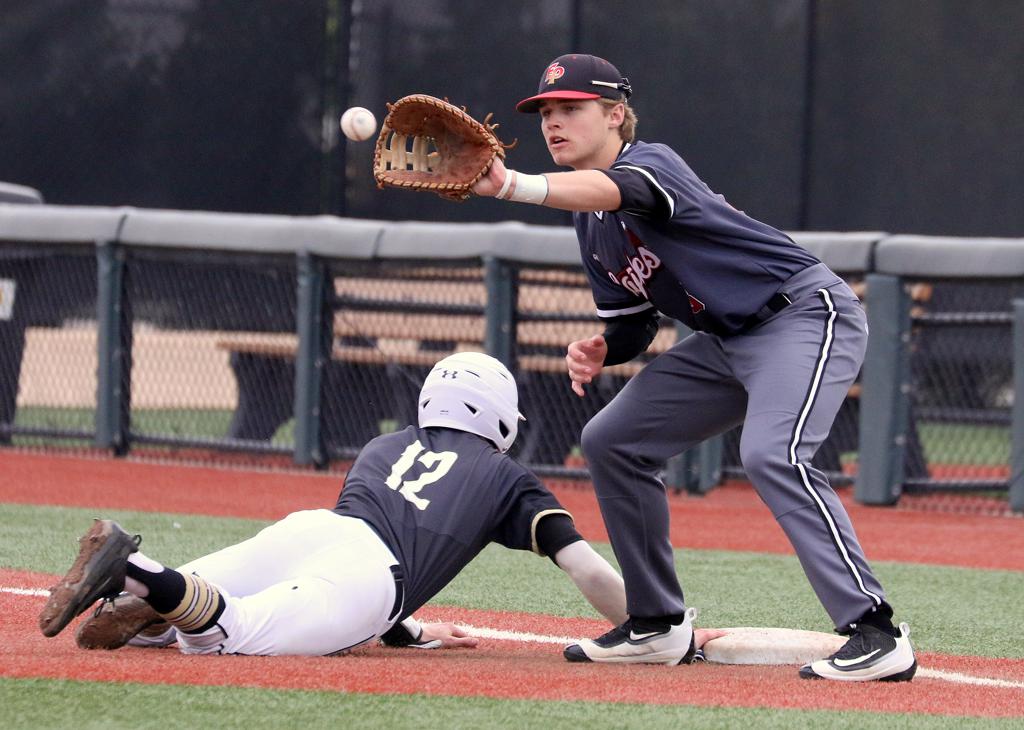 An East Ridge base runner dives back to first as the throw comes in to Eden Prairie first baseman Matthew Dolan. Photo by John Molene, SportsEngine

With the threat of rain looming over Siebert Field, Eden Prairie and East Ridge had to make a decision. Could they get Friday afternoon’s scheduled game in before the skies burst? The evening forecast was foreboding. Neither side wanted to start a game they would not be able to complete.

Ultimately, the coaches decided to begin the contest 15 minutes early, at 4:15 p.m. Not only were the Eagles and Raptors able to play Friday’s matchup to completion, the game’s seven innings were played in under two hours.

Pitching ruled the day. And the early spring droplets spattered the players as if the baseball gods were issuing an warning: if you dawdle, you’ll regret it.

East Ridge (3-1, 2-1) came away from Friday’s contest regretting nothing. The Raptors pieced together a two-run rally in the sixth inning and snatched a victory away from the Eagles, winning by a count of 2-1.

The Raptors’ pitching held Eden Prairie (1-2, 0-1), ranked No. 5 in Class 4A in the Associated Press poll, to two hits and one unearned run. Both hits came in the first inning. Sophomores Graham Metten and Ian Thomas allowed just two hits and two walks between them while striking out eight.

Six of those Ks belong to Metten, who tossed the game’s first five frames. Not only was Friday a statement game for the sophomore, it was his first ever varsity appearance.

“I felt good warming up,” Metten said. “My breaking ball wasn’t super sharp today so I had to rely on my changeup more than my curveball. I had to figure out a way to get it done.”

“He’s a competitor. He’s got good stuff. He’s young and he’s learning. He’s not afraid to step out there. You’d never know he hadn’t pitched before,” Sprout said.

Offensively, the hero was right fielder Kyle Koken. His two-run single in the sixth inning gave East Ridge the lead.

After Brandon Petrie reached base on a throwing error to begin the sixth, Brendan McKevitt followed with a bunt single up the first base line. Ty Okada sacrificed the runners to second and third, and after Cam Hunter walked to load the bases, Koken stepped to the plate.

With one out, Koken’s goal was to hit the ball hard somewhere. A productive out would have tied the game. Instead, he ripped a breaking ball over the pitcher’s mound and into centerfield for a base hit.

“I knew the bases were loaded and I had to do a job for the team. I knew we were down one. Just put the ball in play and good things happen. I like to hit fastballs but I sat back on his curveball and eventually got into one,” Koken said

The sixth inning was the first real opportunity the Raptors had to break through. Eden Prairie lefty Torben Udahl had stymied the East Ridge bats through the first five innings. He went for 5.1 innings, surrendering four hits and striking out five. But two of those hits and none of those strikeouts occurred in the decisive sixth.

While it was not East Ridge’s most productive showing, it got clutch plays when it needed them -- on all sides of the baseball.

“I think what we’ve done all week long is we’ve pitched really well. We’re throwing strikes and we’ve been playing defense. It’s kept us in every single ballgame,” Sprout said.

Eden Prairie scratched its run across in the fifth inning. Grant Randle and Mike Espe reached on back-to-back throwing errors, then Will Pahl brought home Randle with a sacrifice fly into center field.

The way Udahl was throwing, it appeared the 1-0 lead might hold up.

“Early in the game, we could have had better at-bats and put some pressure on [Udahl],”  Sprout said. “But we started to have good at-bats. We got on base and from there, we got our bunts down. That’s playing small ball, getting guys over and waiting for that next big hit, which Koken did for us.”

Sprout said the Raptors’ small ball prowess was no coincidence.

“We work hard at bunting, we really do,” he said. “Come to our practice any day and you’ll see we’re working on it.”

East Ridge is also working on carving out a spot as one of the top teams in Class 4A. So far its shut out Chaska 7-0 and played a competitive contest against defending state champion Wayzata. Friday’s win against a top-ranked opponent showed that East Ridge is for real.

"We're trying to show people we're one of the best teams in the state," Koken said. "I know we are."

East Ridge plated a pair of runs in the sixth inning and came from behind to defeat Eden Prairie 2-1 at Siebert Field on Friday.

A two-run single by Kyle Koken provided the decisive blow. With the bases loaded and one out in the sixth, Koken punched a sharp ground ball back up the middle, bringing home Brandon Petrie and Brendan McKevitt with the tying and go-ahead runs.

Until that point, Eagles left-hander Torben Urdahl had been throwing a shutout. He left the game after 5.1 innings, having allowed two runs (one earned) with four hits, five strikeouts and one walk.

But Raptors sophomore Graham Metten was just as effective, allowing just two hits and one unearned run while striking out six in five innings of work.

Eden Prairie (1-2, 0-1) scored its run when back-to-back Raptor fielding errors placed runners on the corners in the fifth. Subsequently, Will Pahl brought home the game’s first run with a sacrifice fly to center.

Eden Prairie, ranked No. 5 in Class 4A in the Associated Press poll, recorded both of its hits in the first inning.

Noah Thomas hurled two perfect innings of relief to earn the win for East Ridge (3-1, 2-1). Urdahl took the loss for the Eagles. 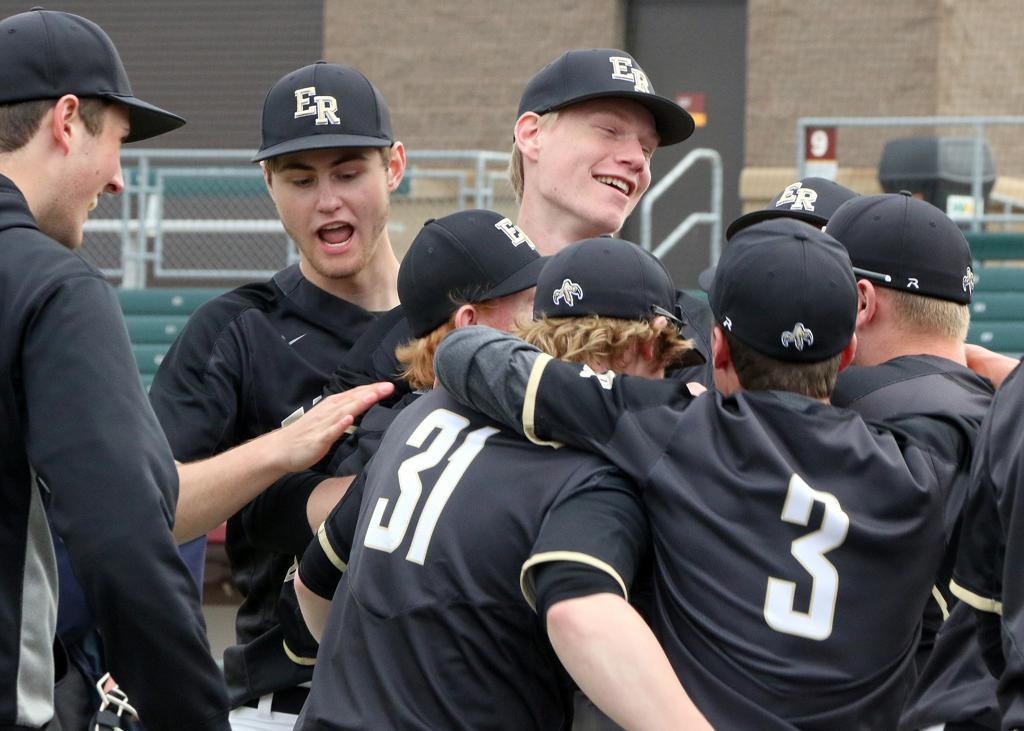