The Skippers' offense fueled the team to a 12-2 victory over the Elks. 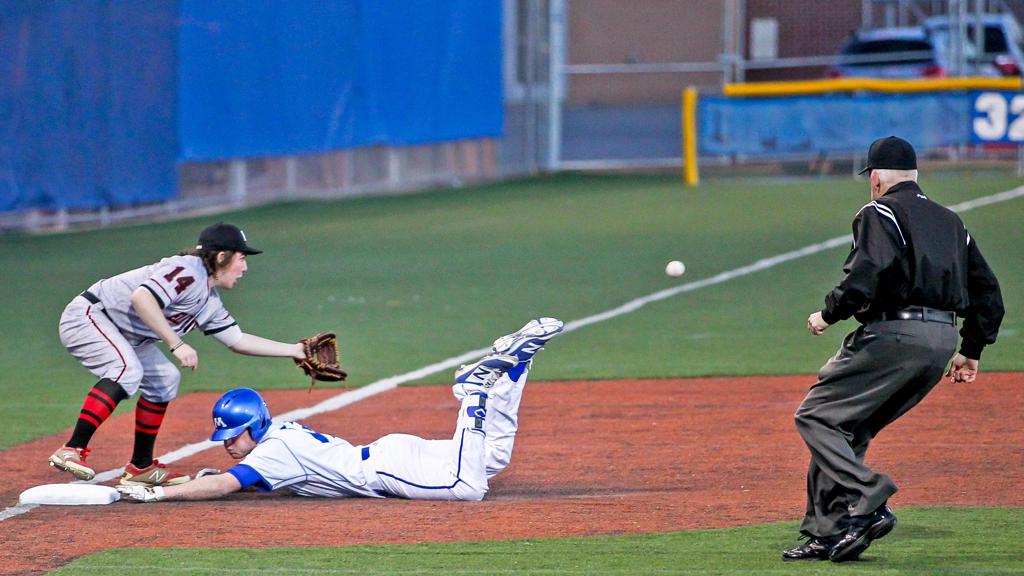 Minnetonka's Joel Thimsen slides safely into third with an RBI triple that gave the Skippers a 4-2 lead over Elk River in the fourth inning. Minnetonka won 12-2 in six innings. Photo by Mark Hvidsten, SportsEngine 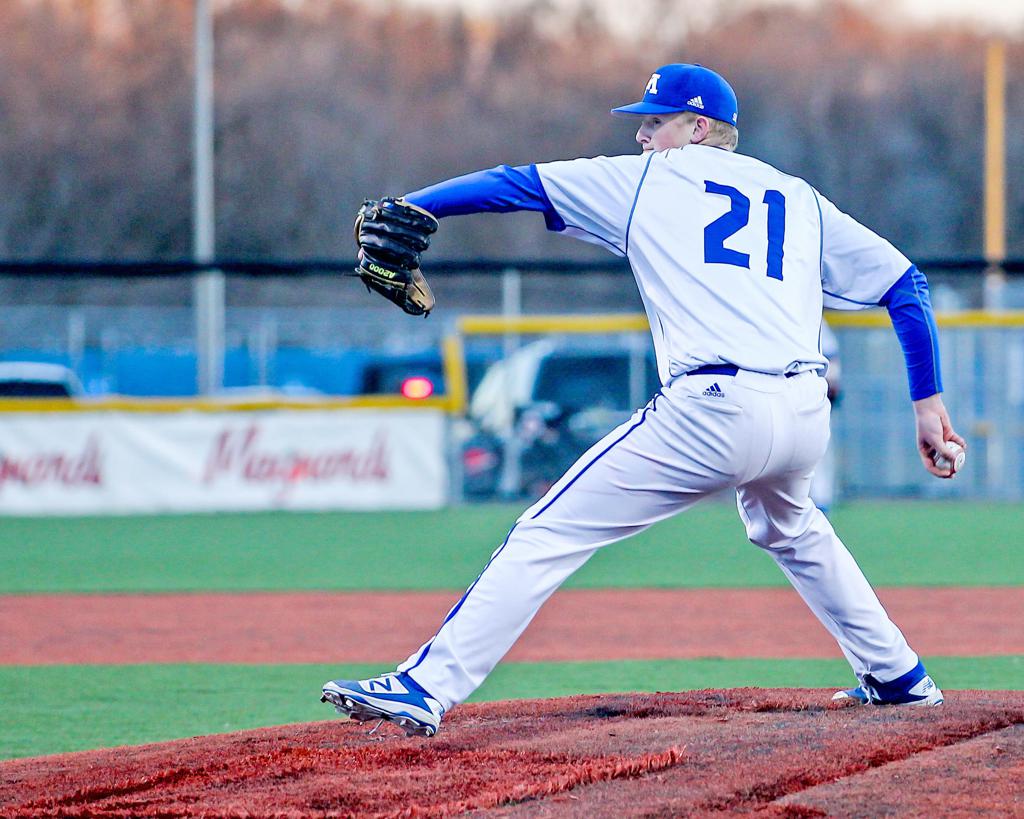 Minnetonka starter Sam Thoresen struck out seven and walked two in five innings to pick up the victory. Photo by Mark Hvidsten, SportsEngine


A sixth inning outburst in which Minnetonka scored seven runs carried the Skippers (1-0) to an opening day win over visiting Elk River. Minnetonka downed the Elks (0-1) 12-2 in six innings on Thursday at Veterans Field in Minnetonka.

Senior Sam Thoresen, a Minnesota commit, twirled five innings for the Skippers en route to the win. The righthander allowed a pair of runs on five hits while striking out seven and walking just two.

Thoresen suggested his outing started a little rough, but he was able to settle into the game.

“The first outing went well. Just trying to throw strikes. The first inning wasn’t my best. The nerves were there but after I settled in, I pitched well,” Thoresen said.

Although he dominated as the game progressed, Thoresen got off to an inauspicious start. He issued a leadoff walk to Elk River pitcher Wyatt Morrell in the top of the first inning. Morrell was promptly advanced to second on a sacrifice bunt by shortstop Brad Geist. Then, a pair of wild pitches allowed Elk River to score the game’s first run.

Minnetonka answered back in the bottom of the third, striking for three runs of its own. Left fielder Nate Shoemaker worked a leadoff walk. Third baseman Joel Thimsen followed with a double, pushing Shoemaker to third. A two-run base knock by the leadoff man, centerfielder T.J. Rogers, gave Minnetonka the lead; and an RBI hit by Ramsey scored Rogers and pushed the Skipper advantage to 3-1.

Once it took the lead, Minnetonka never gave it back.

“We became patient on the offspeed,” Ramsey said. “We didn’t chase anything bad. We hit the fastball and if they hung an offspeed pitch, we hit it.”

Although Elk River scratched across another run in the fourth, cutting the deficit to 3-2 on the strength of a leadoff double by second baseman Mitch Stroh, a single by left fielder Cole Daleiden, and a wild pitch, the Skippers’ bats carried them through the remainder of the ballgame.

Minnetonka added runs in the fourth and fifth inning and held a 5-2 lead going into the sixth.

Facing relievers Zach Olson and Colin Lindgren, who were on to pitch in relief of Morrell, the Minnetonka bats came alive with the Skippers striking for six hits and earning two walks in the sixth.

A bases-loaded double by shortstop Jarod Wandersee, who had entered as a defensive replacement in the top half of the inning, brought home a pair of runs and set the stage for the walk-off.

Matt Muller, who had come on to pinch run for designated hitter Cameron Smrekar after Smrekar worked a leadoff walk to begin the sixth, laced the game-winner—a two-run single—into center field. The tenth Minnetonka batter of the inning would be the game’s last.

Rogers, Ramsey, Thimsen, and catcher Ben Livorsi all had multiple hits for Minnetonka.

The Elks were held to four hits as a team.

Morrell flashed plus offspeed stuff and got several swings and misses against his curveball, which he commanded consistently. But the Minnetonka lineup eventually overpowered the senior righty. Morrell lasted five innings, surrendering five runs on seven hits, walking three and punching out four.

Thoresen picked up the win, Morrell recorded the loss, and junior Nick Lommen, who entered into a 5-2 ballgame in the top of the sixth, notched the save.

Although the season is only one game old, the Minnetonka personnel is excited by the surplus of talent on the Skippers roster. They believe they have a chance to be one of the best teams in the Metro area.

“Our goal is a state championship,” Thoresen said. “That’s what we’re working toward.”

Minnetonka powered past Elk River 12-2 on the strength of a seven-run sixth inning on Thursday night at Veterans Field in Minnetonka.

Minnesota commit Sam Thoresen started for the Skippers (1-0). After a shaky first inning in which he allowed a run after giving up a walk, a sac bunt, and a pair of wild pitches, Thoresen settled in. The six-foot-two right hander tossed five innings, allowing two runs on four hits while striking out seven and walking only two en route to the victory.

After falling behind in the first inning, Minnetonka took the lead for good when it plated three in the bottom of the third. The Skippers tacked on runs in the fourth and fifth before blowing the game open in the sixth.

Matt Muller, who came on to pinch run for the designated hitter, Cameron Smrekar, who drew a leadoff walk to begin the sixth, provided the decisive blow. His two-run single scored Matt Haas and Jarod Wandersee, helping Minnetonka end the game early.

The Skippers struck for 13 hits in the contest. The Elks (0-1) managed only four.

Thoresen was credited with the win and junior Nick Lommen pitched in relief to close out the contest. Wyatt Morrell took the loss for Elk River despite five competitive innings.