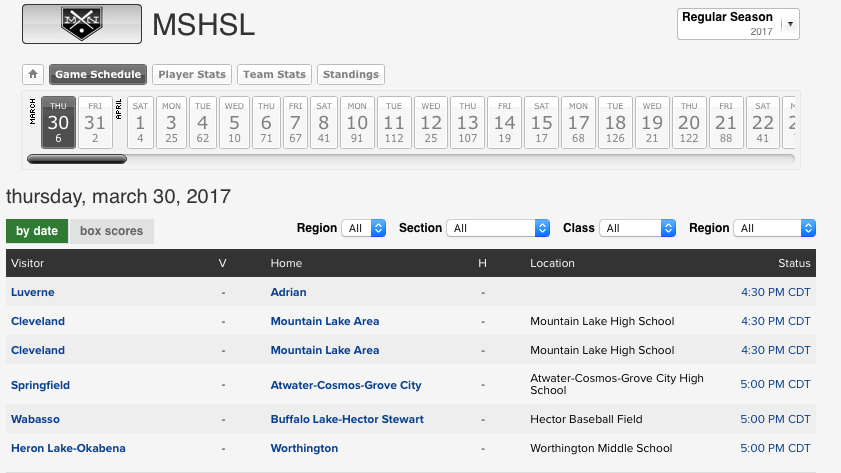 Click here to check out the complete 2017 regular season schedule

Indoor high school baseball is coming to U.S. Bank Stadium for the first time, starting on April 4 when Sartell-St. Stephen plays Moorhead – marking the return of high school teams playing inside the Vikings’ home stadium dating back to the Metrodome.

Defending Class 4A state champion Wayzata opens its season playing at U.S. Bank stadium against Lake Conference rival Hopkins on April 11, which will be the seventh high school baseball game played at U.S. Bank Stadium in as many days.

The Trojans defeated Champlin Park in the state title game 9-1 and are set for a rematch with the Rebels on May 5 at Champlin Park High School.

Burnsville’s standout pitcher and Breakdown’s preseason player of the year, Sam Carlson, is scheduled to make his debut April 10 against Lakeville South.

Carlson, a University of Florida commit, and the Blaze lost to Woodbury in the state quarterfinals before going on to win the consolation tournament.

In Class 3A, Henry Sibley will open its season against Bloomington Kennedy on April 5 at Red Haddox Field. The Warriors home opener is the following week on April 10 where the record-setting Class 3A defending champions will battle Hill-Murray.

Last year, Henry Sibley started the season 4-14 before winning 11 of its last 12 games to get to the .500 mark (15-15), which is the worst record to win a championship in state tournament history.

Underdogs no more, the Warriors will face conference rival Mahtomedi on April 12 in a state championship rematch at Mahtomedi high school.

Belle Plaine opens its season on April 4 with a doubleheader against Fairmount at Herb Wolf field in Fairmount.

Springfield, the defending Class 1A state champions, begin the season on March 30, and the Tigers following game will be played inside U.S Bank Stadium on April 6 versus Sleepy Eye.

Click here to view the schedule, or type the name of your favorite squad into the “Team Finder” at the top right corner of the page for a specific schedule.

If your team’s schedule isn’t posted or needs updating, send the necessary information to scores@sportngin.com.