Bobby DeWitt's young son's brain tumor put the sport on hiatus, but he's back leading his team in the state final. 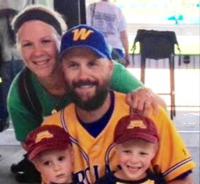 Wayzata coach Bobby DeWitt with his wife, Rachel, and sons William (left) and Sam following the Trojans' 4-2 victory over Lakeville North in the Class 4A baseball semifinals.

A small blond boy, just about 4 years old, ran into his arms amid the cacophony of celebration at St. Paul’s CHS Field Friday.

“Where’s my other bubba?”

DeWitt walked over and scooped up another little blond boy who was standing near his mother.

The Wayzata coach held his twin sons, Sam and William, one in each arm. Rachel, his wife, stood close.

All around them, fans and players of the Trojan’s baseball team were enjoying the aftermath of a dramatic walk-off, extra-inning home run that sent Wayzata to Monday’s Class 4A state championship game.

For the DeWitt family, this was about as good as it gets.

To think barely a year ago Bobby DeWitt thought he was done with baseball.

A native of Wausau, Wis., and a former University of Minnesota player, DeWitt had been a baseball lifer. He couldn’t imagine a life without the sport, not unless something drastic happened.

In August of 2014, his son William, then a 2-year-old, was having difficulty with his large motor skills. An MRI at Children’s Hospital in St. Paul revealed shocking news. William had a brain tumor.

Surgery was recommended as soon as possible. A six-hour procedure to remove the tumor was scheduled in September of 2014.

“It ended up being 12 hours,” DeWitt said. “The next day, the surgeon said it was the most difficult operation he’d every performed.”

The tumor was sent to Johns Hopkins Medical Center, where it was biopsied. More bad news: It was cancerous.

“Usually, when they remove a tumor, the surgeon will cut a margin around it in case of that,” DeWitt said. “But this was the brain of a 2-year-old. He couldn’t cut a margin.”

Rachel accompanied William to Illinois, where they lived in a Ronald McDonald House while he underwent radiation treaments five days a week for six weeks at the Chicago Proton Center in Warrenville.

Bobby stayed home with Sam. As much as he wanted to be be with William in Illinois, cancer treatments aren’t cheap and Bobby’s job teaching at Wayzata Central Middle School provided the insurance.

“It took a financial toll,” he said.

Wayzata is a large school with nearly 3,000 students. Planning for the upcoming season, with schedules and preparations to made for five levels of baseball at the school, take place in September. For DeWitt, it was just too much to try manage at one time. For the first time in his life, baseball would have to take a back seat.

“The kids deserve the best you can give them. There was no way I could do that,” DeWitt said. “My family needed all my attention. I really thought I was done with baseball.”

William’s treatment was successful and he returned home to begin lengthy rehabilitation.

As William improved, DeWitt allowed his mind to drift toward baseball. He started going to Wayzata games, and got permission from acting head coach (and current assistant) Mark Elias to sit on the bench.

“We were getting such positive news about William that I realized I had more to give to baseball,” he recalled.

He returned as head coach basis this season and the Trojans are one game from their first state championship. And DeWitt is back where he longs to be, in the dugout, albeit with a different perspective.

“I used to have about a 60/40 balance between baseball and life,” he said. “But after what’s happened to William and being around [former Gophers’ coach] Todd Oakes and his battle, I can see how so many thing are more important. I realized I want to give back to the players, not only on the field but in life. I want them to realize that the most important thing they can do is build positive relationships and help out other people.”

So far, the news on William is encouraging. He’s been clear of cancer for six months and will undergo MRIs for the next five years, just to be sure. His motor skills are the biggest obstacle but, DeWitt said, William’s brain is not an issue.

“In fact, he took a neurological test last fall and mentally, he’s above average for his age,” he said.

For DeWitt, his biggest goal is to make sure the Trojans appreciate the opportunity they have Monday when they take on Champlin Park in the Class 4A championship game.