New baseball rules would create stricter limits on how prep pitchers are used. 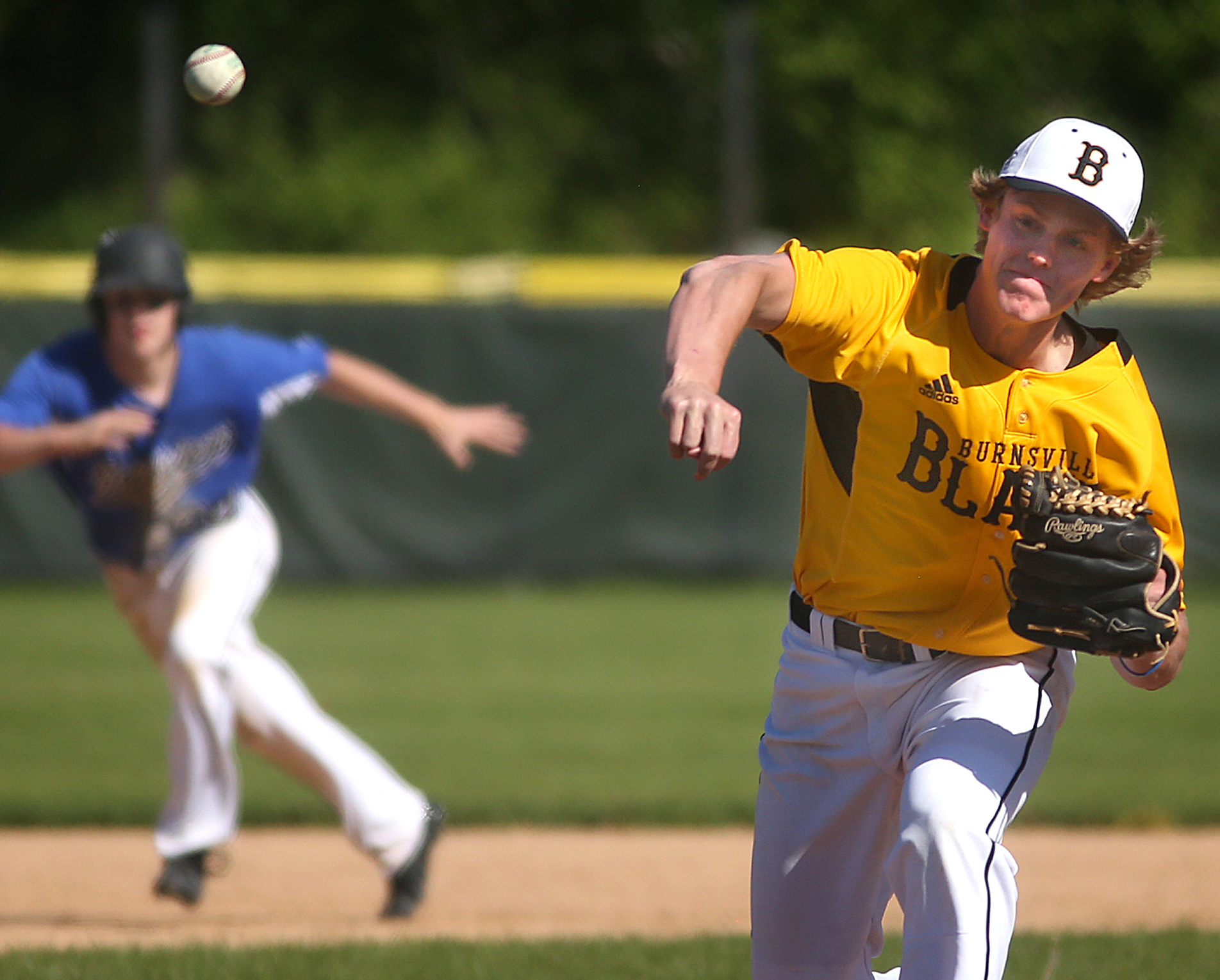 Burnsville's Sam Carlson began a rigorous arm care program after an injury as a 12 year old. The junior is now one of the state's best high school pitchers.

Burnsville junior Sam Carlson, considered the state’s most highly regarded pitcher in his class, said he is “thankful in a weird way” that he had arm trouble when he was 12 years old.

“I now do an arm care program over the winter before the season even starts,” said Carlson, a righthander who injured the back shoulder area of his pitching arm. “The last three years I’ve really taken care of my arm, and I have felt great. It really has changed my perspective on everything.”

Mindful of Carlson’s experience, the Minnesota State High School League wants to implement a pitch count limit starting with the 2017 baseball season, putting the state near the forefront nationally amid growing concerns about arm overuse among young hurlers.

Carlson’s problems started because of underdeveloped muscles and throwing at a high velocity at a young age. His fastball currently touches 88 to 91 miles per hour.

“The single most dangerous pitch out there right now is a hard fastball. That’s typically the pitch a player gets hurt on,” said Dr. Pearce McCarty III, one of three orthopedic surgeons for the Twins and a member of the league’s 15-person committee pushing for the proposal. “A pitch count is safeguarding against injuries to our younger pitchers.”

The committee’s recommendations provide maximum number of pitches and number of days of rest for seniors and juniors after their performance:

• 30 pitches, can pitch back-to-back days but must rest the third day.

Those who are sophomores and younger could throw 85 pitches, followed by three days of rest.

Before it is implemented, the proposal will be reviewed by members of the coaches association at their fall meeting in October.

Pitchers would be allowed to finish the batter they are facing when they reach the maximum number of pitches. The current rule is 14 innings every three days, which actually can lead to 35 innings in a seven-day period.

“The way it is now, we might as well not have a rule,” said Kevin Merkle, high school league associate director. He noted that “the education piece for our coaches is just as important as the rule itself.”

Colorado has been a leader on this development. Colorado, Kentucky and Vermont are the only states using a pitch count in high school. Minnesota would join Alabama, Arizona and Wisconsin in implementing one next season. Oklahoma, Texas and Washington are also developing policies.

“As coaches, we need to be aware of what we are doing with young arms,” said Minnetonka coach Paul Twenge, whose starting pitchers usually take the mound every fifth day. “Arm care in baseball is what concussions are to football.”

How it got started

Minnesota has been discussing the issue for a couple of years now, but gained momentum from a Pitch Smart platform introduced by Dr. James Andrews, the well-known orthopedic surgeon often called on by high-profile athletes in various sports.

Major League Baseball and USA Baseball have teamed up to help young players reduce arm injuries. They have developed age-appropriate guidelines so coaches, players and parents can avoid injuries due to overuse.

“Coaches, parents and fans need to understand why we are putting this out there,” McCarty said. “Building an awareness for an athlete is important. It’s an educational component.”

The data serves as a guideline for pitchers from the ages of 7 to 22. Each state is establishing its own guidelines.

“Hopefully, everybody sees the big picture of having the young kids in mind,” said Albany coach Alan Amdahl, who serves as president of the Minnesota Baseball Coaches Association. “We’re hoping it’s something that spreads to the other levels.”

Three of the top arms in the class of 2017 belong to Carlson, Charlie “Bubba” Horton of Maple Grove and Sam Thoresen of Minnetonka. Carlson already has committed to Florida while Horton and Thoresen are Minnesota recruits.

All three acknowledged they have exceeded the 105-pitch maximum at some point in their careers.

Carlson recently threw 111 pitches in a 6-2 victory over Eastview in a battle for first place in the South Suburban Conference. He threw a complete game, giving up five hits with 14 strikeouts and two walks.

“I couldn’t come back on three days’ rest,” said Carlson, who throws a two- and four-seam fastball along with a changeup and slider. “I like my rest too much.”

Thoresen throws three of the same pitches as Carlson, substituting a curveball for a slider. His best performance of the season was a one-hitter in a 2-0 victory over Wayzata. The righthander struck out eight and walked one while throwing 92 pitches, the fastest of which was 87 mph.

“Our pitching coach wants us to get guys out on four pitches or less, and I try to execute that plan,” Thoresen said. “The big thing is throwing strikes, and trusting the guys behind you to make plays.”

Horton recently threw 112 pitches over six innings in a 6-1 victory over Centennial. The lefthander gave up three hits while striking out 11 and walking two.

“A pitch count is a good idea,” Horton said. “When I’ve had a high pitch count it’s because I’ve begged my coach to stay in the game.”

Horton, who throws a four-seam fastball along with a changeup and curveball, had pain around his elbow area when he threw hard as an eighth-grader. He took a couple of weeks off before returning to the mound.

“I follow the same thing Sam [Carlson] does in the offseason,” said Horton, whose fastball runs from 85 to 88 mph. “I do more arm care things now.”

The pitching limits will cause difficulty for coaches who like to ride their staff ace as long as possible, and for smaller schools that often lack pitching depth. The high school league is looking at enforcing a penalty for coaches who don’t abide by the new standards.

“Some schools do leave their kids out there too long, especially early in the season,” said Sleepy Eye St. Mary’s coach Bruce Woitas. “A couple of years ago a kid threw around 160 pitches against us, and it was early in the season.”

A challenge for Class 1A schools like Sleepy Eye St. Mary’s will be trying to develop deeper pitching staffs.

“The only thing with a small school is most of your pitchers also play a position,” Woitas said. “That’s where we have an issue. You don’t want to put those kids at risk.”

With top pitching especially vital in the postseason, the high school league is looking at boosting the maximum pitch counts by 10 come section and state tournament time.

“Where you run into trouble is when games start bunching up [due to weather or tournament play],” Orono coach Bucky Mieras said. “We have no consistent model when it comes to section tournaments, and that’s when teams need more pitching.”

McCarty doesn’t want coaches to get caught up in just the pitch count.

“The pitch count is just a guideline,” he said. “It shouldn’t take the place of coaches seeing the signs of fatigue or stress from their pitchers. A pitcher should never throw if they have pain in their elbow or shoulder.”