Eastview pitcher Riley Johnson at his best at the big moments

The senior makes a habit of rising to the occasion in clutch situations. 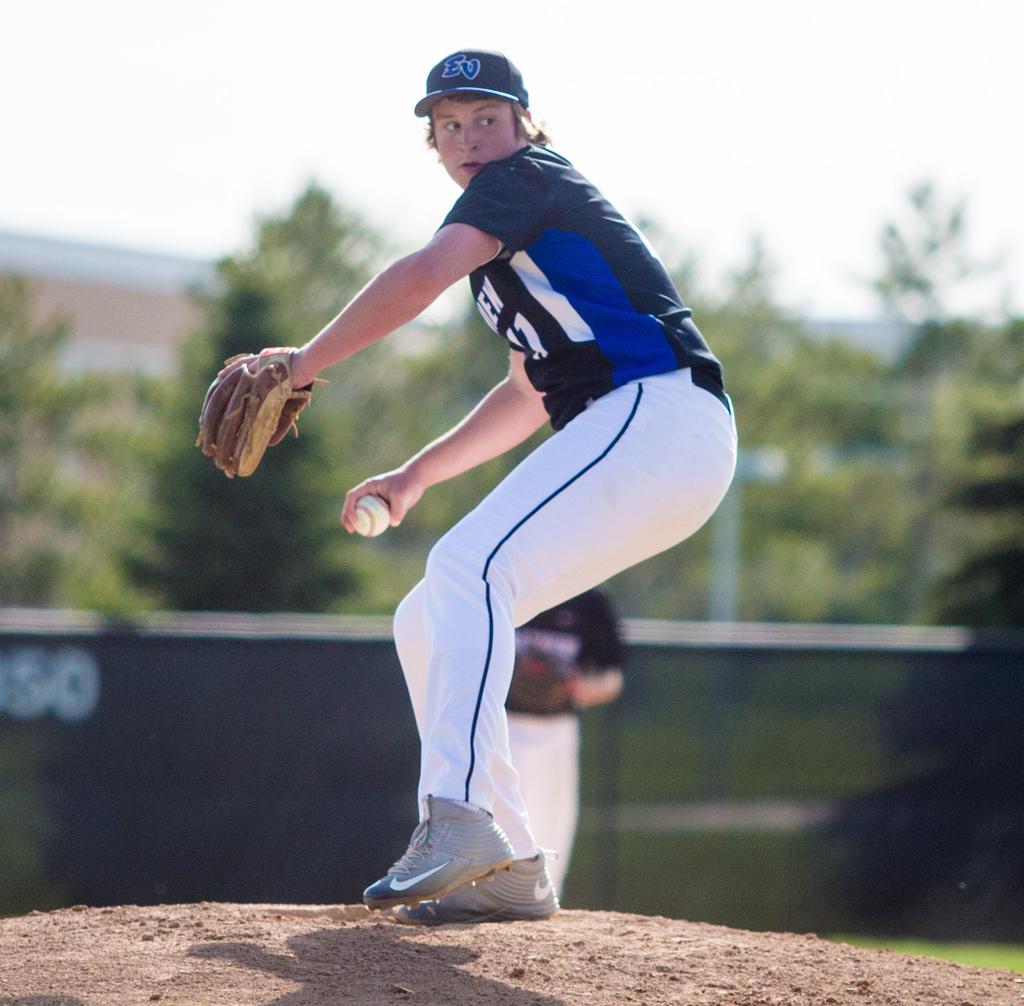 Eastview&#x2019;s Riley Johnson delivered during the Lightning&#x2019;s 7-6 victory over Burnsville on May 6.

He just didn’t have it. Through five innings of Eastview’s baseball game against Burnsville on May 6, senior pitcher Riley Johnson couldn’t find his curveball — his “out pitch,” as Lightning coach Tom Strey later would describe it.

He gave up two runs in the second, another in each of the third and fourth innings, and two more in the fifth. But, as his team was ready to take the field in the top half of the sixth, the Lightning still held a 7-6 lead.

Strey didn’t hesitate in sending his 6-4, 195-pound ace back to the mound.

Let’s put that moment in context quickly: This was a matchup between two of Class 4A’s top teams (No. 6 Eastview and No. 12 Burnsville, by Let’s Play Baseball’s rankings). The Lightning was coming off back-to-back, error-plagued losses to Lakeville South and Farmington, dropping it into a four-way tie — with Burnsville included in that group — at the top of the South Suburban Conference. To top it off, the Blaze had its own ace — hard-throwing Sam Carlson, one of the state’s top prospects — on the mound.

The game was “a big one,” Johnson said, one that could turn the Lightning’s momentum for the stretch run of the season.

Back on the mound in the sixth, Johnson started snapping off his curve. He retired the last six batters, and Eastview (11-3, 10-3 South Suburban) held on for the 7-6 victory.

“You see a lot of kids, especially at this age, if they don’t ‘have it’ that day, they’re done,” Strey said afterward. “It’s just, ‘Well, I’ll have it next time.’ [Johnson] doesn’t think like that.

“He’s not a guy that just blows it by you. He locates his fastball, and he has that devastating curve. He’s a pitcher, not a hurler. He’s now growing into his body and will start throwing harder [his fastball is in the mid-80s], but he really pitches and he’s a confident kid. He keeps battling and battling. He’s the kid you want in a big situation.”

Since Johnson was first called up to varsity two weeks into his sophomore season, he’s shown a propensity to “rise to the occasion” in those moments, Strey said. Johnson won two section tournament games for the Lightning as a sophomore, after pitching sparingly through the regular season. After a dominant junior campaign, he is 5-1 in 2016. In four of those wins, he gave up one run or none.

Johnson, who signed to play at North Dakota State next year, has been a big part of Eastview’s strong start to the season. As of Tuesday night, the Lightning was a half-game up on Burnsville, Lakeville North and Prior Lake in the conference.

“I knew we had the talent; it’s just the matter of guys doing what they can do and playing winning baseball,” Johnson said. “When we do what we’re supposed to do, don’t make any errors and play our game, I’m not sure anyone can beat us.”

Since winning the Class 4A title in 2012, Eastview hasn’t been back to the state tournament. Johnson said his team’s goal is to be playing in the final game of the season — the state championship game — and that he hopes to be on the mound for the last out.

Strey doesn’t doubt that potential scenario, and he knows how badly Johnson wants to be in that moment.

“Sometimes it’s a little hard to describe,” Strey said. “But he’s just a heck of a pitcher. The sky’s really the limit for him as far as how good he can get. He just has it.”