BSM gets two-hit in loss to Cadets. 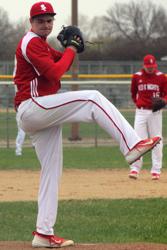 Tyler Wyvell worked into the sixth inning and supplied BSM with it's only two hits.

The Red Knights’ only two hits came off the bat of starting pitcher Tyler Wyvell, who picked up a pair of infield hits on ground balls to short.

Wyvell and Castle locked up in a duel early but the Cadets got a run in the third inning, taking advantage of a leadoff walk to number nine hitter Chris Kettler. A double, one out later, by J.T. Engeswick put runners on second and third and Castle provided the only run he would need with a sacrifice fly.

Wyvell worked a 1-2-3 fourth inning but an unearned run in fifth would set him further back and with his pitch count reaching 93 in the sixth after allowing a hit and a walk to start the inning, he gave way to Stephen Bliss.

Wyvell’s final line for the game saw him allow four runs, three of which were earned, on five hits with three walks and four strikeouts.

The Red Knights will wrap up their regular season, Monday, when they host Robbinsdale Armstrong in a 4:15 p.m. game at BSM Field.