CHASKA, Minn. -- Chaska rallied for four runs in the fifth inning with two out, added an insurance run in the sixth and clinched the first Metro West Conference baseball title with a 5-2 win over Benilde-St. Margaret's. 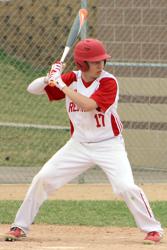 Riley Crane had two hits but was stranded on base three times.

Things started out well for the Red Knights as Alex Houlihan singled with one out, stole second base and came around to score when Tyler Wyvell reached on an error.

Starting pitcher Trebor Eberle needed 19 pitches to get out of the first inning, throwing just seven strikes, but threw 29 of 46 for strikes over the next three innings, keeping the Hawks off the scoreboard.

In the third inning, BSM increased its lead to 2-0 when Riley Simonetti launched a ball over the left-center field fence for his second home run of the season.

That 2-0 lead last into the fifth inning when Eberle got the first two batters he faced out on just four pitches.However, five consecutive hits would lead to Chaska taking the lead before Eberle recorded his fourth strikeout of the game to end the frame.

"He came after us," Baumann said. "We've hit guys like that pretty well this season but, after the first inning, he attacked the strike zone and made some good pitches."

"We failed to take advantage of our opportunities," BSM head coach Greg Hoemke. "We left too many runners in scoring position."

Houlihan and Riley Crane each had two hits to pace BSM's offense. Crane reached base safely in all three of his plate appearances but was stranded on base each time, including twice at second base.

The Red Knights will close out the conference portion of their schedule, Wednesday, when they host St. Louis Park in a 4:30 p.m. game.