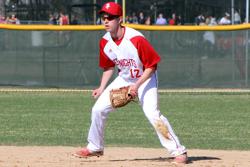 Jamison Schuh saved one run with a diving play in the fifth and ended the game with a double play.

Eberle pounded the strike zone, throwing 74 of his 103 pitches for strikes and didn't give up a run until the seventh inning.

Schuh was his biggest supporter as he made two key defensive plays at second base.

The first came with runners on first and second with two out in the fifth inning. He made a diving stop of Erik Swenson's ground ball up the middle, preventing Nolan Rein from scoring from second base and Eberle got Grant Barland to fly out to end the inning two pitches later.

In the seventh, Jory McWilliams would get a ground ball up the middle past a diving Schuh to drive in the Eagles' lone run but, two pitches later, the Red Knight junior made a diving stop of another Swenson grounder up the middle, touched second base to force out McWilliams and threw from one knee to retire Swenson at first to end the game.

While Eberle was backed by outstanding defense, Kennedy starter Jon Sodergren was not as his team committed six errors, which led to four unearned runs for the Red Knights.

In the sixth inning, Jack Qualen, Schuh and Riley Simonetti all reached on errors to open the inning and Alex Houlihan's RBI single was the only hit of the inning as BSM scored twice and left the bases loaded.

Eberle's pitching line saw him scatted eight hits while walking two and striking out three in the Red Knights' first complete-game effort of the season.