BSM held to one hit in shutout loss at Chanhassen. 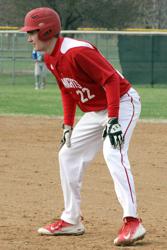 Red Knight starting pitcher Tyler Wyvell collected the lone hit off Schnettler, leading off the top of the fifth inning, but was erased from the base paths when Derek Dress grounded into a double play.

Wyvell pitched well for the first four innings as he allowed just one earned run on four hits and three walks with six strikeouts.

However, needing 90 pitches to get through four innings, Wyvell was relieved to start the fifth and the Storm would score eight runs in their final two at bats to end the game via the 10-run rule in the sixth innings.

BSM returns to action, Wednesday, with another night game when they face Bloomington Kennedy in a 7 p.m. game at Red Haddox Field.