ST. LOUIS PARK, Minn. -- John Vecere and Stephen Bliss combined on a five-hitter and some timely hitting helped Benilde-St. Margaret's end an eight-game losing streak with a 5-3 win over Richfield. 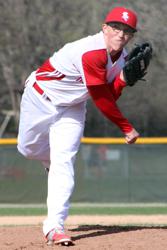 John Vecere allowed just one earned run over five innings to earn his first win of 2015.

Vecere did not allow a run in his first four innings of work but had to pitch out of several jams. The third was the only 1-2-3 inning he would pitch but he managed to strand five runners on base heading to the fifth.

Meanwhile, his team would provide him with a four-run lead, getting a run in the second on Cole Jacob's RBI single, another in the third on a Tyler Wyvell base hit, and two in the fourth, when Hewitt doubled home one run and came home to score when Will Whitmore grounded into a double play.

In the top of the fifth, Vecere ran into trouble as he gave up a pair of hits and a walk while a pair of fielding errors led to two of the three runs being unearned.

The inning could have been worse for the Red Knights but, with the bases loaded and no one out, John Krohn lofted a fly ball into short right field. Whitmore caught the fly ball in stride and fired a strike to Nick Gionet at home in time to cut down Marcus Voigt.

BSM would add an insure run off relief pitcher Tommy Fallon when Hewitt singled home pinch runner Alex Houlihan. However, a force out at home and an inning-ending ground out with the bases loaded would keep the hosts from putting the game out of reach.

Bliss then took over on the mound and needed 14 pitches to work a 1-2-3 sixth, followed by a seventh inning in which he issued a lead-off walk before getting the game's final three outs without the ball leaving the infield.

Jack Qualen scored two runs as a courtesy runner for Gionet and stole two bases in the process while Hewitt had two hits and two RBI while Jacob going 3-for-3 to lead the BSM offense. Riley Crane also singled twice.

The Red Knights are back in action, Thursday, to complete their suspended game from Friday at Hopkins. The game will resume with the Royals batting in the bottom of the fourth, leading 10-3.

Friday, BSM will host Robbinsdale Cooper in a 4:30 p.m. game at BSM Field.