ST. LOUIS PARK, Minn. -- Benilde-St. Margaret's had runners on base in all seven, including nine in scoring position, but left all 13 on base and Chanhassen slowly pulled away for a 9-0 victory. 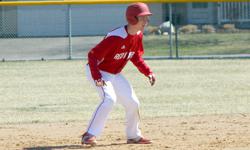 Jamison Schuh had two hits and was flawless in the field for the Red Knights.

An unearned run in the first inning gave the Storm a 1-0 lead, which they held into the fourth inning, when they scored four runs after Tyler Wyvell had retired the first two batters of the inning.

The four-run outburst was capped off when Daniel Pharis fouled off four pitches before hitting a three-run home run to give Chanhassen a 5-0 lead.

The Storm had several other chances to blow the game open.

In the second inning, with runners on first and second, Riley Simonetti threw out Chad Clute trying to steal third and Wyvell then got a strikeout to end the inning.

In the third, with runners on first and second again, Jamison Schuh snared a sharp, one-hop, ground ball off the bat of Ty Denzer to start an inning-ending double play.

Leading 5-0 with the bases loaded and no outs in the fifth inning, Kevin Sampson grounded sharply back to the mound, where Mitch Melmquist fielded the ball cleanly and threw home to retire Jack Mattson.

Simonetti then relayed the ball to first to get Sampson and, when Nick Smith rounded third too far, Wyvell fired the ball to Derek Drees and his throw to Melmquist, covering home, was in time to complete a triple play.

Both Simonetti and Schuh had two hits to lead the Red Knights' offense and Schuh was also hit by a pitch, reaching base safely in three of four plate appearances. Jack Qualen added his second double of the season for BSM's only extra-base hit.

With their first loss in Metro West Conference play, the Red Knights drop to 2-2 overall on the season and 2-1 in MWC action.

They return to action, Thursday, when they host Bloomington Kennedy in a 4:30 p.m. game.