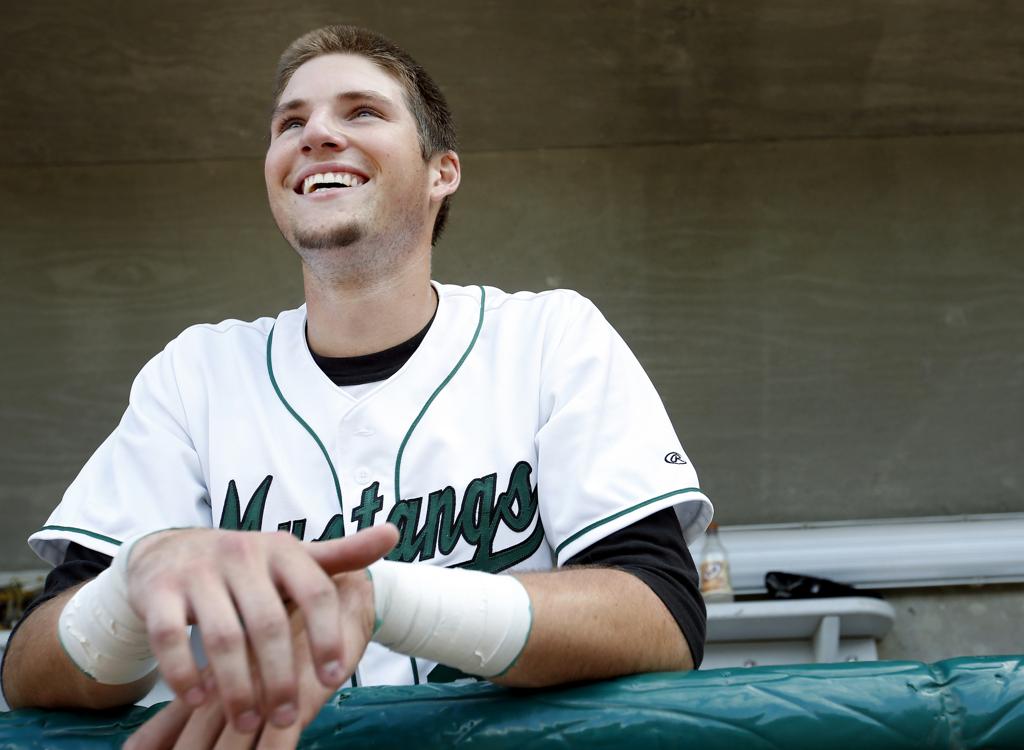 A cape billowed behind Mounds View’s Sam Hentges after his extraordinary performance in the 2013 Class 3A baseball tournament.

He pitched a complete-game, 9-4 victory over Coon Rapids to secure the Mustangs’ spot in the state final at Target Field. Then his bat took over, producing a triple, double, single, three runs scored and two RBI to help beat Rocori 8-0 for the championship.

Hentges’ celebratory postgame romp with a flag around his neck presented a superhero-like image, and elevated expectations for someone still getting used to a new role.

Arkansas looked past Hentges’ limited pitching experience and offered the lefthander a Division I scholarship to pitch in the formidable SEC. The Cleveland Indians drafted him in the fourth round of the MLB amateur draft only a year after he threw his first varsity pitch. The 17-year-old senior has made nine varsity starts and started only two games as a junior.

What Hentges did with those limited opportunities were more than enough for him to be named Star Tribune Metro Player of the Year.

Hentges returns to the Class 3A tournament Thursday, still trying to digest all that’s happened to him in the past year. The Mustangs face Elk River at Midway Stadium at 12:30 p.m.

“Last year helped me become more of a leader, and I guess you could say it transferred into this season pretty well,” Hentges said. “It all went really fast. As soon as I made the transition to pitcher last spring, it all of the sudden flew by. I never thought I’d be a pitcher the way high school started out.”

Mounds View coach Mark Downey said there’s nothing superhuman about his star pitcher, but Hentges has made a dramatic transformation into one of the country’s top prospects.

At 6-7 and 230 pounds, Hentges towers above his teammates and the competition. His fastball reaches 94 miles per hour and sits in the low 90s. His trim frame is quick enough to dash home on a passed ball and his bat is among the most productive in the state.

It wasn’t always this way. Hentges started out at Mounds View as a 6-foot first baseman. His first growth spurt was four inches, then two, followed by one more inch to build an ideal pitching frame. After the Mustangs lost their No. 2 starter because of an injury late last season, Hentges quickly learned how to throw strikes.

Professional scouts from all 30 major league teams were intrigued. They got their first glimpse of Hentges at last summer’s U.S. national team tryout. He continued to impress throughout a summer of showcases including the Under Armour All-America Game.

“I think when everyone sees him they think ‘Wow, this kid is the show,’ but when he’s in a group of people hanging out, he’s just a selfless, humble person and a great friend,” Mounds View teammate and junior pitcher Henry DeCaster said. “This year I think we all thought Sam had the potential to do the same thing as Max [Knutson, the 2013 co-Metro Player of the Year and Division I-recruited pitcher from Mounds View]. Then he took that Superman mentality and kept improving and getting better.”

Hentges still has room for improvement, and that’s part of what pro scouts like so much about him. His late conversion to pitching limited wear and tear on his arm. With so much concern about overthrowing and injuries derived from youth baseball and year-round competition, Hentges is a rare find with endless potential.

The Indians will travel to Shoreview next week with the goal of signing Hentges. As a kid he dreamed of turning pro out of high school, but with a scholarship waiting from one the country’s top college baseball programs, it won’t be an easy decision.

Hentges’ draft slot (No. 128 overall) is valued at $400,200. That figure can rise or fall and would likely be combined with the value of a four-year scholarship to Arkansas.

“Sam is probably more refined right now as a hitter than he is at pitcher. But the tools are there,” Downey said. “He’s blossomed before people’s eyes dramatically.”