Reusse: New Prague baseball goes from one win to No. 1 seed

The prep baseball team has had a remarkable turnaround. 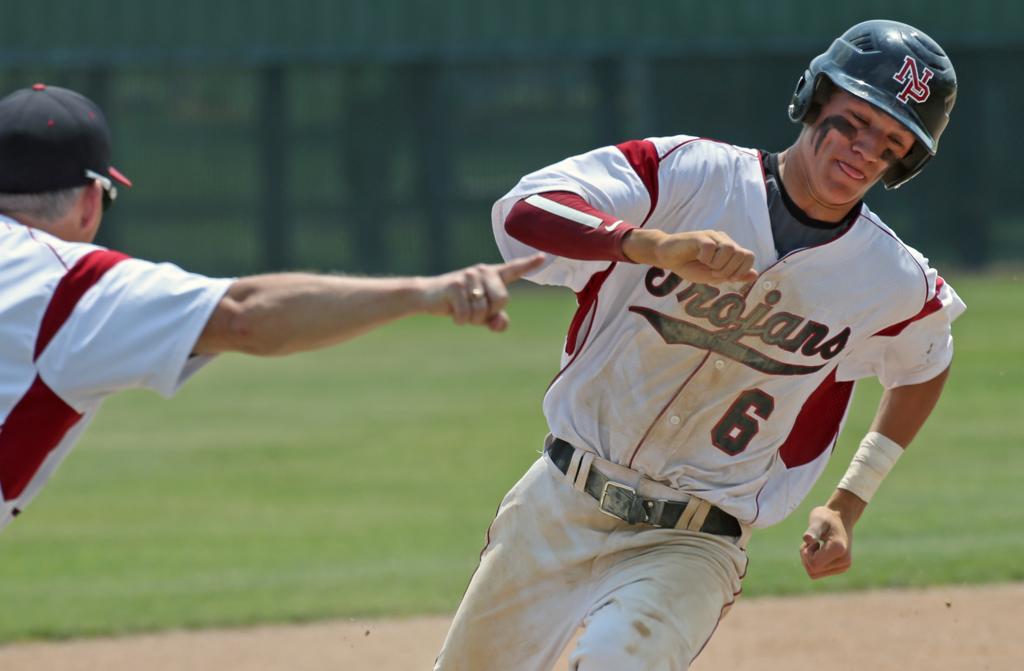 NEW PRAGUE, MINN. – The residents of New Prague take pride in the support that they muster for the athletic teams at the local high school. That loyalty can only be stretched so far, as demonstrated in the spring of 2013 by a baseball team that finished 1-20.

How was attendance for games at Memorial Park as that season progressed? “A handful of parents and three girlfriends,” catcher Joe Heinz said.

The atmosphere was considerably different at noon Saturday, as the Trojans prepared to play Eden Prairie in the last of the winner’s bracket games in the Section 2AAA tournament.

New Prague went 17-2 in the regular season and gained the No. 1 seed in the section that also includes mega-schools and baseball powers Eden Prairie and Minnetonka.

Victories over Mankato West and Waconia had elevated the Trojans into this showdown with Eden Prairie. It was a game to determine exactly how much magic there was in this New Prague baseball turnaround.

For sure, it had created enough interest to grow the crowd from parents and girlfriends to close to 1,000 people jammed into Memorial Park.

Dan O’Brien was among the witnesses. He was a standout town-team ballplayer and also was the long-serving football coach at New Prague.

“We don’t have a great hitting team,” O’Brien said. “The pitching has been very good — starting with Daniel [Feneis] — and they have been outstanding in the field.”

Feneis is a tall lefthander headed for Minnesota State Mankato. We would benefit as a society if Feneis’ pitching pace would be copied at all levels of baseball. Call him the anti-Pelfrey (as in Mike).

“I do encourage our pitchers to work quickly, but Daniel was like this from when I first saw him a few years ago,’’ New Prague coach Tom Wetschka said.

Feneis tore through the first, getting a couple of nice plays from Auggie Isaacson, a quick shortstop. Issacson promptly led off the bottom of the first with a bunt single, and worked his way around the bases to give the Trojans a 1-0 lead.

There were two more hits in the inning, but a baserunning mistake ended the possibility of further damage. Sadly for the home crowd, the gaffe was also the first indication of how Saturday’s game was going to play out.

A simple bouncer to first, a double-play relay, a fly ball to left … all were misplayed by the Trojans as part of a five-error meltdown that gift-wrapped the first four runs for the visitors.

Eden Prairie cruised to a 6-2 victory. The result left the Eagles needing one more win to advance to the Class 3A state tournament and New Prague needing three.

According to Wetschka’s statistics, his team came into the game with a fantastic .963 fielding percentage.

“This was completely uncharacteristic for us,” catcher Heinz said. “We didn’t give runs away to the other team all season.”

Baseball is expected soon to go from three classes to four, as softball has done, for future tournaments. For now, New Prague is in the top class with Eden Prairie, a school with three times as many students.

There was no whining over this on Saturday, but it does create different realities for Eden Prairie and for New Prague, with its class sizes of under 300.

“In this era of specialization, we need multi-sport athletes in New Prague or we’re not going to be able to compete,” Wetschka said. “For that to work, with the summer participation that now exists in all sports, there has to be cooperation among the coaches.

“At New Prague, we all get together and lay out the summer schedules to try to avoid too much conflict. I know when there’s a football camp at South Dakota State, a wrestling camp in Iowa, what’s on the hockey players’ schedule.”

Heinz has competed in football, baseball and wrestling (his future sport at Concordia in Moorhead). He is among a handful of three-sport seniors on this baseball team.

Three sports with today’s demands on preparation … what’s that do to the social life?

Heinz smiled and said: “My social life is practice.”

Patrick Reusse can be heard 3-6 p.m. weekdays on AM-1500. preusse@startribune.com