Medical professionals say a player’s formative years are key to avoiding problems down the road. 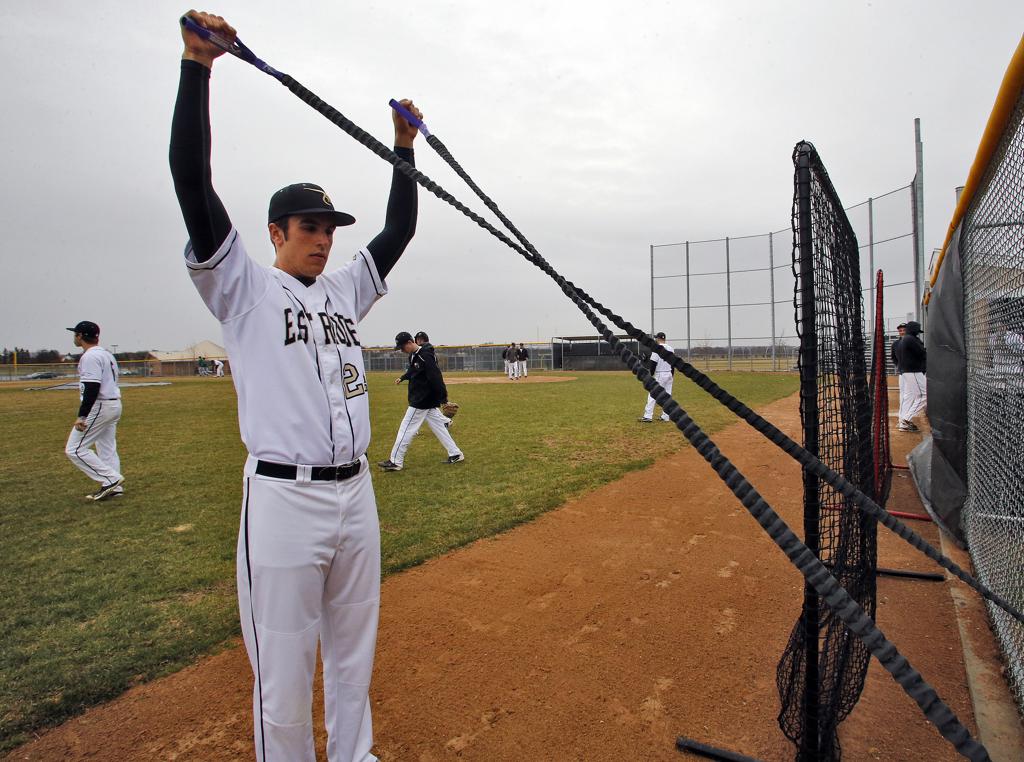 East Ridge pitcher Cal Kellner used a rubber band device to warm up before a recent start. He was unable to pitch his freshman year because of an elbow injury.

Players in the baseball program have been plagued by arm injuries over the past two seasons and forced coach Brian Sprout to shelve several pitchers showing up for the first week of practice with a note instead of a glove.

Early spring injuries no longer surprise high school coaches around the state. With the rise of club teams and showcases, year-round baseball has become the standard and arms don’t have time to rest. Medical professionals believe overthrowing during a player’s formative years will have significant repercussions down the road.

Sprout said Mayo Clinic and other doctors have advised that young players need “at least three months off, and that’s not happening in some cases. We had a ninth-grader whose arm was just throbbing in pain after our week of tryouts and had to be shut down. He’s hurting because he can’t stop throwing.”

Pitchers Cal Kellner, Parker Moquist and Ben Zocher are some of the East Ridge players who have missed at least part of a season because of sore elbows.

Zocher’s doctor’s note kept him out until last Wednesday’s 12-11 victory over Park of Cottage Grove. Before a sore arm delayed his start to the high school season, the sophomore was expected to be a varsity pitcher.

Kellner, a sophomore who threw nearly 100 pitches in last Wednesday’s start on a rainy and chilly afternoon, missed his freshman season after a doctor’s note diagnosed him with a partly torn elbow ligament.

Moquist lost the ability to pitch when he fractured his elbow while throwing during last spring’s tryouts.

“Take those three to four months off,” said Kellner, offering advice based on his experience. “I didn’t take enough time off and I hurt my arm. It’ll make all the difference.”

Each athlete started playing travel/club baseball before he was a teenager.

“I was told I would never pitch again,” Moquist said. “I pitched third grade through 10th grade any time I was available, and then after I’d go play shortstop. Now my arm is done.”

Several Major League Baseball figures are speaking out against youth overthrowing in response to eight big leaguers requiring season-ending Tommy John surgery in the past month.

Even John — the lefthanded pitcher for whom the procedure to reconstruct the ulnar collateral ligament in the elbow was named — believes these injuries are the result of throwing too much as youngsters.

“In essence, the injury itself is a buildup of overuse. And not overuse as an adult, but overuse as a kid,” John told the Watertown Daily Times (N.Y.) last week. “And nowadays, probably 70 to 80 percent of the pitchers today have been pitching 12 months a year since they were 7, 8 or 9 years old. And your arm is not made for that.”

Any mention of Tommy John surgery scares East Ridge ace Drew Molin, who has committed to play baseball at the University of St. Thomas. After his starts, Molin’s future coaches inquire about the outcome and number of pitches he threw.

“Growing up I had a rubber arm. I could throw 300 pitches a week and I’d be fine,” Molin said. “Starting last year, my arm started to hurt regularly, so I had to start taking care of it. … My doctor said to take it easy because I had been throwing so much, there was inflammation.”

Pitch counts are paramount to trying to keep a pitcher injury-free. Several studies have broken down the number of pitches an individual should throw per game and per week based on age, the appropriate age to throw breaking pitches, the significance of proper mechanics and the need for regular communication about any arm soreness between player and coach.

Orthopedic surgeon Dr. James Andrews, considered the foremost authority on pitching-related injuries, spearheaded many of these studies after noticing a significant rise in the number of young athletes requiring Tommy John surgery.

Andrews, a director for the American Sports Medicine Institute, agrees with John and credits year-round baseball, radar guns and fatigue as some of the factors leading to overuse injuries.

Armstrong coach Brian Sobiech is willing to disappoint some people if it means protecting the future playing careers of his pitchers. Falcons lefthanded pitcher Jordan Kuznia struck out 11 batters through four innings in his first outing of the season against Coon Rapids. Despite the hot start, Kuznia’s pitch count reached its limit around 70 and Sobiech took him out.

Parents were upset, and so was Sobiech, after Armstrong surrendered Kuznia’s 2-0 lead and lost 3-2. However, keeping pitchers healthy is a priority and winning the last game of the season is more important than winning the first, Sobiech said.

“It’s tough to have him pull you in that situation ’cause you’re feeling really good about it, but you know your pitch count is up pretty high and you just have to know he’s doing what is best for you,” Kuznia said. “I was 12 years old in Little League when I first had pain in my arm. … I realized I can’t just go every day. I have to take care of my arm for when I get older.”

Barta said Blizzard teams carry seven or eight pitchers to avoid overusing arms in a weekend tournament full of doubleheaders. Players are encouraged to take a couple of months off from throwing late in the calendar year.

Pitch-count monitoring goes by pitches per inning, not game. If a pitcher has a bad inning of 30-plus pitches, fatigue can set in much earlier, Barta said.

“You have to whittle it down to how much is going into each pitch,” said Barta, who also hosts a top local showcase. “Who it affects even more so is the pitchers that also play a position — the two-way player. Throwing a seven-inning game and then playing shortstop the next game is tough on the body.”

No pitchers have required arm surgery in the Blizzard’s 10-year existence, Barta said.

Minnetonka coach Paul Twenge supports traveling-team baseball and showcases to a certain extent. He won’t deny players the potential opportunities that are available year-round but is aware of his duty to protect his athletes. Part of this responsibility means empowering players to speak up when tired or hurting.

Sprout is trying to do the same with his players, though he knows it’s a tough spot to put a 16-year-old in when he’s fighting for playing time.

“I know a few kids that have thrown out their arms from being abused throughout the years,” Park of Cottage Grove pitcher Sam Domeier said. “You’ve always got that one kid that can throw really hard and they use him more often. You can’t really do that anymore, and I think coaches have been more aware of it this year.”