A resignation at Mounds View on the heels of a state title reignited the issue of who holds sway in prep coaches’ job security. 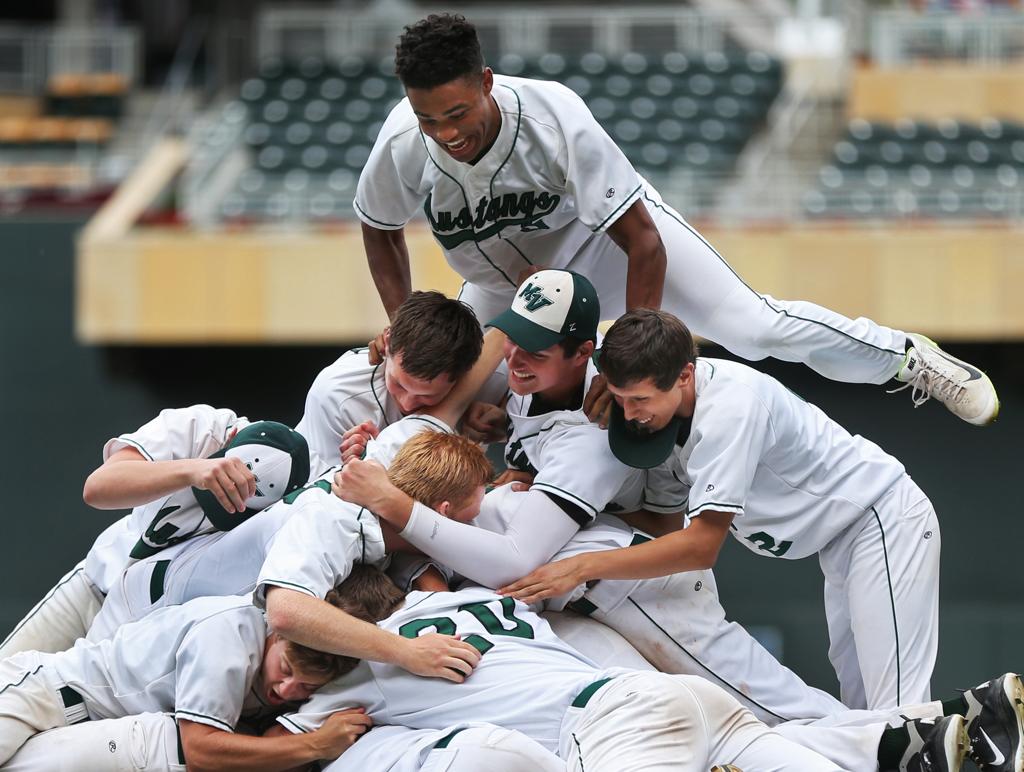 Mounds View players piled on after its state baseball title in June. They lost their coach two months later.

Mounds View won its first high school baseball title in mid-June when Max Knutson struck out his ninth batter for the final out, sealing an 8-0 victory at Target Field.

Two months later, shortly before the start of the current school year, school officials told head coach Jon Nuss, 34, that he would not continue in his job.

What has emerged is a story of a high school team whose magical ride to the state championship took an odd, final twist, and a lesson of how high school coaches — regardless of on-the-field success — are ultimately at the mercy of school administrators. Nuss’ departure came just months after the Legislature, attempting to tackle the issue of overzealous parents, passed a law saying that “parent complaints must not be the sole reason” for a coach not to have a contract renewed.

By the time Nuss won state baseball Coach of the Year honors in October, school officials were saying little of what had happened. The silence only deepened a puzzling tale of how even winning a state title was not enough to save a coach’s job.

Team captain Sam Hentges told the school newspaper in September it involved “something with a time commitment, I think,” and that Knutson said Nuss and his staff “coached the right way and helped us to a state championship.” Nuss, meanwhile, called the state high school coaches association to ask for help.

Mounds View Activities Director Bob Madison told Nuss in August that he could return, but only as the team’s associate coach. In his first expansive comments, Madison said recently that he told Nuss the associate’s job would be “an opportunity for you to get better.” Nuss declined the offer, and Madison said the result was that Nuss resigned. In explaining his actions, Madison said the change was made, in part, to utilize “the strengths and weaknesses that all of us have.” He did not offer specifics.

Nuss’ leaving so upset Zac Quammen, an assistant to Nuss last year, that Quammen told the school last month that he also was leaving the program. “I resigned because I didn’t feel comfortable being part of that program anymore after what happened,” he said.

Nuss, who still teaches at the high school, said he tried to dispel a series of rumors about why he left, including that vague “family issues.” “[I kept saying], ‘Family is great. Thanks for asking,’ ” he said.

Nuss said he was caught off guard in August when Madison laid out his plan. “He [said he] kind of wanted to restructure it, and that he felt this would be best for the program,” Nuss said. “I would definitely say I was surprised.”

So were many others, including the president of the Minnesota high school baseball coaches association that named Nuss its Coach of the Year. “I was shocked,” said president Todd Smrekar. “It is unusual that after you win a state championship — being as young as he is — that you’d step aside.”

Among the parents of last year’s players, Nuss has drawn praise and mild criticism.

One parent, John Abercrombie, whose son Alec played center field, said Nuss’ leaving was driven by “parent involvement, playing time [and] kids not making the roster.” He said some parents, when volunteering to help the baseball program, “seem to think that they have kind of a right to help make decisions.”

In an e-mail, Smestad added: “The head coach has to do a lot more than coach, and that is where I see him needing to get better.” He declined to elaborate. “There is no scandal here,” Smestad said.

The state legislation last spring came after several high-profile hockey coaches lost their jobs. In boys’ hockey, 110 coaches have left in the past five years, and at least 38 of the departures — about 35 percent — involved parental complaints, said Mike MacMillan, executive director of the Minnesota Hockey Coaches Association.

Quammen said there was friction on last year’s team but said it came from players who thought they should be playing more and “I didn’t think it was anything out of the ordinary.” He said that, after Nuss won the state title, “I expected it to go away [because] winning makes everybody happy.”

When Nuss left the team, Abercrombie said he tried to explain what happened to his son, a sophomore last year. “We just tried to let him know that these things kind of happen. We don’t understand why they happen. Your mother and I don’t like that it happened,” he said. “It’s not fair.”

Jeff Ridlehoover, who became Mounds View’s principal in July, just weeks after the team won the state title, said he never heard from parents complaining about Nuss. Madison, meanwhile, said he receives parent feedback regularly — involving all sports — but said he could not tell whether any of it regarding Nuss was out of the ordinary because “I don’t know what ordinary would be.” Nuss was replaced with Mark Downey, who had previously coached the team.

“He wasn’t asked to leave. He chose to make those decisions on his own accord,” Ridlehoover said. “I know other coaches who’ve resigned over the years after they’ve won state championships. It didn’t strike me as odd.”

Outside the meeting room, the large trophy from last year’s state title team sat in a glass case near the school’s main entrance. Madison said that asking booster club members about Nuss’ departure — several months after it took place — would “probably create some feelings of unrest that haven’t been there for a while.”

Although Mounds View was considered to have a good team heading into last season, a variety of factors — including a harsh spring of lingering bad weather — shortened the season, and forced many high schools in Minnesota to fit a half-dozen games into a given week.

In the state tournament, Mounds View squeezed by Forest Lake, thumped Coon Rapids and faced Rocori in the title game on June 17. Mounds View scored all the runs it would need in the first inning. Hentges went 3-for-4, and Knutson scattered four hits while pitching a complete game.

Ricky Michel, activities director at Stillwater High School, said Mounds View was a preseason favorite to win the 10-team Suburban East Conference. “They came in probably with the best pitching staff,” said Michel, who also serves as baseball coordinator for the conference.

When Mounds View won the state title, Michel congratulated Nuss and told him he “made the conference look very good.” Michel said he still wants Nuss, despite what happened, to coach a high school baseball all-star game this summer.

Five months after he lost his head coaching job, Nuss said he is at peace with what happened. “I’m proud of the work I did,” said Nuss, who said he will be an assistant coach this year at a nearby high school that he declined to name. “I think God does things like this [and] presents us with new, unique opportunities.”