One path to college baseball goes through a Vadnais Heights academy. 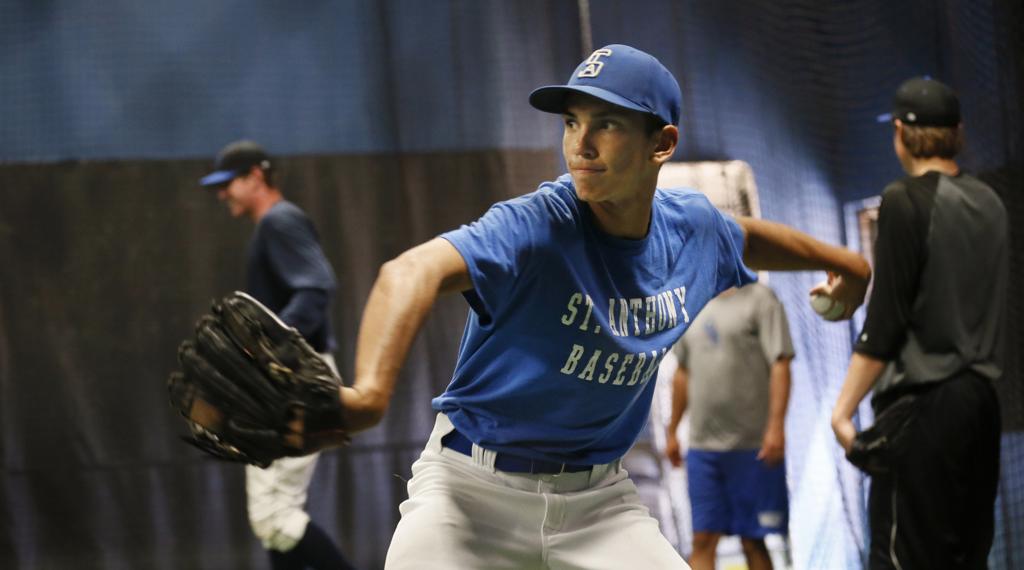 Their uniforms didn’t match. Their hats all featured a different logo. Half of the group had just faced off on the field. None of that mattered to these 14 high school baseball players from across Minnesota. The recently graduated seniors interacted like family at the annual Play Ball! Minnesota High School All-Star Series in Chaska last month.

While Metro East players embraced those from Minnesota South, Metro West’s stars dropped to a knee and posed for a group portrait. What unified them wasn’t apparent without knowing a bit more: Outside of their all-star uniforms and respective high school hats, they all had represented the Minnesota Blizzard.

Blizzard baseball has become synonymous with the best talent in the state. The program is made up of four divisions. The Minnesota Baseball Academy provides instruction and development. Minnesota Blizzard teams compete as fall baseball and elite travel squads. The Advanced Fall Baseball League is a metro-wide youth league. And ScoutStop offers college and pro exposure for student athletes.

“This is the best program I’ve been with. The coaching staff and the players have a way they go about their business,” said Champlin Park catcher Matt Smith, an all-star, all-metro selection and college-bound athlete. “I wouldn’t be standing here at this [all-star] game if it wasn’t for this organization.”

The Minnesota Baseball Academy/Blizzard celebrated its 10th anniversary this past May with what owner Adam Barta said is one of its strongest graduating classes. Forty-seven current or former players who graduated from high school in 2013 plan to play college baseball.

Barta and former owner Johnny Anderson started the academy in 2003 with one team. It now has 26 teams (ages 9-18), 10 of which travel out of state.

The organization has grown into a Vadnais Heights warehouse that features 8,000 square feet of synthetic turf scattered with batting cages and pitching lanes, a player’s lounge, kitchen, and workout room.

This package has helped produce some of the state’s top baseball names. Six of the seven Mr. Baseball finalists were part of the Blizzard program at one time or another. More than 20 of the 80 players invited to the all-star series in Chaska, and eight of the Star Tribune’s first-team all-metro members, are Blizzard alum.

Logan Shore, Mr. Baseball 2013 and two-time Metro Player of the Year, said he was an average player before joining the Blizzard and meeting Barta. Shore had heard of several other competitive fall ball programs and travel teams, but none matched the results of the Blizzard. The 29th-round Twins draft pick and University of Florida-bound pitcher said the program taught him how to play at the next level.

“I just wanted to play more baseball,” said Bloomington Jefferson’s Erik Monson, who joined the program when he was 14 and will play college baseball at Angelo State University in Texas. “Then I went to my first showcase and got a couple letters from college coaches. That got me really excited for all the things [the Blizzard] could do for me.”

St. Louis Park’s Ryan Froom left the program and came back. His return led to a college scholarship at South Dakota State University.

The Blizzard’s contacts and exposure have attracted players from throughout the Midwest and Canada. Barta said the number of scholarships his players have received total in the millions of dollars.

“They’ll do everything they can to get you to play in college if that’s what you want to do,” Froom said.

It comes at cost, though. A full season with the Blizzard Elite is priced $2,400, according to several of the players. That was too much for Matt Hopfner, an all-metro player from Edina. He briefly played fall ball with the MN Starz, another fall travel team, and depended on Edina’s Legion baseball for summer competition.

Hopfner will play in the Big Ten at Northwestern next season. The pitcher/outfielder is convinced that if you are good enough, scouts and college coaches will find you. Burnsville’s Tyler Hanson agrees. The infielder/pitcher played with the Blizzard as a 15-year-old and didn’t return.

Hanson said the Blizzard helped his baseball IQ and mechanics, but was a huge financial investment. The Gophers fell in love with Hanson during his post-Blizzard career and offered him a scholarship.

Armstrong coach Brian Sobiech praised the exposure academies provide but acknowledged that the year-round commitment limits opportunities in other sports. One of his players, Justus Nelson, benefitted from the commitment and will play at the University of North Dakota next year.

St. Paul Academy standout pitcher and infielder Matt Fiedler is convinced every penny he and his family spent were more than worth it. The Gophers recruit is even more thankful for the portion of fees he was able to work off. The Blizzard ownership has programs to assist players financially. Fielder worked at the academy’s facility and events.

“Where I am today is almost solely because of the Blizzard,” said Fielder, a six-year member. “Adam Barta has never turned down a player because of financial reasons. It’s definitely worth it. It wasn’t an option to stop playing with the team.”

Blizzard Class of 2013 Division I Commitments

Twelve of 43 newly graduated seniors who have played for the Blizzard are headed to Division I schools next year. Nine are going to D-II programs, 13 to D-III and nine to junior colleges.