Kasson-Mantorville advanced to the Class 2A title game against Perham. 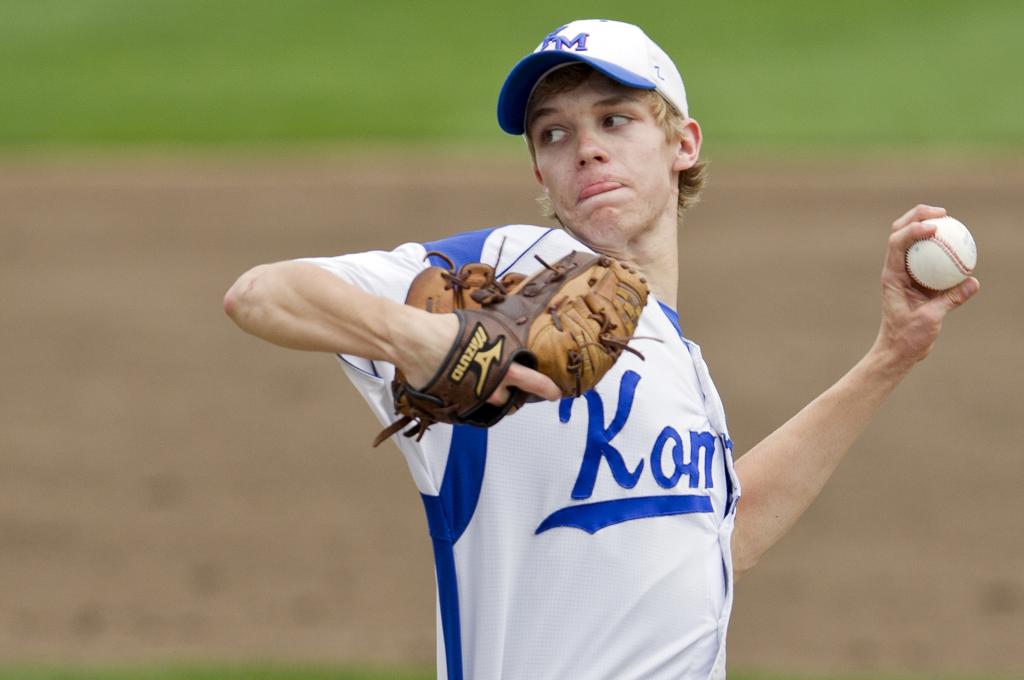 ST. CLOUD - Nobody sits in the Kasson-Mantorville dugout when the KoMets are batting. The cheering is constant and leans toward the wild side. Bird cackles and monkey calls are common.

Clearly, the KoMets are having fun. After a slick 2-0 victory over No. 1-seeded St. Cloud Cathedral Friday in the Class 2A state tournament semifinals, why wouldn’t they be?

“I am always shaking my head at the things they do,” coach Broc Threinen said. “I ask other coaches if they’re bothered by it. They usually say they wish their team would have that kind of energy. But you don’t work baseball. You play baseball.”

Kasson-Mantorville (24-6) had the unenviable chore of trying to beat Cathedral, a team with seven state titles and history of excellence. Plus, the Crusaders (24-3) rarely lose at St. Cloud’s Dick Putz Field.

That didn’t matter to KoMets junior Charlie Meyer, who pitched a game that would have made the Minnesota Twins proud, throwing strikes and pitching to contact. He gave up three hits and walked two. He only struck out one batter and was supported by nearly airtight defense behind him.

“That’s the way he pitches,” said junior third baseman Wade Starkey, who made the defensive gem of the game, snagging a low-line drive destined for the left-field corner and turning it into an out. “We’re always ready to get dirty for him.”

Starkey was one of three KoMets at the top of the lineup who drove the offense. Leadoff hitter Riley Donovan went 2-for-3 and scored both runs. Starkey, batting second, was 2-for-2 with a walk, followed by Jayden Prigge, who went 1-for-2 with the game’s only RBI.

Cathedral coach Bob Karn, a 43-year veteran, said that as the game went along, he began to sense that it might not be his team’s day.

“The way we were hitting the ball, I thought they would eventually start dropping in,” Karn said. “But every game has a life and a rhythm, and it gets tough to get high school kids to keep the same amount of energy.”

Perham 5, Watertown-Mayer 3: Perham pitcher Austin Erickson fouled a ball off his face in the second inning of a semifinal victory over Watertown-Mayer. After being checked by medical personnel, Erickson stepped back into the batter’s box and promptly singled, the Yellowjackets’ first hit.

Erickson’s ability to pick himself up and not only continue to play but do so successfully is representative of Perham (18-5) as a whole. The Yellowjackets aren’t pretty but they’re resilient.

“We’re not the best team in the field, but we fight and scratch and work hard,” coach Hans Hanson said. “Austin got slapped in the face and he came back tough. That’s what this team is all about.”

Erickson pitched a complete game, giving up nine hits and three runs without a walk. But the victory was more about team resolve than individual effort. All nine starters got one hit. And when three errors put them in a hole, they found ways to survive. “The key is to keep getting better and we realized we had to work hard to do that,” he said. “We’re playing our best right now.”

The loss ended Watertown-Mayer’s surprising run. The Royals (17-9) were the fourth seed in the Section 2 tournament but won eight of their last nine games to reach the semifinals.