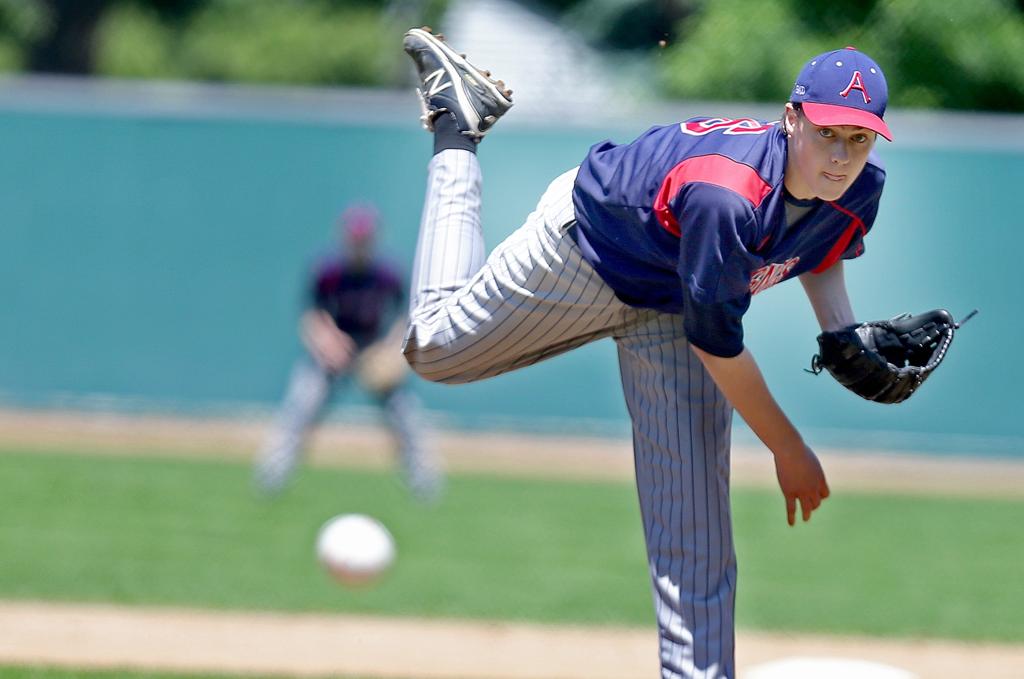 Jack Fossand threw his third consecutive shutout in St. Agnes' victory over Windom Area on Thursday. He has given up only 11 hits in that span. (Richard Tsong-Taatarii, Star Tribune photo)

St. Agnes junior pitcher Jack Fossand is tough to score on during the regular season. He’s at another level in the state tournament.

The righthander threw his third consecutive shutout in state tournament play, a four-hitter in 1-0 victory over Windom Area on Thursday in the Class 1A quarterfinals at the Mini Met in Jordan.

“What he’s done is amazing, but not surprising,” St. Agnes coach Mike Streitz said about his ace, who has allowed only 11 hits during his 21-inning scoreless streak. “He’s a gamer.”

The Aggies (14-6) shut out all three of their opponents en route to their second state crown in 2012. Fossand registered two of those shutouts against New York Mills and Lac qui Parle Valley.

“Knock on wood [about the streak],” said Fossand, who struck out only one and walked three against the Eagles (13-9). “I didn’t have my best stuff today, but I was able to locate the ball well.”

Junior Joe McDonald provided Fossand with the only run he needed in the bottom of the first inning. The designated hitter delivered a run-scoring single to right field with two outs, scoring junior Jake Gutzmann.

Windom Area seemed poised to score on Fossand in the fifth inning, But Gutzmann, playing center field, bailed him out with a strike to catcher Alex Kleve to nail pinch-runner Andrew Larson trying to score on a single by Jacob Johnson.

“My first instinct was this guy is going to score,” Fossand said. “Jake made a great play and throw.”

The Eagles were shut out for the first time this season. Senior Collin Lovell threw a complete-game five-hitter.

BOLD 13, Wabasha-Kellogg 0: Warriors junior Logan Sandgren knew he was going to have to be at his best going against the No. 1-seeded Falcons. He was — both on the mound and at the plate.

The lefthander threw a six-inning no-hitter, carrying BOLD past Wabasha-Kellogg in the first quarterfinal game. Sandgren also threw a no-hitter in his last outing in the Section 2 tournament.

“It meant a lot more today,” Sandgren said. “One loss here and you drop down to the losers’ bracket.” BOLD lost both of its state tournament games a year ago.

Sandgren struck out six and walked three. He and Will Greenheck of Wabasha-Kellogg were in a pitchers’ duel until BOLD scored eight runs in the fifth inning. The Warriors (16-6) entered the frame with a 1-0 lead on an unearned run.

“That took a load off my back,” Sandgren said.

Sandgren had his third consecutive hit in the fifth-inning uprising, a two-run single with two outs. He finished 4-for-4 with three RBI. Sophomore Trent Athmann also had a two-run single later in the frame.

The Falcons (17-2) had allowed more than one run only twice in their last 12 games. They aided the Warriors’ offense by committing five errors.

Osakis had its offense rolling from the outset, and junior Jordan Frederick was unflappable on the mound. The winning pitcher also drove in two runs with a double and scored three times in the first three innings when the Silverstreaks (19-2) raced to a 10-0 lead. They also benefited from eight walks and two hit batters during that time.

“We always want to jump on teams right away,” Frederick said. “We got that done, and from there we were on cruise control.”

Frederick and Kilar Zimmel combined to throw a three-hitter in the five-inning game. Frederick allowed all three hits while striking out five and walking one in four innings.

New York Mills 6, Floodwood 5: The Eagles had their fill of the consolation bracket the past two years. It took a seventh-inning rally to prevent another return.

Junior Daniel Kraft’s infield grounder with the bases loaded and one out in the bottom of the seventh scored Tyler Ehnert with the winning run. It was the only time New York Mills (20-2) led in the game.

Winning pitcher junior Brandon Kupfer, who went 2-for-3, tied it at five earlier in the inning with a run-scoring single with one out.

“I had to step up and be a leader,” Kupfer said. “I had to make up for the way I pitched.”